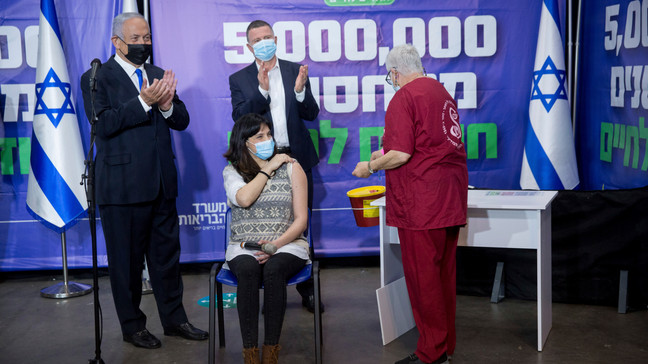 In Israel, its premier COVID-19 vaccine provider, Pfizer landed in hot water after listing one of its medical information centers as being located in “Palestine.”

This relates to the location of Herzliya, and it wasn’t listed as Israel, but Palestine.

Israel, according to the Pfizer interactive map powered by Google, has two such locations: In Mitzpe Ramon in the south of the country, and in the center of the country in Herzliya. 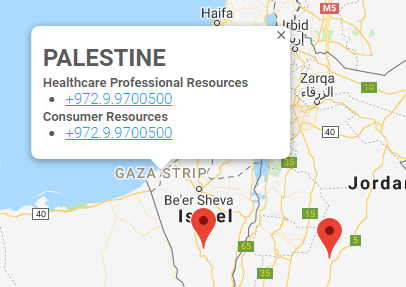 The Palestinian communications minister reportedly announced that the government is searching for an alternative to Google after reports claimed that the famous tech giant removed Palestine from its map application in July.

The Jerusalem Post wasted no time boasting that “Palestine” had never even been on Google Maps.

The Palestine Digital Rights Coalition, the Palestine NGO Network and the Palestine Council of Human Rights Organizations launched a campaign with the hashtag #GoogleMapsPalestine shortly thereafter in order to bring the label ‘Palestine’ on the worldwide maps.

It is likely that Pfizer is also dubbed Nazis as they have listed the locations as Palestine, and this is just another step from claims simply saying that Israeli settlements are illegal and so on, and so forth.

Until the same day, the Palestinian Authority, which administers autonomous areas of the Israeli-occupied West Bank, had received enough doses for only 6,000 people.

According to COGAT, the Israeli defense agency that orchestrated the vaccine campaign, the workers are not required to be vaccinated in order to keep their entry permits at the current time. But many laborers said their Israeli employers have pressured them to be vaccinated, and there were widespread concerns they could lose their jobs if they do not get inoculated.

About 100,000 Palestinian laborers from the West Bank work in Israel and its settlements, which are widely seen internationally as illegal and an obstacle to peace.

Maj. Gen. Kamil Abu Rukun, the head of COGAT, said in a statement that Israelis and Palestinians “live in the same epidemiological space” and that it was a shared interest to vaccinate Palestinians.

Human rights groups and many Palestinians say that as an occupying power, Israel is responsible for providing vaccines to the Palestinians. Israel says that under interim peace accords reached in the 1990s, it does not have any such obligation.

It could be that Pfizer listed Herzliya as “Palestine” to make it seem like Israel wasn’t an occupier and it had to fend for its own people.

PFIZER helps only by mistake….in all other situations is harmful.

Just Me
Reply to  Porc Halal

Pfizer vaccine has killed as many civilians as the IDF. It is a real kill shot.

BS … Israel is the FIRST country out of the Pandemic at the end of this month … just as the variants are raging … ever more virulent … eh?

An unknownable number of Russians are dead … eh?

So why did they do that than (if it is “not mistake”)? Why Palestine?

You’re a Nureyev clone … a real prima Donna or is that don?

Pfizer’s CEO Burla is a proud Jew … is he a Zionist or International Jew? pmsl

Your vodoo doesn’t impress me much … Covid? … checked … next

Hopefully the long term effects will plague your future health …

Jesus the Jew … is your god … now that’s funny

This is from Israeli National News;

Pfizer has stated the historical TRUTH. It has always been Palestine and will remain so.

The maggots copied Chinese vaccine, they claim it was a Mossad stealth operation, truth is China is the maggot Jews 3 rd.top trading partner and growing, Trump wasn’t really clued up on Israeli Chinese chummy relationship, Biden is and intends to strengthen China and Israel at the expense of the US economic empire, Biden is a traitor and Trump is a mind controlled straw-man, stacked up to be blown away by Globalisation. However China won’t wear it, and Xi Jinping is shutting the Globalist Plutocrats down because he knows China can do much better than Jack Ma.

You’re crazier than a loon …

Maggots you can call to your filthy islamic rats, you deluded old madafaka. I’ll give you a one way ticket to meet Allah, would you like that? you’re half way in the grave already.

Not a fan of Israel
Reply to  Helen4Yemen

Not a fan of Israel
Reply to  Helen4Yemen

The one on the right looks persecuted by what he’s seen his comrades do. The one on the left is a psychopath that will eventually turn on his own family and kill them…..claiming unknown “Palestinian terrorists” are responsible for the bloody carnage in his abode.

I’ve got your ticket right here. Says, “Admit One – Abyss”.

There’s this massive tentacled ‘thing’ there, it’s tentacles are grey and covered in white, oily slime. They will enter every orifice you have and rip a few new ones. Then it will eat you. Has very sharp teeth. Screams a lot in anger. Earsplitting, blood curdling screaming.

…and YOU get ta meet it. Ain’t you tha Lucky One?

Frankly, Pfizer is corrupt big pharma, but the use of Palestine could be a Freudian slip. Interestingly, despite the best Zionist efforts to erase the reality of Palestine, they have failed miserably. The land squat of Palestine will never be accepted by the world.

The very idea of Israel is a lie, sometimes it happens that even the most assholes remember it.

The level of glee and excitement about this is downright stupid. Fact, the state of Israel exists and is basically unopposed in its control over the territory. They sooner the Palestinians/Jordanian Arabs acknowledge reality, the faster peace can be achieved. Threats from Iran, and deployments in Syria by Iranian forces claiming a desire to eradicate Israel only worsen the regional situation for everyone, especially the Palestinians. The most influential leader has been Donny the Orange, who managed to string a Saudi-Israeli, gulf state coalition which Sleepy Joe will dismantle by 4th of the July of his first year in office.

The European Jews in Palestine are invaders just like the British in Kenya or the French in Algeria. The silly excuse these white Europeans used in the past that they are Israelite returning home has been rendered invalid since the DNA of the Ashkenazi = always 0% Middle Eastern. What are these European aliens doing in the Arab region? I dare you to respond.

They live there, they came to that land like many before them, like the palestinians you speak of. I am not interested in rehashing the insane debate about who shall inherit jerusalem. Here are the facts. Israel exists. It is strong. The people who live there plan to stay there, and further violence will not help the palestinians. take your soap box to some who wants to discuss delusional history.

Not a fan of Israel
Reply to  Aleks Noir

Israel is actually quite weak and her enemies know it.

Palestinians should acknowledge the reality they wish to see realised, not the reality european and russian colonists force down their throats.

Palestine is a reality and its not going away.

You are preaching the exact sort of delusional nonsense that has been costing Palestinians lives for decades. The state of israel is not going anywhere. The descendants of the land have changed many times over, and the current residents will fight to stay there. Further attempts to attack israel will only lead to death, and destruction, and will not help the palestinians.

Not a fan of Israel
Reply to  Aleks Noir

Israel is way more vulnerable than it makes out.

The idea of the alien European Jews were returning home to the Arab region is silly; the Arabs had never met or known of the these people until they “returned” with 0% Middle Eastern genes according to their own DNA. These Europeans managed to fool an entire world with their fake ancestry claims. https://i.imgur.com/h6nbHG1.png?w=300