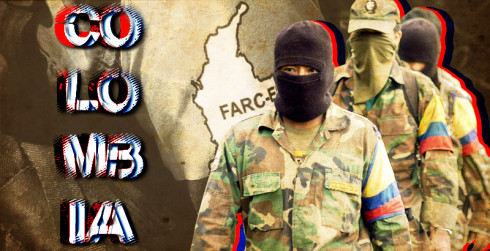 A week prior to the former guerrilla fighter’s electoral success, President Nicolás Maduro of neighbouring Venezuela paid an official two day visit to Iran where he signed an official 20-year cooperation agreement with Iranian head of state Ayatollah Khameini – a deal intended to counter the wide-ranging US sanctions targeting both Caracas and Tehran.

With one of Petro’s Presidential aims being to develop further relations with Venezuela however, his incoming Presidency has undoubtedly already been placed in the sights of the regime change lobby, wary that friendly relations between Bogota, Caracas and Tehran, will undermine US-NATO hegemony from South America all the way to the Middle East.

Indeed, CIA involvement in fomenting regime change in Latin America has a history stretching back more than half a century.

In 1970, at the height of Cold War tensions between East and West, the election of Socialist candidate Salvador Allende in Chile, and his subsequent nationalisation of Santiago’s lucrative copper mining industry and telecommunications sector, would quickly draw the ire of Washington.

With corporate interests at stake, and fearing that socialism would take root on its doorstep, a plan was hatched by the White House to remove Allende’s Left-wing government.

On September 11th 1973, a bloody CIA-backed coup was launched in Chile, which would see the death of Allende, officially by suicide but with foul play highly suspected, and the seizing of power by the US-backed General Augusto Pinochet, whose 17-year long reign would see the extrajudicial killing of more than 3,000 left-wing activists, and the further forced exiling of 200,000 more.

The instalment of Pinochet’s leadership would subsequently lead to the CIA launching Operation Condor, a Cold War initiative intended to halt the spread of Communism in South America via the covert backing of right-wing political movements in the region.

Like Chile, Bolivia, Paraguay, Uruguay and Brazil had also come under the rule of military dictatorships, Argentina following in 1976, with each receiving the full support of the United States.

Despite the end of the Cold War following the Soviet Union’s collapse in 1991 however, this US interference in Latin America would continue unabated,  most recently seen in 2020 when Operation Gideon, a failed Bay of Pigs-style coup attempt involving US mercenaries and most likely sanctioned covertly by the White House, was launched in order to remove the Venezuelan leadership of Nicolás Maduro – a long-time target of the regime change lobby since he was elected as President of the oil-rich nation following the death of Hugo Chávez in 2013.

Coming just a year after another failed coup attempt in the Latin American country, involving US-backed ‘Interim President’ Juan Guaidó, the motivation for Maduro to further develop relations with Iran, following Tehran’s May 2020 export of almost two million barrels on Iranian oil to Venezuela in order to counter US sanctions, should be clear.

Like Venezuela, the Islamic Republic has also been a long-time opponent of the US-NATO hegemony, when following the 1979 Islamic Revolution, the anti-American Ayatollah Khomeini would come to power, overthrowing the Western-backed Shah Pahlavi, who had himself been installed in a 1953 CIA and MI6 orchestrated coup launched in response to then-Iranian Prime Minister Mohammad Mosaddegh’s decision to nationalise his country’s vast oil reserves.

With striking similarities between both Venezuela and Iran in terms of nationalisation of natural resources, opposition to US Imperialism, and being subject to Western sanctions, it would only seem natural that both countries would seek to develop diplomatic relations, it would also only seem natural that with the election of Gustavo Petro in Colombia, and his campaign promise to normalise relations with Venezuela, that Bogotá may soon also experience the same regime-change attempts that have previously befell both Caracas and Tehran.

Last edited 7 months ago by Work At Home
-5
Reply

Last edited 7 months ago by Work At Home
-5
Reply

As we watch the US descend in chaos, welise that if we don’t cut ties as much as possible now, it will drag us all down with it…..

CIA, DEA, FBI using a subsidiary named CTU fomented a coup d’état last year (July 7 2021) in the Caribbean island country of Haiti. They used a group of Colombian mercenaries to assassinate Haitian president Jovenel Moise. Then the administration of Joe Biden placed a puppet in the name of Ariel Henry in power in the impoverish country, continues to armed violent gangs to keep the population under subjugation while putting the Haitian police corps under arm sanction. Actual Bolivian President Luis Arce said that same group of Colombian mercenaries were sent to assassinate him in December 2020, but the plot failed.

What’s in the menu is a regime change on USA and Canada. More or less in ten (10) years. Trump was a little bit a Galileo Galilei…

He didn’t stand a chance against the Swamp -Jewish big business- gave in -and still wont.

another defeat for the despised gringos

It’s just rich fuckers. We working class gringos don’t like them either.

Guaido is a walking corpse.

Monroe was a phony. They allowed the UK to steal the Malvinas.

Monroe was later friend. Bolivar Sucre were against European Colonialism, Europeans Empires succeded into divide Central and South into small countries and play machiavellic games inside them and put to fight each other the young stupid newborn america countries instead of helping each other. Even today in XXI Century you dont see nobody talking about Real America history they only teach History as Fantasy Games, wars were fought because national interests and they dont even had a clue to uncover the bigger role of external forces or the European Empires (France, Britain, Spain, Portugal, Netherlands) playing the biggest role in every war in Central and SouthAmerica. Then was USA and Doctrine Monroe, they are just the tip of the iceberg… but Central and South Americans even today are just biggest morons and morons dont deserve to being independent you must fight to your freedom and to remove fifth and six column, but you need to be clever and they arent.

How many times this happens in others countries. Colombia is the biggest infiltrated country in SouthAmerica, dont expect anything from Petro. After this Colombia short Presidential term (if they end) Colombia would be even more infiltrated. Every institution in Colombia is infiltrated, expect they would use the Justice Judicial Institution as they did in Brazil with Tomas Moro and Lavajato. The thing is Colombia citizens and public officers and servants loves bribes and you can infiltrate very easily with bribes. Also Military is run by CIA, the State Department runs Ministeries, CFR Foreign Relations are managed in Washington… dont expect anything from Colombia. Aaaaa you can expect Colombian Embassies Assistants to work undercover and pass information to their Masters.

Also Petro could be a CIA put them in charge in order to uncover all non aligned agents in SouthAmerica, Central America and Mexico. Should check his covers in Mossad, MI6, FSB and others intelligence services worldwide. Sleeping cells waking up in all Americas right now.

“that have previously befell both Caracas and Tehran.”