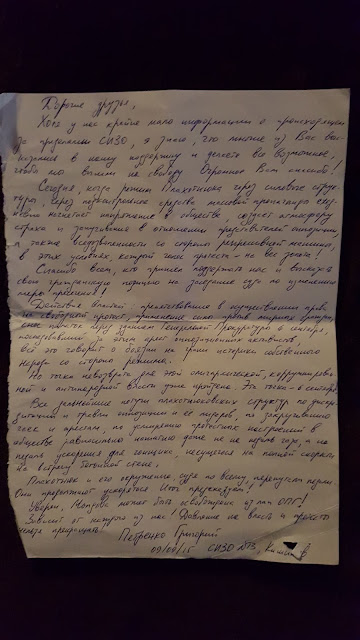 Originally posted by Aleksandr Petkov, translated by Greg Butterfield
Dear friends!Although we have very little information about what’s happening outside the prison, I know that many of you have expressed your support and are doing everything possible to win our freedom. Thank you so much!

Today, the regime of Plahotniuc, through government structures it controls and through media propaganda, daily inflames tensions in society, creating an atmosphere of fear and intimidation against members of the opposition, and permissiveness on the part of the repressive machine.

Under these conditions, every voice of protest is worth its weight in gold! Thanks to all who came out to support us at the court and expressed their civic position to change the measure of restraint!

The actions of the authorities – obstructing the right to free protest, the use of force against civilians, the demolition of the tents in front of the General Prosecutor’s Office on September 6, the ensuing arrest of opposition activists – all of this speaks to the regime’s hysterical fear of its own people.

But these oligarchic, corrupt, anti-people authorities reached the point of no return on September 6.

All further efforts of Plahotniuc and his minions to discredit and harass the opposition and its leaders, tightening the screws with arrests and suppression of protests, is equivalent to a race car driver pressing the accelerator while driving toward a concrete wall.

Plahotniuc and his entourage have apparently confused the pedals. They continue to accelerate. The result is predictable!

I’m sure that Moldova can be freed from the clutches of this mafia!

It depends on each and every one of us! The pressure on the authorities and the protests can’t stop!