The Peshmerga forces do not plan to leave the areas, liberated by them from ISIS terrorists before the start of the battle for Mosul city. 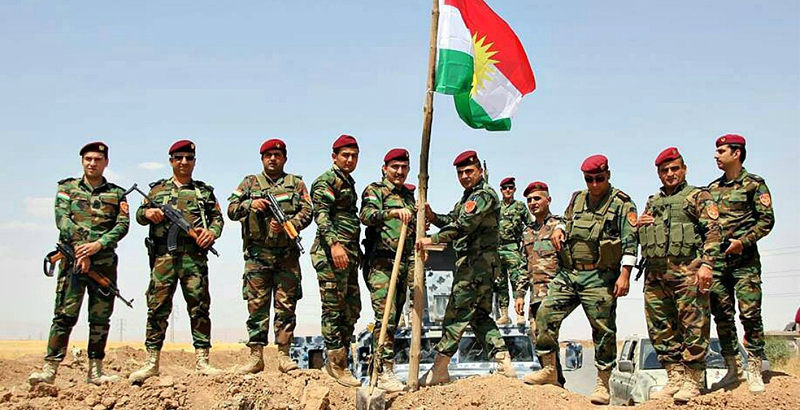 The Peshmerga forces are not going to withdraw its troops from the areas that they liberated from the Islamic State (IS) terrorist group before to start the battle for liberation of Mosul city, Chief of the Staff of the Kurdish Peshmerga forces, Lieutenant General Jamal Mohamed, said.

“The Peshmerga forces will not be withdrawn from the areas that they liberated before October 10, 2016 [the start of the battle to liberate the city of Mosul],” Mohamed said.

“Peshmerga sacrificed nearly 2,000 martyrs and [suffered] 12,000 casualties in the war against the Islamic State. The withdrawal of Peshmerga from these areas is not negotiable,” he added.

The Lieutenant General also noted the importance of a prospective agreement between Baghdad and Erbil, which is supposed to be concluded after the liberation of Mosul and will concern to the status of Erbil city, where more than 300,000 Kurds live.

The Mohamed’s statement indicates the first signs of an impending crisis after the liberation of Mosul city.

That’s good , just one SAA officer on site and any attack on Mosul , is an against the SAA . Bring in the Syrian and Russian air forces .

What would be the role of SAA in Mosul, Iraq?

My error completely , retract and apologies .

You see how peaceful and well intended are those Iraqi Kurds. Their treachery cost Saddam his life and lives of millions of Iraqis. The greatest irony is that they are actually allies of Turkey and of cause Israhell. How ISIS managed to capture Mosul is a mystery. You cannot entirely exclude possibility of Barzani’s complicity in the crime since his fiefdom was not affected the least by it.

When everyone fled, the Kurds were the only ones fighting. And it could very well be that there fighting saved Iraq. You and many others should thank them.

For what for being Zio and NATO stooges and causing carnage by giving an excuse to US and Israhell to impose no fly zone over Iraqi province populated by opportunistic predatory tribe with their chieftain Barzani?

“Causing carnage” ? They fight only ISIS, and accept all the refugees in the region, regardless of religion. In addition, every time someone brings Israel to the debate , it shows how very weak he’s argument is .

Read this to enlighten yourself on the topic. http://www.globalresearch.ca/empire-uses-kurds-as-pawns-in-its-imperial-pursuits-in-syria/5577978

The Iraqi army fled the entire north of the country when faced with an enemy they outnumbered over 20:1. Explain to me why they deserve to keep territory that they abandoned, as well as the civilians within it.

Abandoned? This is Syria and neither Iran, Turkey or Syria will allow a subset of their country to be carved out for an independent fiefdom nor theft of or claim to natural resources or independent rule outside of National control. Barzani has already collaborated with Turkey for oil sales and control of territory and free passage of ISIS oil theft and transportation to Turkey to be sold in Israel through the Erdogan clan for war profits.

Barzani will not be able to make peace and will seek out US support against Syrian coalition and will be abandoned and eradicated as ISIS as we speak. Kurds only salvation will come from the good will of Syria and nothing less or more.

Ah shut up with your Saddam => he was planted in Baghdad BY THE CIA. He was the USA/CIA instrument to try toppling the Mullachs in Tehran in the ’80s… And he f*cked it up,. After that he let himself trapped into the OK given by Herbert Bush-SR, as he asked the CIA-goon if he, Saddam, MAY occupy Kuwait, what anyway WAS an IRAKI province stolen by the Brits for a friedly Arab family to make that punks Kings. Bush-SR said YES!,… and after that the CIA-criminal & US President yelled by the UN that Saddam occupied “a sovereign State” + the whole Propaganda-Bla-Bla (we see the bla-bla it in Ukraine now) Bush-SR’s CIA didn’t need SADDAM anymore, so they sacked him, that’s all.

Treacherous Kurds, my a++. I’m German and I don’t give a sh*t on Turks, Kurds, Arabs and WTF you have there, BUT LET’S REMAIN BY THE TRUTH !!! Treacherish? Well go and BOMB the USA because England’s COLONIES were treacherish with The King George IN LONDON :-)))) Get lost!

It seems like you are redefining the meaning of the word Truth. And mate yelling only discredits the value of you arguments. It looks like you still haven’t learned that Sadam had no weapons of mass destruction. Reed this and be rather wise than otherwise. http://www.globalresearch.ca/empire-uses-kurds-as-pawns-in-its-imperial-pursuits-in-syria/5577978.

WHY do we even bother anymore, why.

The Arabs cant handle anything other than crimes and violence, look at them, back stabbers, liers and fakers of everything, can trust this scums, for an second.

One day, white people, if we dont take an stand for our own, we will die of, and the Arabs and the Joos will take whats our, do not truts anyone of them, I have had anof.

How rotten can one possible become, and why on earth do we even bother to do anything, let the wankees do what they want, they dont even care them selfs, so why the f…. should we. My faith in them as humans have evaporated completely, and this bitch is an symptom of how deranged and how deeply into evil this rats have sunken. I hate you so much it hurts. This is the same as in Norway, they do the same, kill anything that they dont like and peasants have an liking for exterminations of anything that they find to be “wild”. This bitch only punishment should be to equal the scores, crush Her knees and dump her in the desert, if you dont do that Arabs, you will be my enemy for eternity.

I have no more to say, from now on Arabs I will hunt you down, when the great war comes, every one of you should hang, along with the Khazarian inbreeds like the Norse Khazars whom is ruining our land, the entire Gov. is Joosih and should be hanged as traitors to our race, and the same in Sweden and Finland,Joos is ruining our countrys. Time, people, is coming to an end, if we are to survive, we have to take up arms and fight back, never again let the MSM dictate anything, if they try, burn them down, along with the police, witch is even worse traitores, corrupt scums, our politicians is 100% controlled by Israel and the wankees, and hunt them down in our lands, since they are Jooish/Khazars aka fake Jews, hunt them down and hang em all, its either them or us. You know I would not state this without any reason, and the reason is treason, we are been killed, one by one, brothers and sisters, we must awake, before its to late.

And dont think I am like this rat, like the Israeli hang-around and bitches like Breivik whom isnt anything than an man allowed to do what He did, why do you think the MSM never writes about the Jooish friends He had and the one that fleed to an kibutzh in Israel, because the Norway Gov. knew about this and made this to happen, we are under ocupation of the Joos, been that since 1945, and now, they let the Arabs into our lands and look around, what do you see, evil, and nothing else, we are been spitted upon, raped and robbed and even then our Jooish Gov. tels us its OUR fault.

wake up and fight back

Kills me how morons like hvaiallverden — incapable of spelling or writing a proper sentence — believe they have any intelligent opinion to contribute about world affairs or anything, for that matter.

Just come to Germany and take a walk with your wife/daugther/ in the evening thru Berlin-Kreuzberg (Turkish-Arab-getto). If you come out alive and your “chick” unf**ked.., you may tell us a lot of other stories … sponsored by SOROS & other NWO goons.

Get back to me when you graduate the third grade.

“The Arabs cant handle anything other than crimes and violence, look at them, back stabbers, liers and fakers of everything, can trust this scums, for an second.”

Imagine that almost exactly like you, a Lebanese SUNNI (!!)-guy explained to me the things, too. He just added that they grab you on the neck and strangulate you, even if you helped them, if you aren’t “on “stand-by” alarm-level all the time”. By the USA it’s called … “DEFCON 3” ;-)….

Kurd’s fight for Israel and Turkey and Mi6 and CIA. The ISIS threat was short lived, now the monster in the room must be dealt with. The Kurd’s are expansionist just like the Jews are. They have tried many times to conquer Iran, Iraq, Syria and Turkey. Time for full on anti-terrorist operations against the Terrorist-Kurd’s. http://en.farsnews.com/Default.aspx

Hey Erdogan… give us a break ;-) As your shalvari-punks still were around Turkmenistan in ASIA, with their sheep-flocks, the Kurds lived in that area. :-)) And that was even BEFORE the Roman Empire, you comics-figure. Yes, KURDS do so as they would be allied with somebody, but in fact they use foreign interests in the region TO KOOK THEIR OWN SOUP => a Kurdish Country. You the Turks are the invaders, they are LOCAL POPULATION, you cheap troll