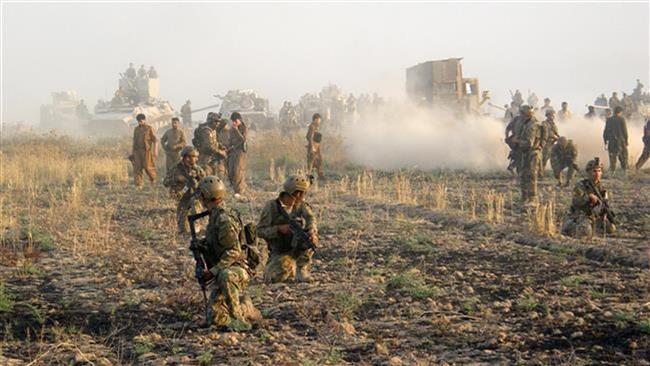 Kurdish Peshmerga troops deploy during a military operation to regain control of some villages from Daesh militants south of the oil-rich city of Kirkuk, August 26, 2015. (AP)

According to an Amnesty International report published on Tuesday January 19, Iraqi Kurdish Peshmerga fighters are intentionally bulldozing, blowing up and burning down thousands of houses belonging to Arab communities in northern Iraq. The report says it is in an attempt to “uproot” Arab existence in Kurdish-held territories.

The report said the mass destruction led by the Kurdistan Regional Government (KRG) and Kurdish fighters in three Nineveh, Kirkuk and Diyala provinces to take revenge for the Arab communities for their alleged support for the terrorists groups as Daesh/ISIL/ISIS.

Amnesty said that the report was based on field investigation conducted in 13 villages, testimonies of 100 eyewitnesses and victims of forced displacement, and satellite images.  The report also said that KRG forces were also barring “tens of thousands” of Arab civilians, who fled from Daesh and wanted to return at their homes.

Amnesty’s senior crisis response adviser Donatella Rovera said, “By barring the displaced from returning to their villages and destroying their homes, KRG forces are further exacerbating their suffering.”

Amnesty also said in its report that the last two years of forced displacement and deliberate destruction of property without justification “may amount to war crimes.”

Since Daesh/ISIL/ISIS launched its offensive in Iraq and took control of portions of the country in June 2014 horrific violence has plagued the northern and western parts of Iraq ever. And KRG is the main ground fighting force that fighting efficiently against the Daesh/ISIS/ISIL terrorists.

The Kurds have always been Terrorist. The news just do not carry their atrocities, because they are favored by Mi6 Mossad and CIA. The Kurds should be fought same as the Salafist.