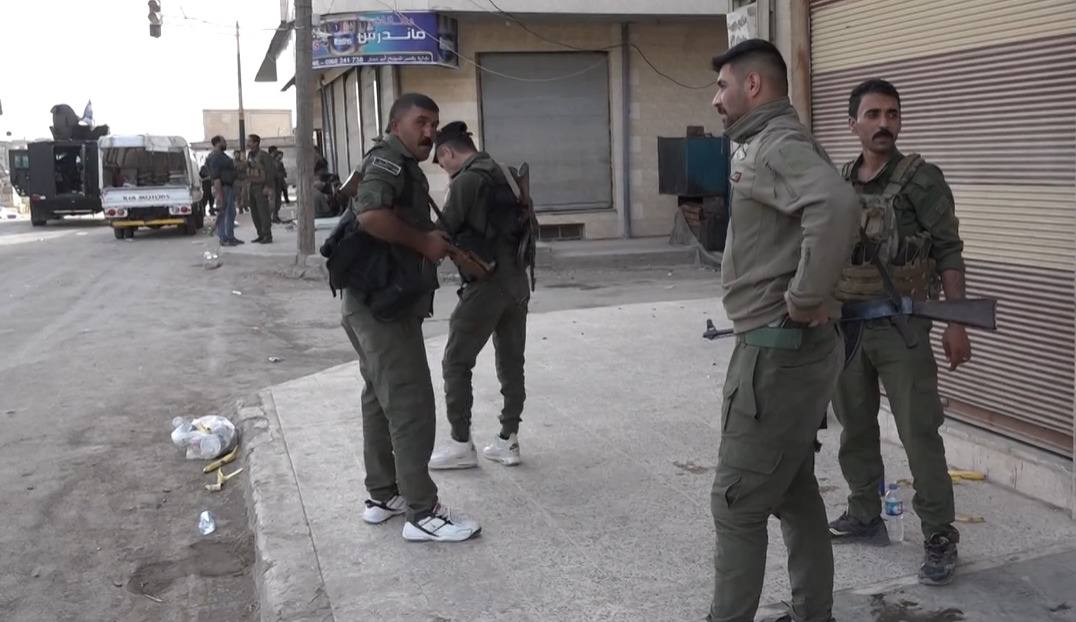 Screen grab from a video released by the Hawar News Agency (ANHA).

Late on April 20, heavy clashes broke out between the pro-government Syrian National Defense Forces (NDF) and Asayish, the security wing of the US-backed Syrian Democratic Forces (SDF) in the northeastern Syrian city of al-Qamishli.

Asayish claimed that NDF forces attacked one of its checkpoints near the Tayy district in the city. An officer known as Ahmad Hajji was killed and four others were injured in the incident. Asayish responded by launching a large attack on NDF positions in Tayy.

The claims made by Asayish were later refuted by Sheikh Mohamad al-Fars, leader of the Tayy tribe in al-Qamishli, who provided details on what exactly happened.

Al-Fars told the U-News agency that Asayish personnel opened fire at the leader of NDF units in Tayy while he was driving a sick person to the hospital. The leader was accused of violating a curfew imposed by the SDF as a part of preventive measures against COVID-19.

In the course of the clashes, which lasted until the morning of April 21, Asayish units captured a number of NDF posts. Four fighters of the pro-government force were injured.

The clashes calmed down following an intervention by the Russian Military Police, which have a base in al-Qamishli Airport. The NDF and Asayish are reportedly in talks now to de-escalate and restore stability in al-Qamishli.

While this was not the first round of clashes between the NDF and Asayish in al-Qamishli, it was certainly among the most violation. The city, which is divided between government forces and the SDF, is still far from being stable.

Actually “Mai” killed 10 trillion. Why be so conservative with your numbers?

drink some cow urine maybe it will help you

So you are proud of those japs killing innocents? And when did I endorse Mai?

Hard to get good numbers. It also was in two stages where Manchuko was number one. Its also difficult to see the numbers killed by and because of Shang Kai Sheck and Mao.

But facts are millions were killed and probatly many more then 8 milions by the Japanese.

The Court of the Syrian People will be called one day to decide, who among the Kurds has earned the privilege of being a syrian citizen, and those who have collaborated with the enemy, for the latter the only possibility of salvation will be escape to America or Isisrahell , which of course will abandon them to their sad destiny, the punishment will be terrible.

There is no Syria only a printer voting for the baathiosts and Assads driven by propaganda, bajonets and corruption.

turkey, syria, iraq and iran must put an end to the kurds’ meddling in middle east politics, all at the behest of and in favour of the jews in palestine. the latter need to be sent to hell from the palestine they illegally occupy and where they are busy carrying out a ethnic cleansing and operating death camp Gaza. how long will it be before the world wakes up and says enough is enough and kicks the jews to an early grave.

Kurds has those rights as anybody else.

The bottom line is the SDF are US quislings,at some stage they will have to be crushed.

Most people´in the whole world dont see that at all. They are even able to see, whas worse then the SDFs.

A personal dispute was it, they must have had quite a few of those recently. A few weeks ago Asayish forces arrested a member of the Syrian Security Agency for unknown reasons, in response the NDF promptly arrested several members of the Asayish forces, that dispute was also resolved with Russian assistance but no explanation for the dispute was given. I suspect this is just part of the ongoing dispute between the Syrian Government and the Syrian Democratic Council [SDC], the SDC are constantly accusing the Syrian Government of undermining their authority and sowing discord among the civilian population, and every now and again they do something like this in response. But what the SDC call undermining authority and sowing discord in the region, could also be described as pro government factions simply garnishing support for Assad’s Government and it’s institutions. The SDC don’t like Assad’s side offering the people an alternative, they think their way of doing business, conducting trade, and supporting social institutions is the only option the locals want. But obviously some of the locals think some of the options Assad’s offering are just as good or even better than the ones the SDC offers, otherwise the SDC wouldn’t have any reason to hinder the Syrian Government. So much for democratic principal in the autonomous zone. Sometimes sections of the NDF forces act more like hooligans than security forces, and in those cases I usually condemn the NDF, but I don’t think that’s the case in this situation, I think this is more of a case of Assad gaining too much support from the locals and the US and SDC/SDF are becoming resentful of that fact, and possible just a little scared Assad will gain even more popularity. Too many people are writing off northern Syria as a lost cause, but Assad isn’t, he’s working really hard to try and bring all the Syrian people back to the same fold, so hopefully this most recent dispute is just another little hiccup in that process.