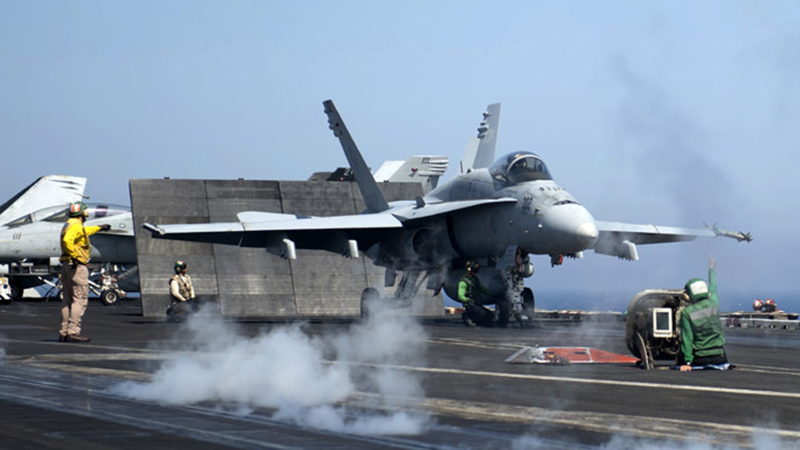 A picture released by the US Navy shows an F/A-18C Hornet assigned to the Rampagers of Strike Fighter Squadron (VFA) 83 preparing to launch from the flight deck of the aircraft carrier USS Dwight D. Eisenhower (CVN 69) on June 17, 2013 in the Mediterranean Sea. (AFP Photo/US Navy) / AFP

Pentagon spokesman Navy Capt. Jeff Davis has said that the United States is ready to shot down Syrian government warplanes over the city of Hasakah in eastern Syria. The United States also scrambled warplanes near Hasakah, after Syrian SU-24 attack aircraft dropped bombs “dangerously near” the US Special Forces sericemembers deployed with the Kurdish People’s Protection Units (YPG) in the area.

On August 19, two Syrian Su-24 jets struck Kurdish positions in and near Hasakah amid heavy fighting between forces aligned with the Kurdish Democratic Union Party (YPG and Asayish) and the National Defense Forces loyal to the Syrian government. (MORE DETAILS HERE)

According to Davis, the strike came close to US Special Forces operators, who were embedded with the US-backed Kurdish forces. No US servicemembers were wounded in the bombing. But, they were forced to retreat from the area.

This also proves one more time that there are no some “Syrian Democratic Forces (SDF)” on the ground in Syria. The SDF is just another brand for the US-backed Kurdish units.

US scrambled jets over N. Syria after 2 Syria Su-24s bomb dangerously close to US SOF on the ground. Say Dod Spox Capt. Davis.

Davis said that when the air strikes began, the “coalition forces on the ground” tried reaching the Syrian planes on a common radio frequency, but failed to do so. The US-led coalition then reached out to the Russian military, using a previously established channel, and the Russians confirmed their warplanes were not involved.

If the US decides to shot down Syrian warplanes, this will makr a new wave of escalations in the Arab republic with involvement of various foreign and foreign-backed forces. It’s important to note taht the presence of US forces in Syria is illegal under international law because they have no approvement by the Syrian government.

If they prove Russians Syrians Iranians ‘ll fight back!

my blood boils too, if I could fight back I would.

I hope Russia finally shows what their systems are capable.

russia will not do anything

They will start a new round of talks

Amers shouldn’t keep their soldiers so close to SAA positions and far away from their supposed enemy ISIS, they are there illegally anyway… obvious provocation. :/

They are there because they need Combat Control on the ground to conduct airstrikes, kinda like the Russian guy that died last year calling in strikes on his location when he was about to be over ran.

I do agree with the point we are not invited and should not be involved. But I am pretty sure no one has ever invited these guys to come vacation on their homeland.

They’re merely acting tough. If they try to do that the S-400 will shoot them from the sky.

MahmudH
Reply to  Death to Israel

The Russians haven’t shot down the Israeli jets flying around Syria, they won’t shoot down the American ones.

I think they last shot down a Syrian plane in 2014. But they do attack targets on the ground.

found it. but it happened 1 year before russians got in. and for some reason I am pretty sure they are in coordination with russians over there.

Indeed. I think the only circumstance the Russians would shoot down American planes in Syria would be if they think their military base is going to come under attack. Otherwise they’re cooperating a lot behind the scenes, so nothing is going to happen like that.

true, russians wouldn’t risk such a big action. and neither americans would. too risky in contrary to the dividents.

It will not. Russians won’t risk being the ones who started a conflict like that just because they’d shot down a few Syrian planes. NATO is waiting just for that, mind you.

If something like this happens (Americans shooting down Syrians), I would expect Russians will exert pressure, diplomatic and otherwise, to stop the fighting rather than getting themselves directly involved (and perhaps later sell some of those “old” S-300s to Syrians).

The peshmerga protect the US oil trade in Raqqa/Mosul, timing indicates Stephen have Putin Intel on the Kurds in Syria because he also used to aid IS so it’s definitely getting real!

Presumably the Syrians are doing this to get Turkey on side. If the Turks decide to switch sides and help the Syrians, none of the rebels and none of the Kurdish factions will stand a chance.

To the SF editors:

IS this blackmail? You want the site to change its neutral reporting line to be another Washiington propaganda media.

apparently, that is just what ‘D’ wishes…. I live on America (not ‘in’)… and I am very tired of the USA,Inc. private corporation spreading its crap (terrorism and war for profit) around the world. Isn’t about time the entire world (the parts not controlled by the Rothschilds and associated ilk) wakes up and confronts the evil?

Watch Fox News and u will get what u desire.

That’s the reason you should donate.

It IS Russian so that’s understandable. You have to read the articles with that in mind. They do provide pertinent information about the ongoing conflicts which are totally ignored in the western MSM, which is totally left-wing globalist propaganda. You have to assume that they will be biased and make you’re own judgement about the content. I find this site to be very resourceful.

Of the two adversaries, the Pentagon and the Syrian Air Force, only one of them have a right to be there. Hint; it isn’t the Pentagon.

Like I said before: the Syrian government must protest every single violation of its territory and airspace by the U.S. military. And present it to the U.N. Security Council. And Syria must speak of invasion at every possible opportunity.

But the Russians are way too stupid to pursue a sensible policy. Their conduct is haphazard at best. Having been bludgeoned with “invasion into Ukraine” for preventing a bloodthirsty from “murdering his own people” instead of negotiating them, they still have not learned enough!

They ought to have hit back at the U.S. for the invasion of Syria, for the support of the warmongering Saudi crime family. Instead… what did the moronic Russians do? They voted for an outrageous one-sided arms embargo against the Yemeni government, which was being attacked by the Saudi abominations and their Sunni minions…!

yeah sure
Reply to  Antikapitalista

Dude, Russia has some 150mil (less) people, NATO+Japan/Australia/Saudis and all other american vassals and azzlickers – at least 10x more. They are a few miles near St.PEtersburg, They are in Ukraine and Georgia, they are f-ckin everywhere. Russia is NOT USSR, their strategic postition is terrible. They can’t win a conventional war against the west, and even their nuclear options are more limited, americans can easily destroy european Russia with nothing but their airplanes and ‘defensive’ tactical missiles. IMO Russia should completely abandon Syria and focus entirely on Ukraine.

Blah aka Piglet
Reply to  yeah sure

NATO (North Atlantic Terrorist Organization) lacks the forces for a ground invasion of Russia – ask Corporals Bonaparte and Hitler about supplying troops fighting in Russia during the winter.

Why would the west want Russia-it’s full of Russians.

And more valuable raw materials than any other country on Earth.

Reallyseriousnews
Reply to  yeah sure

Population wise they are out numbered, equipment wise yes they would also be out numbered if the US abandoned everything else which is highly unlikely. The US and NATO have been stretching force’s thin and would have trouble constructing an decisively stronger ground force in short order. As for air asset’s even if they were not repelled by S300/400 systems and naval surface ships (unlikely), they still can only penetrate so far into the mainland aka combat radius from last point a fueler can fly. Fuelers are easy targets and must be kept well out of range of air defense and interdiction. Aircraft also require heavy logistics for any sort of prolonged air war which will provide a limiting factor to avaible sorties. Which brings me back to first point, in order to supply a strike force for a prolonged period of time requires that heavy transports be diverted from supplying all the other bases, outposts, and on going operations. Overall it would be a stalemate unless it evolved into throwing really heavy rocks across the pond and at that point no one will really “win”.

The us having soldiers close enough to whine about makes me wonder what part they played in getting fighting started between the ypg and ndf.

“Pentagon Threats to Shot Down Syrian Planes over”…. SYRIA! Because we can! Murica fck yeah!

“Pentagon spokesman Navy Capt. Jeff Davis has said that the United States is ready to shot down Syrian government warplanes over the city of Hasakah in eastern Syria”…Under what authority the United States is INVADING the SOVEREIGN country of Syria?, It is the LEGITIMATE Syrian government that SHOULD SHOT DOWN the INVADERS FORCES by using their S-400.

“warplanes near Hasakah, after Syrian SU-24 attack aircraft dropped bombs “dangerously near” the US Special Forces service members deployed with the Kurdish People’s Protection Units (YPG) in the area”…The BEST EVIDENCE that the UNITED STATES is a COUNTRY THAT SUPPORT TERRORISMS.

We need saddam back to gas the fuk out of them

Now that the scales are tipping against the jihadists CIA will use their last ace in the sleeve – incite trouble between the Kurds and everybody else! If the Kurds decide to make trouble now, at least they should be aware that they are being used in the imperial game of “divide and conquer” and should that fail for any reason they will be discarded onto the rubbish heap of history. The Kurds should remember that the US likes to lord over their allies in peace time, but when the going gets tough they have an almost compulsive history of dropping their allies in the end, surrounded by hostile neighbours! Bad move!

Assad and the kurds need to deescalate. The kudish issue will be negotiated after.the jihadis are defeated and the future of Syria is decided.

I hear the leader of the NDF in this spt is a gangster and a criminal-not good, but the Kurdish -arab police are fools too. Both need to be pulled into line.

Syrian is defending its sovereignty against US and its terrorists allies, Russia must help to blow -up terrorist US jets entering Syrian air space.Terrorist US must be fight to the end of Syrian blood.

Why isn’t these clear acts of unprovoked attacks against Syria being debated by the Congress?

The United States air-force always protecting the terrorist forces of the SAS, Kurd’s and CIA. Somebody deal with this menus. They are ripe to be crushed in Syria once and for all. If the combined forces of Iran and Syria and Lebanon and Russia and China cannot deal with 400 enemy combatants in eastern Syria, then they hold no face and they are already defeated.