US supply troops have started an experiment on deployment and supply of troops, operating far away from the major bases in Germany. 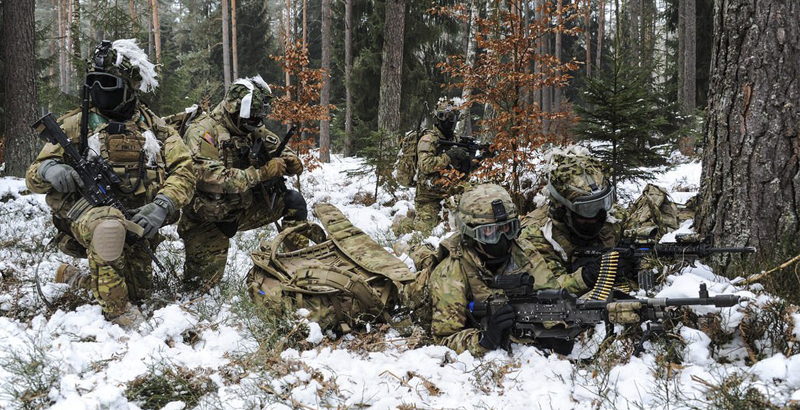 While combat troops of the US Armed Forces are engaged in demonstration of its power in Poland and the Baltic States, supply troops of the European Command have started the biggest, since the Cold War, experiment on deployment and supply of troops, operating far away from the major bases in Germany, the Izvestiya newspaper reported.

According to Commander of the 21st Theater Sustainment, Major General Duane Gamble, in the next nine months, his subordinates will participate in at least 80 military exercises. In the course of the drills, responding to crisis situations and cooperation with military from various countries, members of the alliance, will be practiced in the framework of Operation Atlantic Resolve for protection of Poland and the Baltic states.

A basis for the military exercises will be the 16th Logistics Brigade, which is the main ‘striking power’ of the 21st Command. It is intensely being prepared for action on unfamiliar territory, where is no developed infrastructure of NATO – in the Baltic States, Poland and Romania.

A few days ago, the Jane’s information website reported that the brigade has completed the unloading of transport and attack helicopters, arrived by sea to the German port of Bremerhaven. Twenty four Apache helicopters, 94 Chinook and Black Hawk helicopters, as well as 350 pieces of ground hardware arrived to Europe. The most part of the hardware will formally remain in Germany, but, in reality, the consolidated squadrons will in rotation be sent to forward bases in Lithuania, Poland and Romania.

According to commander of the 16th Brigade, Colonel Michel Letcher, an ultimate goal of the all current efforts is “deterrence against Russian aggression.” At the same time, US military faced a number of challenges in Eastern Europe. Firstly, this is an underdeveloped road network. In particular, it was found out that railways in Lithuania were built according to the Soviet standards and have a wider track that greatly complicates a process of transportation of military hardware.

As official media outlets of the Pentagon reported, during the recent Trident Junture military exercises, some problems with refueling of vehicles also occurred, as the fuelling equipment is not standardized, and a US tanker cannot transfer fuel to a Polish truck.

At the same time, supply troops are engaged in a struggle against bureaucratic difficulties that are associated with the need to cross national borders in the course of the troops’ dispatch. For this reason, a specialist was directly sent to the US Embassy in Tallinn in order to deal with a problem of the displacement in collaboration with diplomats.

As director of the Center for Strategic Studies Ivan Konovalov told the newspaper, the intensification of actions of the US supply troops in Eastern Europe should not be considered as a sign of preparation to the war against Russia.

“The forces are too much unequal, and the new US administration understands an absurdity of the idea of a conflict with the nuclear power,” Konovalov said.

The expert noted that these events should be seen as another way of the US to demonstrate its seriousness to the NATO allies, which “cannot cope with the panic after the Ukrainian events.”

Went to Eastern Europe, ….ran around in the snow, Got drunk,….got stoned. …..went home.

sweet i want to go to austria for a few months get stoned and run around in the snow, hopefully before it all turns to dust

This should be accompanied with serious dialog with the great Russia.What the world needs is a treaty that respects great powers borders. NATO doesn’t respect Russia borders. America has our borders secure. Russia and China has a right to have theirs secure. And come on if Russia wanted to attack Europe why would they care about sanctions?

NATO is preparing war, there will be a tipping point where Russia will have strike, it must be getting close. The strike will be nuclear at the heart of NATO, Washington DC.

Put the gun back in the holster Doom. It ain’t anywhere close to the time to have a shoot out.

If Russia placed troops on US’s border it certainly would be, so why would Russia be any different? You obviously do not understand the reality here.

Just look at the US media hysteria when there is ONE Russian intelligence ship off the East Coast in international waters. What the US needs is a coup in Mexico financed and armed by Russia/China/Iran combine. Then the troops of these countries can always exercise across the Rio Grande and have some room to test their new missiles and tanks. Then there is always Cuba to teach the US some 21st century lessons in Geopolitics and Geography.

Sorry , its all just chest beating , putting the boys out in the bush , is just a big “Boy Scout” operation intended to keep these visiting troops out of the bars of their host countries ( at least some of the time ). When they go home in six months , they need to have a little cash still in their wallets to show the wife .

And Russia will receive 5000 nuclear packages on its territory. Yep, thats a win, win situation.

U stupid agresive polish warmongers in tandem of Tel Aviv , will get 500 nukes. Happy now?

Warmonger? Polish? What are you on about mate? But thanks for asking, yes, I’m a very happy born and bread Australian. With your psychotic behaviour, the world seems to be in good hands.

Well, you know its your fault that WWII started. Had you just surrendered your country to the both of your neighbours, it would just have been you getting destroyed.

No, in earnest, if preparing to defend is being a warmonger, it is very honorable and smart to be a warmonger. It is a pity that we don’t have more “warmongers” in the West.

500 nukes on Poland. Carbombs on your head.

true. If Poland acts as a staging base for a NATO invasion of Russia, in all likeness it would be nuked on day one. Americans, Brits and the like have never had much worries for countries like Poland, Czechia, Hungary or Romania if war ever breaks out. It’s amazing how eastern euro countries are easily manipulated into getting killed in place of anglo-saxons, and also how naive they are into believing that they are treated as equals inside NATO.

The only countries the US considers less expendable than the others are the english-talking ones – UK, Australia, New Zealand and Canada (maybe a little less). Israel of course is on par too.

Obviously you haven’t figured out sarcasm, it is what it is. But I’d rather get 500 nukes then 5000, a win win situation. Have a lovely day.

Yes and the sheep in the US won’t be watching it on TV if anyone is insane enough to press the button. Hope they don’t forget to duck and cover.

It’s a good thing I don’t reside on the North American, nor the European continent.

Doubt it as this is just a limp dick waving exercise. Maybe if they put a couple of million on the border.

The reason I dont comment on this, is that its somehow, just let them do it, whom cares, and beside its vital to any army to have an logistic capacity that can step in anywhere, anytime, that, body boy is the essential of long distance war fare, and some few other issues as to make things that actually works, in winter time its much worse, metal snaps just by hammering on it with an hammer, no sledge is needed.

The Russians knows this much better that you do. In the early 80 I was in the Military, yup, hehe, the realty we faced if an invasion did come, was mildly put, bad, half of our troop, expected to be dead within the first 5 minutes of the full assault, and within an full hour, and you where still alive, you are an veteran, from an full brigade, to an quarter of it, and all our task was to hold the red army for 12 hours, that was the expected life time of our entire brigade.

And we beat the crap out of everybody else, incl the Wankees. Yeah, why do anything against them when they would make an clusterf…… out of it them self (Yemen), and I think they arent any better to day, fighting 3 world dungeons, with full air-superiority, makes you grow balls that really dont fit into what you will expect attaching Russia. And I havent mentioned the terrain, huh, good luck with that alone, wankee.

And the second, this is way to small to do anything, this Brigade in the BallTicks, other than been target practicing for the Russian forces. But the hype of the presence is staggering, militarily its an joke, the boat show dont impress me an bit, big, big, targets, yeah, I wouldnt sit in one of them at all.

But again, we can hope the Wankees sobers up, the rest whom is more or less a pack of limited hangarounds, turn coats, traitors and downright cowards, letting their land be invaded, to the brink on an civil war, within. huh

Its the Ukrainian and the Syrian theaters that will eventually show us what we have against the whole humanity. And we have only one problem, and thats the Imperial banana republic uSSa. And everybody knows this. And all we are feed is bullshit, and everybody knows that to. They try to re stack the heap of manure but its still manure, wankees. Same shit, new wrappings dont impress me either, wankees. Go home.

Not a real winter this year, thanks to burning 6000 ISIS oil trucks and numerous oil wells in Syria.. Add all that dust from bombing and there is the source of some real global warming. California got plenty of rain and the lawn sprinklers will be turned back on.. Maybe next winter will have more snow. That will sober up those NATO boys.