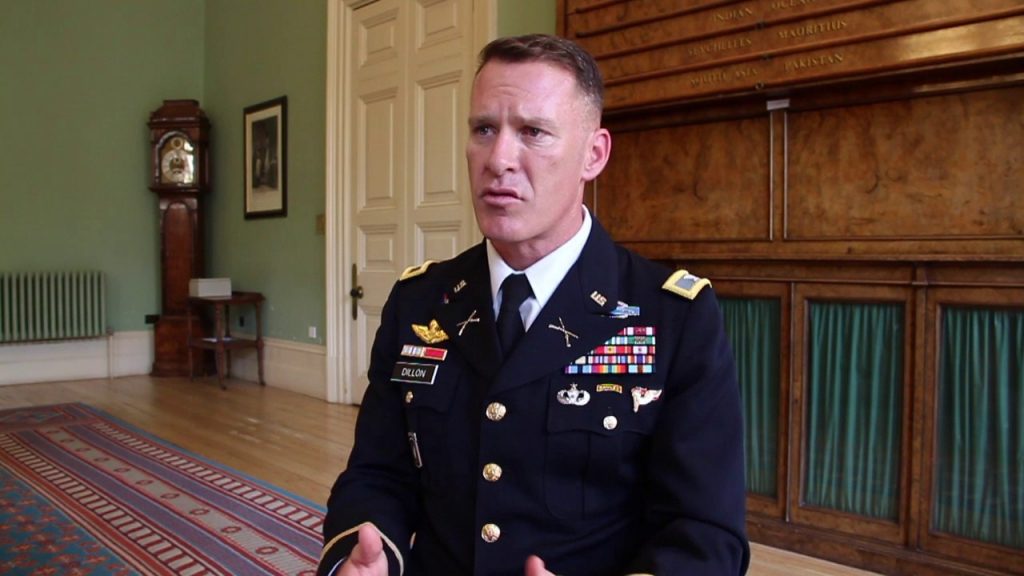 On Thursday, spokesman for the US-led coalition Col. Ryan Dillon said at a press conference that the current number of ISIS fighters in Syria and Iraq is only 20,000.

Col. Dillon also confirmed that the US-led collation had dropped support to the Shuhada al-Qaryatayn Brigade. The group had allegedly patrolled areas outside of the de-escalation zone and engaged in activities not related to fighting ISIS without the permission of the US-led coalition leadership.

On July 23, Shuhada al-Qaryatayn Brigade, announced that it had cut off its relationship with the US-led coalition because the collation refused its attacks on the Syrian Arab Army (SAA).

How the hell does ISIS/rebels get so many members? Most of the Syrian population lives under Assad’s control and supports Assad. Most of these ISIS/rebels can’t be Syrian! There’s NO WAY!

I wonder what the survivors will do when they return “home”? Already, we have 100s in the UK, fully trained to kill, and we can’t do anything about them. Why? I bet MI6 had a contract with the ISIS head-choppers. The best outcome will be regime change in KSA and Jordan. Can ISIS be really worse than the current head-choppers? It would be a good idea then to freeze all those Saudi billions stashed abroad.

None of them will return home. All are trapped in pockets and all will be annihilated.

It is rumored that both UK and France have special forces hunting for their nationals within IS areas and making sure they do not return.

Seriously – UK and French SOF operatives illegally operating inside Syria are not there for that reason – they have been deployed there for years with specific intent to tactically alter the balance in favor of SDF/FSA against the Syrian state forces.

Not that I don’t mind, but it’s bizarre that as long as they’re in Syria or Iraq they can be killed without prejudice, but as soon as they make it back to their country of origin they’re suddenly untouchable. Why is it wrong to apply the death penalty, even with due process in France and the UK, but perfectly fine to apply the death penalty, without due process in Syria or Iraq?

Again, not that I don’t mind, one shot to the back of their heads is too much mercy for ISIS scum, but on the other hand it doesn’t make sense.

That is politics for you. Not always making sense.

I hope they do not get hurt or hunted down. They must return safely to Amsterdam to give the public some taste of reality. If average dutch nationals support their average dutch politicians and European business as usual, it is only fair they get some taste of their own medicine…..

I think we are seeing a change in the whole of the ME – Turkey knows it, Qatar has learnt it the hard way…. all smoke and mirrors, as you infer Saudi are on the ropes / crossroad.

Very strange You cant see any of that.

According to ORB International (the best and objective poll we’ve got) about 10% of all Syrians lean to fanatic jihadism and support ISIS. Assuming those are more likely to take up their arms, they have quite a force.

Why do those 10% support ISIS? Don’t they realize that these groups are destroying their country? I am sure ISIS murdered some of their family members too. Or are they on CIA payroll? They all are traitors! They betrayed their people, their culture, their nationalistic values, etc The other 90% are true SYRIANS! (Btw I just saw on twitter that Syrian army captured dozens of Syrians who invented false flag attacks and sold their country to Western invaders) Glory to SAA!

Like Egypt, the Syrian secular republic has had long standing problems with minority of aggressive militant Islamists – based around the fundamentalist Muslim Brotherhood faction. Nasser nearly destroyed the original Egyptian MB organization in late 50’s but (anti-Nasser) CIA saved their leadership and spirited them to safe refuge in Saudi Arabia – where they later equally fell into conflict with ruling al-Saud clan. In early 80’s Al-Assad snr in turn acted against the Syrian branch of Muslim Brotherhood – in full campaign that decimated the MB base of operations in Hama. The Russian MoD has estimates for militants fighters in Syria – apart from high numbers of foreign nationals – the armed active campaigning fighters are not as high percentage of Syrian population as might assume from the western media’s narrative of a ‘revolution.’ But, for example, several thousand fighters occupying and entrenched in an urban pocket (say east Ghouta) and supplied by third parties with serious munitions can remain a problem for years and massively impact the normal functioning of majority population.

It is always very messy and costly business for any infantry to storm an entrenched urban area – and SAA particularly has limited and widely dispersed manpower. There are 1.8 billion Muslims in the world – and 57 Muslim majority countries – the fact that a minority are open to radical ideas – that is always a numbers issue.

With many IS fighters recruited abroad and facilitated by Turkey to enter IS, by recruiting local followers within both Syria, Iraq, Turkey and Jordan, it was easy for them to build sizable forces. Just from Tunisia there are some 8 to 9k that went to IS. Of course, many were killed, some returned but stll many remain within IS areas.

Every provincial football club can gather more affiliates at the weekend, so some 5 thousand fanatics is not actually much. It´s in fact a fairly small number. What is disturbing, however, is the amount of damage these few hundred fanatics have caused with very light weapons. This means that nowadays in the age of “modern warfare” basically any jackass can gather some friends with similar ideas, find an international sponsor and take over a few provinces in his respective country. It seems, as ridiculous as it sounds, that a few hundred fighters is indeed enough to take cities inhabited by millions of peoples with ease.

no of course not, they are mostly foreign, saudi, israeli, etc

‘Opposition fighters’ are almost all foreign fightere. They come from or they Jordan, Qatar and Saudi Arabia. They are also supported directly and indirectly by the US and the EU.

I supose that Dillon knows the numbers by having a roll call. One usually does this with military personnel and ISIS is the proxy army of the US..

Estimates are like that – the best You can get by the information You can get.

ISIS was only a proxy army for a short while and were also supported by others. Tired of listening to Your kind of babling about it as if ISIS was americans although they are almost all muslims from muslim countries.

Islam the religion of lying excuses when they are worst and cheepest.

You must be the only one to believe that. The rest know that the US is ISIS and all the other terrorist groups combined. If you are tired then go back to sleep, looks like you have overslept anyway.

Just from Tunisia there were some 8 to 9k IS jihadists. Many too from Jordan, Turkey, Russia (chechens) and locals from places like Raqqah, Tel Afar, Hawija etc. All well known and well documented. Also several thousand from all over Europe.

Many are from all over UAE, Albania , Libya , Sudan Chechen, Uzbeks, Afghan, Tajiks , Pakistan,Ughiurs ,Indonesia, US,UK,EU, Canada, Australia, the most of them are Salafists from Saudi Arabia with a small percentage locals.

No make it three!

Dude, why are you commenting on SF? Go back to reading Jerusalem Post!

This actually sounds plausible. The Intel likely came from the Kurdish forces on the ground.

Leaving behind 2,000 fighters to fight to the death is ISIS’s modus operandi. The number 20,000 makes them less powerful than the Sunni militias in Northern Syria which has between 50,000 – 70,000 fighters. Ever since the SDF / SAA linked up at Manbij, ISIS was cut off from being able to get new foreign fighters and has been bleeding to death.

Some two months ago estimated some 3k IS in Raqqah. Guess some 1.000 were killed in those two months. Indeed, plausible.

Looking at this US officer , he looks like the US stereotype of a street thug in a fancy uniform. All balls and bullshit.

Well, better a ballsy thug in uniform then a ballless pansy.

Neither are much use as an commissioned officer.

Depends. Even a thug can be intelligent.

Thugs always lack the ability to Win the Peace and that is more important than winning the battles as without winning the peace there is no pint in winning a battle. Libya being a recent example.

Stalin being another? Mao?

Kudos to Col. R. Dillon and his commanders that let him speak. Straight forward talk with the carrot analogy. After watching the US actions fro afar, I know that the ‘stick’ is brutal, but I doubt that the Shuhada al-Qaryatayn Brigade is going to give anything back willfully with out ‘the hammer’ coming down..

‘According to Col. Dillon, a majority of the ISIS manpower (between 5,000 and 10,000 fighters) is now in the middle Euphrates Valley area running from Deir Ezzour to the Iraq-Syria border region.’ Could this be US signalling it is considering sending more forces to try and occupy the Syrian-Iraqi border?

The US has left it too late to secure the Syrian-Iraq border. The Al-Tanf fiasco shows that. The US won’t commit its own troops and it “vetted Syrian opposition” on the border is falling apart. The US might support a drive by the SDF to secure more of the eastern (or is it the northern?) bank of the Euphrates. This could include the non-SAA side of Deir Ezzor where the river divides it. The SDF would need to move quickly though. With Raqqa fighting still ongoing that seems very unlikely. The SAA has the clear advantage.

Only 2000?Battle hardened and willing to fight to the death.With defences set up tunnels n such and knowing the terrain.With no where to go and noting to lose.Im going to guess September 14 for SDF control over raqqa.Southfront should do over unders for battle progress.War is not a game but dam is it fascinating.Al Burkina or whatever that town is on the Iraq border will be Isis last stand I think