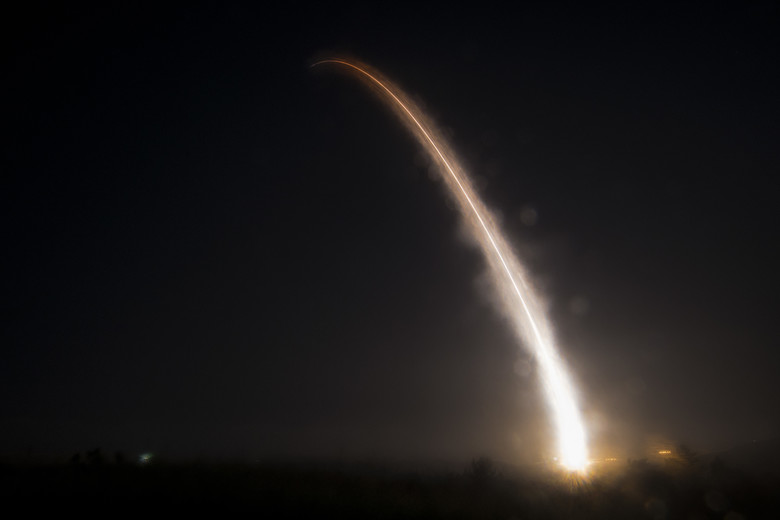 An unarmed Minuteman III ICBM launches during a test at Vandenberg Air Force Base in 2019,

A recent analysis by Defense One notes that the announcement by the US Air Force that it will award Northrop Grumman $13.3 billion to develop a new intercontinental ballistic missile raises more questions than it answers. First and foremost: what’s the rush? The move greatly complicates the ability of the next administration to revise the Pentagon’s $2 trillion nuclear modernization plan in light of other demands both within and beyond the military budget.

The author of the report argues that it appears that strategic concerns aren’t the only drivers of the new program, known formally as the Ground-Based Strategic Deterrent, or GBSD. The establishment of the nuclear triad of sea- and land-based strategic missiles and long-range nuclear bombers had a lot to do with inter-service rivalry within the US armed forces and the competition for funding, rather than being based on a careful calculation of how best to protect the United States from nuclear attack.

The financial and bureaucratic imperatives that gave us the ICBM continue to this day, as evidenced by the highly effective self-promotion campaigns of contractors such as Northrop Grumman and Aerojet, joined in many cases by the Senate ICBM Coalition, a group of senators from states that host ICBM bases or are involved in major development programs for the missiles.

Acting together, this coalition of special interest lobby groups has defeated most efforts to consider the costs and consequences of building new ICBMs, including a proposed amendment to this year’s National Defense Authorization Act, sponsored by Representative Ro Khanna (a member of the Democrats from California), that would have cut $1 billion from the GBSD program and applied the funding to addressing the COVID-19 crisis.

The clout of the ICBM lobby is underpinned by the fact that contractors involved with the program have given $4.1 million to key members of Congress since 2012, and that together Northrop Grumman and its major subcontractors, including Bechtel, Lockheed Martin, and General Dynamics, employ over 500 lobbyists, nearly one for every member of Congress. While obviously not all of these lobbyists work on the ICBM issue, the number of people permanently employed by these companies to promote their interests on Capitol Hill reflects the extent of their political power.

The process through which the new ICBM development contract was awarded raises additional questions. In the lead up to the Pentagon awarding the ICBM development contract, there were two competitors, Boeing and Northrop Grumman. But in June 2019, Boeing pulled out, claiming that the terms of the contract were unfairly tilted in favour of Northrop Grumman. A key complaint was Northrop Grumman’s acquisition of Orbital ATK, the main US producer of solid rocket motors used in ICBMs. Before the acquisition, Orbital ATK had been part of the Boeing team that was bidding to develop the new missile.

Another problem posed by the sole-source award of the ICBM development contract is that the already astronomical costs of the program could rise still further because of the Pentagon’s limited bargaining power in negotiating the contract. The problem could be exacerbated if Northrop Grumman’s missile fails to perform as advertised.

At a minimum, Congress needs to investigate the terms of the contract in detail to make sure the company is held accountable for efficiently spending the billions it is receiving to develop the new system. More importantly, Congress and the next administration should reconsider whether a new ICBM is needed at all.

Former Defense Secretary William Perry hit the nail on the head when he said, “The highest probability of starting a nuclear war is a mistaken launch caused by a false alarm and a rushed decision to launch nuclear-armed ICBMs. Instead of spending billions of dollars on new nuclear missiles we don’t need, we must focus on preventing accidental nuclear war.”

Consistent with this perspective, a June 2020 report by the Union of Concerned Scientists argued that rather than building a new ICBM at an estimated cost of $85 billion to $150 billion, the current generation of ICBMs should be taken off hair-trigger alert and refurbished, as the first of a series of steps towards eliminating land-based nuclear missiles altogether.

I am baffled and confused. Tommy J. himself has already assured us that Pentagram is well ahead of unprofessional and bragging Russians in the development of hyper-sonics.

Haha. Maybee maybee not. There are many kinds of hypersonics…

I read it as the Congress has to choose and there are several solutions and even none.

The big picture might be new ballistics makes a lot of jobs and after that none and the big investmenets for it.

We see that for airplanes by boing and others too. A mistake and then they almost are bankrupt (the 737X is a good example).

By that it makes sense to make the smaller ones and easier continue in semilar products which fx can be more advanced cruiser missiles and like that.

Thats my reflexions about it,

My Goverment fx has ordered a lot of expensive F35. Sure they are good airplanes. But we dont get them tomorrow and we hoåpefully also dont need them tomorrow. They do replace our F16s well.

But if itt was me deciding we have ordered much less of them and a bunch og big drones. After 10 years we could see our needs for the next 10 years better and fx order more F35s or more advanced drones or even more and better anto-missiles.

I think the biggest problem for USA is the knock out effect for the big companies. They seemes to have another one too, and thats quality. It make no sense to make junk even its new junk. America should be known for first class high tech instead of minimum quality or lower.

If its a real question we have shallow water and modern teqniqe can find subs much better today. So we didnt replace them.

We instead upgrade other things to guard Our part of the Baltic sea.

And we decide whats important. We do upgrade our military forces a little. We have ordered some more big missiles and bunches of small ones.

For the infantery we have ordered many armered transporters with canons on in the bradly or stryker style. We now again are Our own defence unit in Leopold Tanks – the second bestt ones only. Its a change because before now we should assist the germans in northern germans by a supplement to them.

The rest is replacements and mainly F35 instead of F16s and older F16s.

In the plans we have to make as figting brigade we can send anywhere in the world as a part of the military forces. That verymobile unit should be 4.000. A help for that is we have taken over 2 Hercules which both are mocernized.

So we cant always cut down but has to move around activity in a relative high level. For the moment we has to have more money for new hospitals. They are building them right now, but they are more expensive then we thougt. Our regional hospital need about 40 mio dollar extra and they think about 10 million more might do it.

So we have to learn to order less then we wish for or move money around. A good thing for the moment is that we only get very few refugees as incommers. Last year all of them gave 3 billion. dollars in minus. We kind of see it for 2020 only will be 2,7 mop dollars.

But some morons has ordered a very expensive bridge to germany. People love to spend money and hate the opposit.

My own budget is fine. I can even effort to became fat if I want to. Ate You finances ok?

How many F35 you ordered? Btw Denmark can make own drones, if Turkey, Iran, India made theirs.

Too lil too late ?

US is a dead broke which with India shares the worst Covid statistics and still keeps on spending billions on worthless weapons. It is truly baffling at the mediocrity of US mindset.

Watch it to be over price and worthless like the others shit they made.

For gunmakers amerika is heaven, they take the money upfront and have no obligation to return working products, then to barely make it work, they will get another pile of dollars and once again they don’t have to provide guarantees, doesn’t exist nor has there ever been a safer way to make money effortlessly.