On March 5, the Pentagon announced that Turkey’s Operation Olive Branch against the Kurdish People’s Protection Units (YPG) in the area of Afrin had led to an “operational pause” in US-led efforts against ISIS in eastern Syria.

Pentagon spokesman Colonel Robert Manning added that the operational pause had not affected US strikes on ISIS and the so-called Syrian Democratic Forces still control territory it had seized.

“Some fighters operating within the SDF have decided to leave operations in the middle Euphrates river valley to fight elsewhere, possibly in Afrin.”

Thus, Washington at least admitted that the YPG was the main if not only ground striking force of the SDF. Various US officials had repeatedly claimed that the SDF consisted of some mysterious Arab-dominated forces with some YPG presence.

On the other hand, the US will be able to justify their further military presence in eastern Syria with “we are fighting ISIS” mantra now as long as its operation is on “pause”.

On March 5 and March 6, the Turkish Armed Forces and the Free Syrian Army advanced further in Afrin and captured the villages of Qurayriyah, Qatirah, Karakih and entered the Sharan district center. Clashes are ongoing.

an “operational pause” in US-led efforts against ISIS in eastern Syria.
This is so much BS

Wars and deaths based on lies.

Anyone believes ISIS still exist there in North Eastern Syria?
They change uniforms like Chameleons.

OK, so the Kurds are heading off to defend Afrin. The Yanks are therefore allowing their NATO ally, Turkey, to be attacked by the terrorists that Turkey are trying to neutralise. I have no doubt that the Turks have the capacity to do what they set out to do, ie., defeat the YPG. So, where is that going to leave the Yanks? It leaves them with 2 options, either get the fuck out or to reinforce their 3,000 jarheads. Already beginning to look like a mini Afghanistan. Going to get very messy ’cause these fascist scum are intent on staying and they don’t give a fuck about anything except to smash up Syria. We now need the American people to start demonstrating in their own country against Yankee involvement is a sovereign country without any mandate from the UN.

Turkey and the FSA headchoppers are terrorists as well, arguably worse than the YPG. Ideally, Assad will retake every inch of Syria.

too many people on this site have a black and white bimodal view of this conflict. Just because Turkey/FSA dont like YPG doesnt automatically make Turkey the “good guys”. Just because some FSA fought ISIS doesnt make FSA the good guys. Just because the YPG fought against FSA or ISIS doesnt mean YPG now has legitimate claim to partition Syria or occupy historically Arab majority lands in the Euphrates valley.

I don’t understand how some morons cheer on FSA headchoppers and Turkey in Afrin. Turkey was and still remains the main gateway for headchoppers and jihadists to enter into Syria, and continues to insist that Assad is a “terrorist” and pushes for his removal. Just because the US and Turkey are at odds with one another does not mean Turkey in any way has Syria’s or Assad’s interests at heart.

I suspect months from now, after the turks kick the kurds out of areas such as Afrin, the “predictions” that some erroneous morons on this forum made that Turkish backed headchoppers will simply “hand over” territory to the SAA will be demonstrated to be completely false.

Turkey has established numerous bases and “observation posts” in northern Idlib and the area of the euphrates shield, and will likely establish more in the Afrin area. If and when the Kurds are pushed back and/or forced to comprehensively negotiate with the SAA, I HIGHLY doubt Turkey will magically turn its back on the headchoppers it is supporting right now, and magically relinquish Syrian territory to the Assad government.

The YPG may be a spoiler and untrustworthy for Assad, but at the very least they are not dedicated to overthrowing the Assad regime, and most are not even seeking independence, but rather greater autonomy. The FSA headchoppers supported by Turkey on the other hand to this very day refuse to negotiate an end to the war, and to this very day insist on Assad’s departure.

I fully support Assad and the legitimate government of Syria, but if I had to choose sides between YPG or turkish/FSA headchoppers, I would side with the YPG.

Well put, I agree there do seem to be some people here who don’t seem to think pragmatically.

They think that because Russia is supporting Assad that therefore Turkey + headchoppers inc. will simply “withdraw” after they take care of the “PKK” or w/e.

Um, no. What’s going to happen is Turkey + headchoppers are simply going to acquire a bigger chunk of territory and continue their war on Assad

Unless the Russians are willing to attack Turkish bases in currently FSA controlled territory (which I highly doubt), whats going to ultimately happen is a decades long ceasefire kind of like in north korea, resulting effectively a partition of Syria, with turkish headchoppers in control of Idlib, parts of Aleppo province, Afrin, and the euphrates shield area plus maybe Manbij.

At least with the kurds, in the long term, I foresee a potential negotiated resolution. What kind of a fucking moron actually thinks turkish backed headchoppers like al Zenki are going to negotiate with assad?

Check this out you idiot.
https://www.hrw.org/report/2014/06/19/under-kurdish-rule/abuses-pyd-run-enclaves-syria

how does any of that make me an “idiot” you fucking dipshit? ARe you implying that i am not aware of the abuses committed by the PYD against captured prisoners, arbitrary arrests and excessive force against protesters under areas of its control?

I never fucking denied any of that, you dumb braindead turkish piece of shit.

What I am saying is that the headchopper groups currently supported by your fascist president Erdogan are a lot worse.

Every single side of this war has committed atrocities and human rights abuses, that is the nature of war in general. But by far the most egregious examples of this has been at the hands of ISIS (supported and/or willfully ignored by the turks for years *see map below*

or by the headchopping jihadists like al Zenki, ahrar al sham and al nusra.

Your headchopping muslim brotherhood FSA stooges are the only reason this conflict ever started and got out of control the way it did. Your shitbag Turkish regime providing unfettered cross border access of foreign fighters and weapons is the only reason the so called “rebels” managed to make any gains at all prior to 2015.

Its funny how the turks only started worrying about “terrorism” and intervening only after the Kurds started beating back ISIS in much of northern Syria and cross the euphrates into manbij. 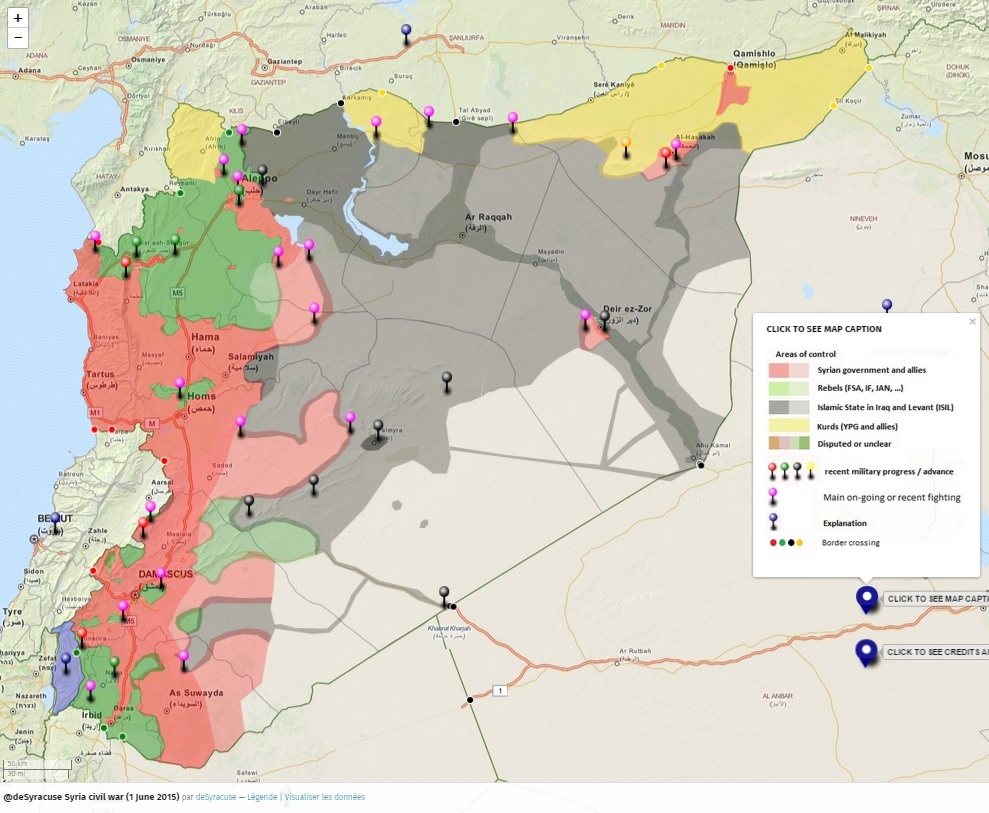 So first you’re sitting on your dumbass throughout 2015 and 2016 with ISIS RIGHT on your fucking border, scores of jihadists pouring in to try and overthrow Assad, jihadists chopping off heads, burning people alive in cages and you don’t say a fucking peep. but once the kurds get a handle of the situation “SUDDENLY” turkey is mr good guy and starts euphrates shield? (again, I’m not saying the kurds are angels, but I think its safe to say any reasonable person would prefer to live in Manbij under the kurds as opposed to ISIS). Again, give me a fucking break. Erdogan is a piece of shit and a fascist who is going on a power trip and attempting to destabilize and partition Syria for his Neo-Ottoman ambitions.

Your side is the side of the headchoppers, you dumb Turkish idiot.

Just laughing. There is not one FSA and the ones fighting along with Turkey are not the ones you mention to be headchoppers. So you accept that PYD/YPG guys are not angels and have committed lots of human rights viaolations in the areas they control which they also claim that historically been Kurdish. Which means that they are commiting crimes against their own people. If you really want to understand what happens in a region when Turkish army enters, just look at the Euphyrates Shield Region.

I would think that Erdogan will be less than impressed when the shiny new vehicles and weapons donated by the USA to the Kurds start to appear in Afrin :)

They have no true goals! It is such a mess what they have done! arm bad guy terrorists,arm good guy terrorists, arm good guy SDF yet at the same time pretend to fight the bad guys. But their good guy SDF are now fighting against their long time important ally Turkey! Also the US is in syria illegally! They have bombed Russian PMC’s, they and fought along side and supported the PMU in Iraq but are against Hezbollah and Iran whom are supporting and allied with the Iraqi PMU! They have funded both sides of a war when the FSA battle against the SDF and have merged bad guys terrorists HTS with FSA and said its OK!
hey have ZERO idea what they are doing! Im sure they THINK they know but tell me how easy do u think it is to mess this plan up! Just takes a small incident to occur and the plan all goes to shit!
I already know Russia will make the Americans look bad, humiliated and also to blame! This will anger the Americans who will do something stupid to which Russia may have to react to!
Like Putin said, the Americans are geopolitically unprofessional! Using terrorists as a proxy is just going to back fire and it already is!

The USA strikes never was effective opposite ISIS.ISIS are children of juesej !

Civilians at least get a reprieve, gives them time to bury their dead caused by US air strikes.

Hmm, seems like the are trying to resurrect isis there.

The Turks have made it clear that they’re not going to allow KRG part 2 in SDF areas. So I’m sure that they’re talking with the Syrian government coalition about opening a second front against the Kurds to shut down the Jew world order’s Israelistan project east of the river. Which is going to make the US occupation and the Mossad’s Kurdish marionettes position even more untenable than it already is. 90% of the land east of the river has non Kurdish majorities, and a lot of them are unhappy with the Jew directed Kurdish ethnic cleansing and Kurdish military and political domination.

YPG/YPJ is the cutting edge of total SDF forces, both in numbers as in experience and fighting spirit. Tribal forces of Raqqah and DeZ are the weakest of SDF in those resepects.

Arab forces of MMC, Saanadid are reliable allies with good performance but not located in DeZ countryside YPG/YPJ are redeploying for some part to Afrin, but most will be redeployed along the Turkish borders and Manbij.

US can only blame their own decisions and Turkey for YPG/YPJ redeployments.

The Syrian government coalition is running ops east of the river in multiple places, and so are Turkish spec ops. You can kiss Israelistan goodbye. Jew world order plan A regime change is history, and plan B partition is heading down the tubes.

If that shit, what i see in afrin is cutting edge, the you are really only commie gypsies.

Namecalling does not hide your sub par low intelligence, or your racist nature.

Hardly ever read such stupid BS.

US/SDF could probably continue to press ISIS, but defeating ISIS east of the Euphrates would remove the pretense for remaining on Syrian ground.