Just when a few hours had passed without any escalation around the Korean Peninsula, The Guardian reports that the US military is considering shooting down North Korean missile tests as a show of strength to Pyongyang according to two sources briefed on the plans.

As the USS Carl Vinson heads towards the peninsula, along with two oither carriers, the Pentagon is looking for ways short of war to pressure North Korea into denuclearization, particularly if Pyongyang goes forward with an anticipated sixth nuclear test.

The option, which defense secretary James Mattis has briefed to Congress, has, as The Guardian reports, yet to mature into a decision by the military to intercept a tested missile. One US official said the prospective shoot-down strategy would be aimed at occurring after a nuclear test, with the objective being to signal Pyongyang that the US can impose military consequences for a transgression Donald Trump has said is unacceptable. But experts and former officials said shooting down a North Korean missile during a test risks an escalation that Washington may not be able to control, one that risks war on the Korean peninsula and potentially devastating consequences to allies South Korea and Japan.

“I would see such an action as escalatory, but I couldn’t guess how Kim Jong-un would interpret it,” said Abraham Denmark, the senior Pentagon policy official for Asia in Barack Obama’s administration.

“But I would be concerned he would feel the need to react strongly, as he would not want to appear weak.”

Both sources said the military was not looking to use the high-profile missile-defense system the US is providing to South Korea, the Terminal High Altitude Area Defense (Thaad). Thaad’s 200km range and sophisticated radar have unnerved China, whose president, Xi Jinping, has been coaxed by Trump into pressuring North Korea.

In the past, several US administrations have considered shooting down North Korean missile tests, only to turn away from the option when considering the consequences of escalation against an unpredictable and bellicose adversary. Rumors have circulated since Trump took office that he has been mulling a shoot-down. A US official said the military was discussing a potential shoot-down ahead of Trump’s meeting with Xi on 6 April at Trump’s Mar-a-Lago resort in Florida. The discussion also preceded Friday’s North Korean military parade, during which Pyongyang displayed advancements in its intercontinental ballistic missile program and anti-ship missiles, as well as a test-launch failure on Saturday. Senior Pentagon officials pondering the shoot-down option are said to have conceded they are unsure how North Korea would respond, especially considering North Korea’s comments…

“If the U.S. is reckless enough to use military means, from that very day, there will be all out war. Our nuclear weapons protect us from that threat,” Vice Foreign Minister Han Song-Ryol told the BBC’s John Sudworth. “We’ll be conducting more missile tests on a weekly, monthly and yearly basis,” he threatened. He said that an “all-out war” would result if the US took military action.

Neither Pentagon nor US Pacific Command representatives responded to a request for comment. Another factor complicating a shoot-down would be the risk of embarrassment should Aegis interceptors miss a North Korean target, which might embolden Pyongyang and unnerve US regional allies.

Ken Gause, director of the international-affairs group at the CNA thinktank influential with the Pentagon, said US planners have grown frustrated with coercive diplomacy amid North Korea’s maturing nuclear and missile capability. But Gause said that while Washington might spin a shoot-down as a step below an attack on North Korea or an attempt to overthrow its government, it risked validating Kim’s position that North Korea needs nuclear weapons and long-range missiles to respond to American aggression.

“I still see this as escalatory and playing with potential fire. At the end of the day, Kim Jong-un cannot be seen internally as backing down from pressure”, Gause said.

It seems odd that the US would telegraph this intent – given Trump’s campaign discussions of not doing exactly this. Or is this simply a way of showing that the Pentagon remains on a war footing despite a very temporary lull in global thermonuclear ware rhetoric.

There is a big risk for the US doing this. What happens if the US missile misses :)

Laughter all round I suspect.

I have read that trumps main adviser now, Jared kushner, is a part of this organization called Chabad that hopes to bring about a WW3 to fulfill some kind of sick Jewish prophecy. He’s a huge Zionist/neo con and most likely has blackmailed trump into doing his bidding. Thats probably why he has went back on so many of his campaign promises :(

I agree with you. Trump has either been blackmailed or bribed in some way. The Jewish ‘ 6 million prophecy ‘ has not happened yet. There are 6 million Jewish people in Israel now. They should be careful what they wish for.

definitely. kushner or someone else probably found some dirt on him. the question now is, what will he do? try and find a way out of it? give us subtle hints that he is under duress? or simply submit to them? im hoping not the latter!!

Kushner is Trump’s son in law. Trump is keeping it in the family, his recent flip flops can be attributed to the fact that he has to work with Democrats in order to implement his agenda; The Republican conservative wing has a mind and a will of its own agenda, without any chance for compromise.
The fact Gary Cohn, a democrat and Wall Streeter is becoming more influential within Trump’s circle is a sign of the shift.

Guardian is a trash yellow journalism rag. Full of s h i t and lies. wouldn’t trust the source as f a k e MSM BS rhetoric is its bread and butter.

Trump likes to think himself ans an ultra-clever negotiator-trickster master of the deal, but the more I watch what he does – over and over again – I have to conclude that he’s really a simple-minded con man surrounded by people that fawn over his awkward ‘skills’ and juvenile deceptions.

He’s a classic psychopath. He’s probably good at making deals with other psychopaths when there’s some mutual benefit to be had by both parties. But when Trump imagines himself in a position of superiority, he acts like a typical psychopathic bully and delights at domineering over the weaker party. Thus, I believe he will deal with Kim Jong-un just like a bully treats a weak, little kid. Trump will wheel-and-deal with China and South Korea.

Problem with Trump’s bully strategy should be obvious to the world: If North Korea has any substantial nuclear capability, then Kim Jong-un will react like the psychopath he is and retaliate with the weapons he had developed for that purpose. No way in hell does the US know the extent of their nuke program or where all those weapons are. A pre-emptive strike is useless because Kim will continue retaliating with whatever he has left as long as he is breathing. His minions will carry on the exact same way. Japan and South Korea will take the brunt of the nukes, but Kim will take out a carrier group or two and make sure some make it to the US, even if they have to row the thing over here in a dinghy.

Trump doesn’t consider the risk of brinkmanship here because he figures Kim will cower and fold at the might of the US (and China, whatever they threaten to do). Trump will Tomahawk missile sites and radar installations in North Korea, and he will then be genuinely surprised when Kim nukes one of our carrier groups. Trump will then escalate because that’s all he got. He will win a war that never should have been started and blame the deaths on Kim, not himself. 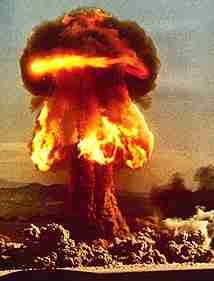