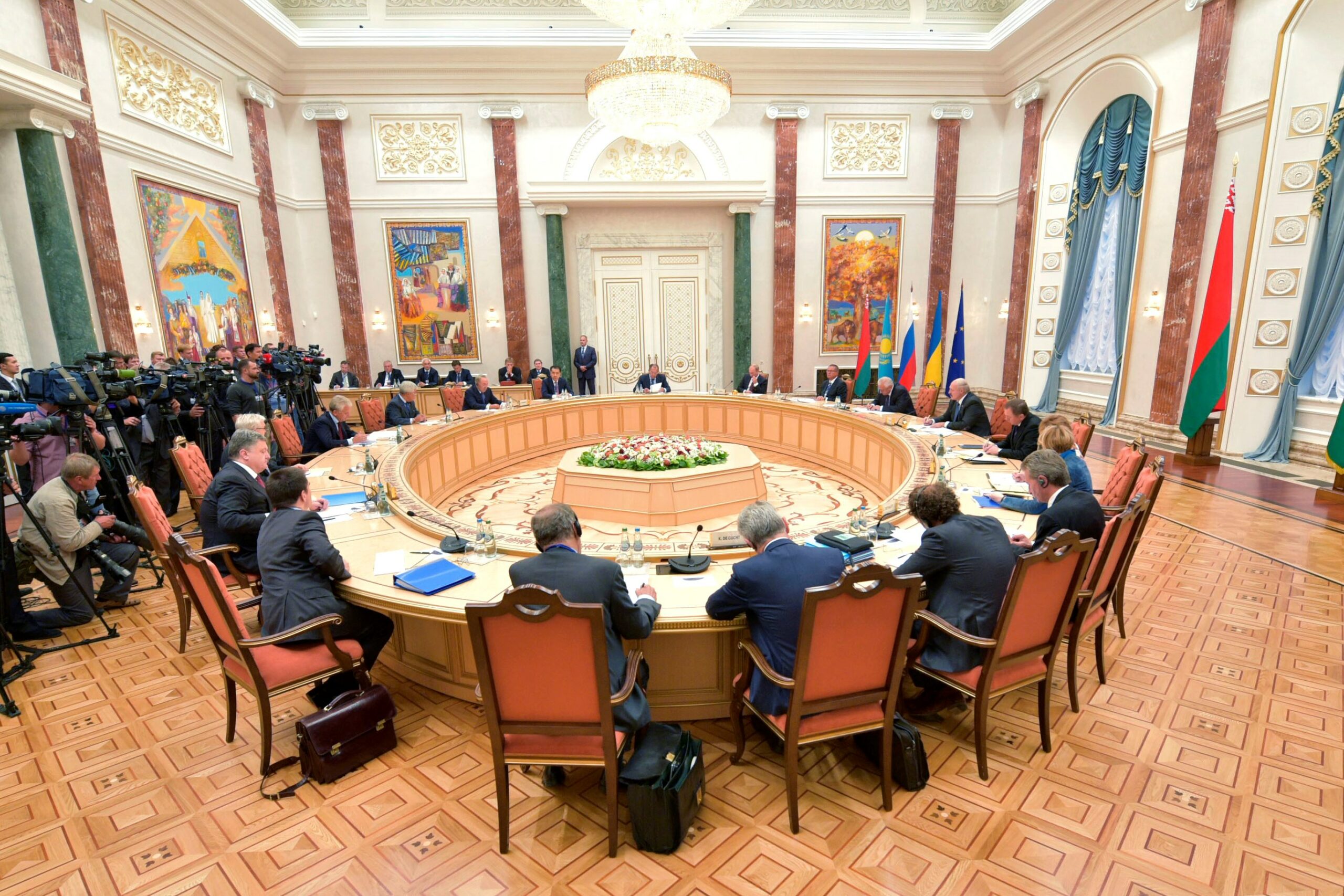 On April 28, a regular meeting of the Trilateral Contact Group (TCG) on the settlement of the conflict in Donbass took place via videoconference. Ukraine, Russia, and the OSCE has failed to reach an agreement on the final  text of a ceasefire agreement ahead the Orthodox Easter.

“After almost five hours of useless discussion between Kiev and representatives of the republics, no practical result has been achieved,” the LPR said in a Telegram message.

According to the representative of the Ukrainian delegation in the TCG, Oleksiy Arestovich, the parties failed to agree on the text of the document on the introduction of the “Easter truce”.

“All parties agreed on the need to establish an Easter truce. Two texts of the document were proposed – Ukrainian and Russian. But we have not yet managed to agree on the final text, because there are sensitive formulations, ” he claimed.

Kiev blamed Russia and DPR/LPR, while the representative of the Russian side Boris Gryzlov accused Kiev of blocking the negotiation process.

“Instead of discussing issues, everything was aimed at building tangled ” legal structures ” with the aim of not recognizing Donbass as a party to the conflict.” – he said. 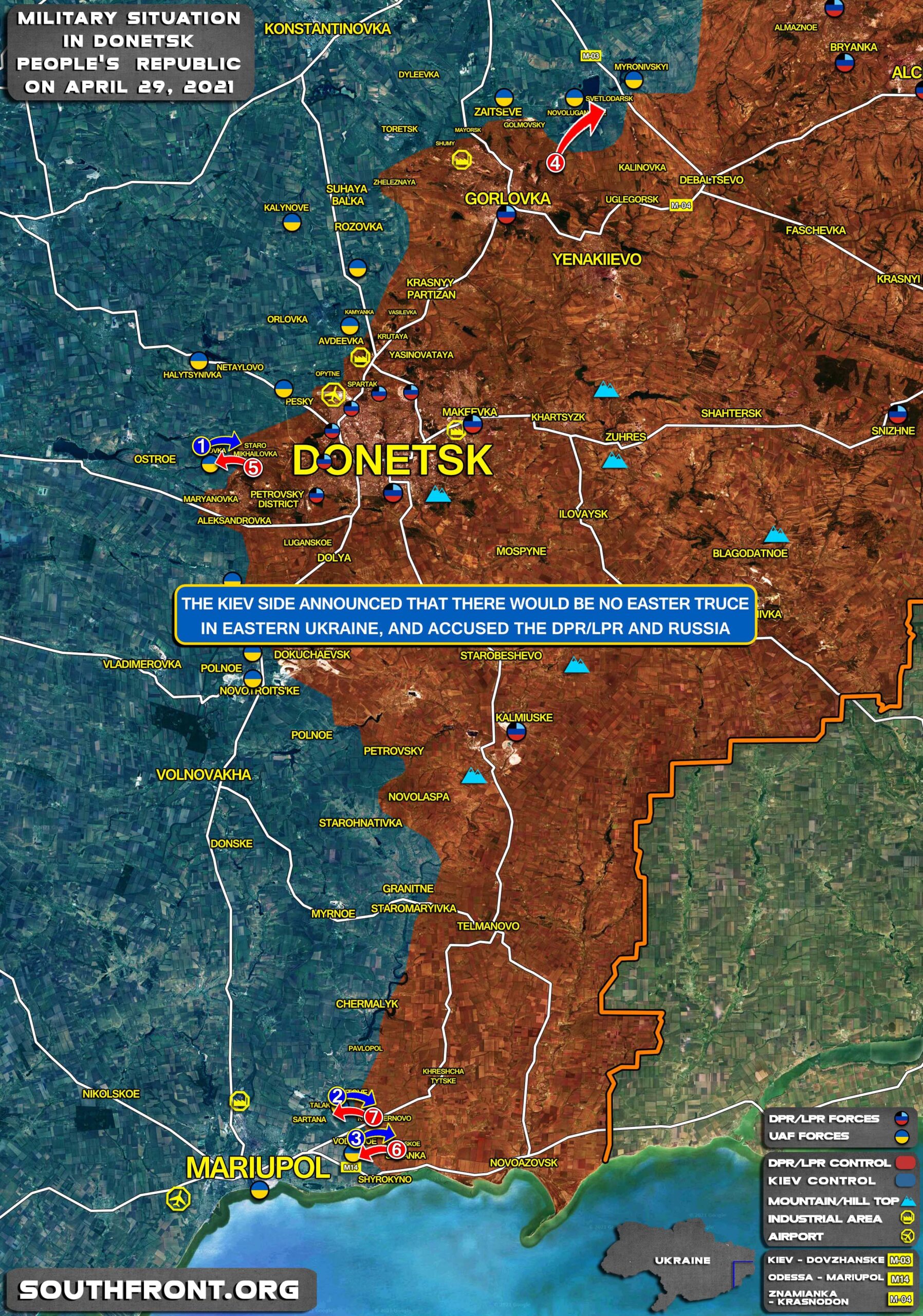 – The Kiev side announced that there would be no Easter Truce in Eastern Ukraine, and accused the DPR/LPR and Russia.

They don’t want peace, not even the truce, do not respect the law, when they will be ready to pay will not be able to invoke no law, they will be punished with maximum pain, without any pity.

“Sukhoi Su-57 PAK FA: *Izdeliye 30 engine” also known as “2nd stage engine”, a 5th generation engine due to be next year in serial production for all SU-57 jets. https://www.youtube.com/watch?v=V_OcDZBe82o&t=21s

Not willing to give Donbass any autonomy, or even peace through frozen conflict, Ukraine is starting “all or nothing” game. There is huge probability that they will end up with one huge nothing.

True! Like famous “Maidan” flavor ones. Those Victoria Nuland favorites. She keeps them in freezer for the special occasions.

so when will war begin?

You are in hurry for WW3. ?!? Ukraine will not attack now (when they saw 2 Russian armies and 3 paratrooper divisions (100 000 Russian soldiers) on their border in very short period of time). They are hopping that Russia might do that (attack) one day, so that they can scream for NATO help. For the moment they will continue with the low key conflict and they will keep begging the Western NATO countries for more military aid. Maybe US will push them into the attacking Crimea while western media will start in the same time propaganda campaign about “Russian aggression” and need for NATO intervention. In that case we will have WW3….

In my opinion WW3 at a low level started with the 78 day Blitz on Yugoslavia.

Big “rehearsal” for destruction of Russia?! Yes! Very good point. at the time (Ex-SSSR) Russia was still remaining symbol of everything dangerous for U.S. So it had to be destroyed by U.S. as sign of absolute victory. To perpetuate new era of uncontested american global dominance ( for eternity ).

not working out too well for them now hahahahhahaha

Spot on my friend, that is the starting point.

i dont get what the low key conflict and military aid will do for them, its pointless, they know the cant beat russia so they are just wasting their lives hahahahha

Of course it is “pointless” from common sense and military point of view. But still it serves desired purpose. “Low key conflict” just to keep posture of “fighting Russians to defend Europe”. To appease local ultra nationalists on one hand and on the other… they can keep begging for more military aid…Free stuff of any kind from all NATO countries… From anybody willing to give them anything.

not even ukie nazis –fake cowards like bacon blyat, Jens, tommy etc will risk war in donbas—the rotting anglos in wokestan are reduced to BLM ghettos and LGBT conversion therapy ukie hillbillies have reduced themselves to an amerikan colony,.. when the decayed empire crumbles in the next few years ukunwokestan will request to be colony of Moldova

Why on earth is this debate so packed with propaganda that any reasonable debate is dead on arrival.

Never forget what the Sovjets did to Ukraina, decades of terror regimes, and famines whom by large was an by product of Sovjet rule (exporting grains, etc, and confistacted that thru out ukraina while famine was an real threat, etc, etc the name of the game is one man, Kaganovich, do you even know what I talk about, do you, I dont thinks so), and nobody wants to debate that, other then drool something about an pack of what, 100 so called nazis whom by large is backed by Jews, because the coup was instigated by the western ZATO forces, and the Ukrainians was squiced into this spectacle, and they are the ones loosing this because they deside nothing while outside forces, you know whom, is guiding the poltics, and the only focus scumsites like Faker and MoA have if hooned into the pack of idiots, whom by large is an product of Sovjet occupation and regime, witch nobody wants to debate, yeah, I have to be an Nazi just for bringing this up this days, where Britsh, German and UssAs various units have invaded the so called Alternative sites where they pimp flatout lies about everything incl WW2.

I would go so far that state, that nobody in their right mind in Ukraina should ever trust the Russians, never, never, never ever trust the Russian Gov, because of their lies and propaganda, witch is pimped by in the west and the truth, Stalin was an Saint, and did nothing wrong, and if anything happened it was an accident, and not their fault at all, and the number game, incl 6 trillions gassed witch there isnt an single mass grave to confrim anything, incl the millions killed in Ukraina by the Nazis witch again rests sollely on western aka British/UssA propaganda whom was against the Germans even decades before WW1, there is so much lies in this that to even claim that alone makes people go balistic, the same whom whines about the Emotional terror the fake left pimps this days, the same people screams of you say anything that contradicts the Russian propaganda about the Great patriotic war, whom kiled most Russians in WW2, Stalin or Hitler, huh, I bet you dont know or dont want to debate that, because of Saint Stalin was an hero. I will give you hurrah patriots and pets an hint, scorched earth and confistactions of live stocks by the Red Army etc, and that was done right before some years of hard winter, and invasion of the German armys, but the main killed of Russians was them self, I come from an region where everything was burned down, everything. And what made most people survive was the short period, while the Russians endured years, witch everything burned down, and somehow nobody wants to debate that either, but whines about this been western/nazi propaganda, of course, I forgot, Stalin was an saint.

That, serario is what the Ukrainians face this days, over run by everybody else, I dont hold this current Gov in Kive as to be anything else than imposed by the west, corrupted to the core and by llarge Jewish, witch by an miracle is never debated, oh….. I forgot, I must be an Anti-semit. Dont waist your self on an war, because the onces whom is your “friends” dont give an rats ass about your people nor nation, oligracs are oligarcs, they care about them self, all the time. Ukrainians should just forget this regions, let them go to Russia, but start to open your history to what really happened in this decades of Bolsheviks terror regime, because I dont belive much of the propaganda witch are pimped by anyone this days, certanly not even by much of the so called alternative sites.

Ukrainians should kick out the western stooges and ignore the Russians whom you cant trust at all, no more than the western scums, but focus on your own nation and people, because this path is certain to be leading into your doom, and prolong the unnessecery missery where just an few benefits while the rest suffers.

What’s not been settled ? Zelensky was fixing to invaded Donbass ordered by the Jew maggot Biden so Russia did a bit of a response practice run with a build up of troops and equipment close to the border and Navy to Black Sea, – 2 weeks ago, Zelensky caved, didn’t want to lose Kiev too, which would be inevitable.

Anyhow what’s the similarity between recent Armenian conflict and recent non conflict between Ukraine and Donbass ?. – Nikol Pashinyan is pro US but totally dependent on Russian protection and Zelensky is pro US and totally dependent on Russian protection. Actually that’s why Armenia lost so much territory in the recent conflict with Azerbaijan, after all why would Russia make a commitment to a country run by a Jew maggot ?.