Of perhaps minor newsworthy note in the west is the release of Meng Wangzhou. Meng was falsely ‘arrested’ by the US regime for “colluding with Iran” in 2018, via typical delusional paranoid charges, typical of the failing states obsession with Iran and an excuse (at the time) to leverage Trump’s trade war. Ordering the arrest of Meng via its compliant neighbor to the north, that subservient serfdom obediently arrested her. Now, almost three years later, she has been released in exchange for two lowly serfs (as far as the media is concerned) held by China, in what the former United States deemed to be tit-for-tat arrests. While the story may fall flat and deemed worthy of only a New York Times minute and a giant yawn from cheese eaters, the ‘Story of Meng’ is a resounding celebratory success in China, and is heralded all over that nation.

In a way, the story of Meng is in microcosm all that is wrong with the west. In pursuit of its militarist Pax Americana the Meng affair is just one more progression in a crescendo of bitterly bad foreign policy decisions made by US State. It is a Pax Americana an assassinated president warned about, with so many historic failures. From Mossadegh, Lamumba; Bay of Pigs; Vietnam; Iraq; Chile; El Salvador; Syria, Libya… the list goes on and on and on. After so many failures, the former United States eventually settled on a failed state policy as we have already explored in numerous articles, almost as numerous as the failed states listed.

There are many more examples, some seemingly minor, but they signal a major turning point for the Pax Americana now. For example, the US defeat in Afghanistan was a given from the start because the pax does not belong there. Afghanistan is a place the west will never dominate or control. But regardless of circumstance… defeat is defeat. Likewise, a brutal and despotic US ally – Saudi Arabia – just suffered major defeat in Yemen. Now only one other brutal and despotic US ally – the UAE – must be confronted there. And we see another defeat for the west with Daraa in Syria. Daraa was a victim of the redirection policy described by Seymour Hersh and pioneered by former NSA head Elliott Abrams in 2006. The insurgency in Syria was enabled by collusion of the United States, Israel, and Saudi Arabia. But the US presence in Syria will soon be irrelevant. The US and Israel not only miscalculated with regard to Iran’s and Russia’s support for Syria, but the US is forced to acknowledge that its failed state policy pursued in tandem with Israel cannot succeed and cannot be maintained. Daraa of course is a setback for Israel, which occupies large areas of Syria and defacto parts of Lebanon. Israel’s illegal occupation of Syrian land was a motivating factor for Israel ordering the US to intervene and support terror in Syria, just as the former United States has funded and armed terror in Afghanistan, Libya, Sudan, Haiti, Yemen, Iraq, Syria and elsewhere. 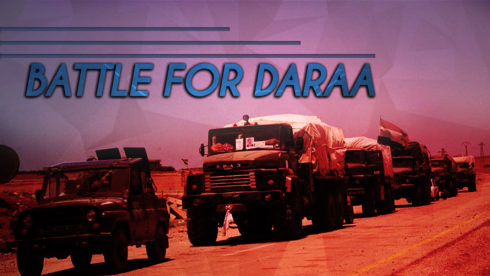 Despite talks of Israeli ‘normalization’ with Arab states, that’s largely a geopolitical irrelevance. Israel has brutally besieged Gaza for fourteen years, just as Saudi Arabia and the UAE have destabilized Yemen for twenty years. Israel’s daily genocide and violation of Palestinian human rights is quite apparent to the globe despite shin bet’s best efforts to suppress the evidence. A case in point, the Gilboa prisoner escape. The foregoing is not a propaganda end, but only to illustrate how geopolitical perceptions are changing. The west has isolated itself by its inability to adhere to the values of democracy that it hypocritically pretends to champion; and by its enthusiasm for war, failed states, and havoc to justify the militarism Pax Americana requires. The hypocrisy and failure of the west is witnessed by all and really only the west itself denies that. Such is empire.

Now we come to the point. The Pax Americana a murdered president warned us about is now attempting to slow the inevitable decline brought about by its own hand, over many decades. So how can the hegemon slow that decline?

Perhaps it’s better to view the Pax Americana in the form of its opposition, being an alliance between Russia, China, Iran, and perhaps a rogue four-headed snake in the mix too – NATO ‘ally’ Turkey, with India as an also-ran. For the failing hegemon that leaves only the alliance France is whining about: US, UK, with outliers Australia, India, and Japan to hold down the Pacific. That’s how it must be.

In the context of the contagion, slowing trade routes, a collapsing global reserve currency, and endangered trade and energy agreements, the Pax Americana has already been forced to ditch Asia and the Middle East with the exception of its unwavering support for Israel. That leaves Europe, Africa, and Latin America as a much smaller sphere of influence for the US hegemon. China has made great strides in parts of Africa too, with growing influence there. Russia’s energy dominance in Europe will likely marginalize or even neutralize US Liquid Natural Gas ambitions in Europe.

By its trade sanctions, weaponization of the US dollar, predilection for war, support for brutal regimes, and cloistered, unrealistic, myopic view of what’s truly a multipolar world, the United States has painted itself into a serious corner. That corner is becoming ever tighter, and ever more uncomfortable. It’s something US State is either too stupid or too arrogant to see… as is the way of all empire. The only thing that really maintains the pax is the US dollar and trillions in share markets. When the dollar and those markets experience true peril, that’s when the Pax Americana will truly fail. And any pivot to contain China, Russia, Iran and the Pacific will not save it.

If the murdered american president in question is JFK it is important to note that a police officer in the area (J.D. Tippit) was shot and killed within the the same hour as the assassination of the president.

It was well known he bore a striking resemblance to the american president. That would give a paid off coroner two bodies to hide the real events that transpired in late 1963.

The petrodollar scam is being eroded by the day as more governments wisely choose to bypass the usd in favour of better conditions for their people. Once the amero/anglo scam falls apart their people will revolt en masse.