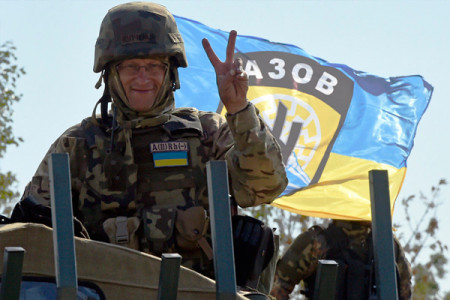 Original by Vladislav Maltsev published by life.ru; translation by J.Hawk

On July 20, 2016 in Kiev, unknown perpetrators blew up a car with Pavel Sheremet, a journalist (we’ll get to where he was going further down in the article). While the investigation is trying to unravel this crime, I propose we remember what the dead journalist was engaged in doing as part of his profession.

Pavel Sheremet became well known 19 years ago, in July 1997, when, being the director of the Belarus bureau of the ORT (at the time controlled by Boris Berezovskiy), he was arrested by Belarusian special services while attempting to cross the border into Belarus from Lithuania. His aim was clear enough: to demonstrate how “open” this border was and thus place into doubt the very wisdom of creating the Russia-Belarus union.

I remember very well how virtually every edition of ORT news made a mention of this “prisoner of the Lukashenko regime.” Sheremet spent about 3 months behind bars and was deported to Russia, where he became a member of the liberal opposition (for example, in 2006, he was one of the co-founders of the “Russian Anti-Fascist Front” with Nikita Belykh and Lyudmila Alekseyeva), but did not earn any particular fame.

In 2014, Sheremet went to Kiev and managed to establish a certain renown, working at the pro-Maidan “Ukrainskaya Pravda” web site, though not because of his picketing the Russian embassy due to the murder of his long-time friend Boris Nemtsov, or the film dedicated to this Russian liberal politician.

–“There was nothing remarkable in the fact they were friends: they were very much alike”, writes Sheremet’s acquaintance, journalist Ekaterina Gordeyeva on the Meduza site, adding that “Sheremet’s biography is, unquestionably,  a history…of being true to one’s convictions.” Incidentally, Aleksey Navalnyy said shortly after Sheremetev’s death was announced, that in 2015 Sheremetev came to Moscow to pay his respects to Nemtsov, adding that “Pavel was an outstanding journalist and in general a good person.”

For some reason, it was Sheremet who took, on June 17, 2014, the first interview from the Azov Battalion commander Andriy Biletsky, who previously carefully avoided media attention due to his neo-Nazi past. The interview, by the way, was in every respect worshipful of Biletsky.

Sheremet did PR for Azov right up to his death. His final post on the Ukrainskaya Pravda blog dealt with the threat of “clearing” the Azov base due to its members’ participation in a series of armed robberies of banks and armored cars.

–“Top leadership’s hotheads want to send spetsnaz to Urzuf and attack the Azov’s base to search for evidence. Two aircraft were made ready in Kiev, Sheremet wrote with a hint of fear. –But one must give credit to the SBU chief Vasiliy Gritsak…he was smart and patient enough to prevent a bloody absurdity”.

Interestingly, Sheremet’s mirror blog on another popular Ukrainian internet resource proudly displayed his photo with his fingers flashing a V against the backdrop of the Azov banner, taken during the summer of 2014 by AFP journalists at the unit’s base.

–“We lost one of our few friends in Ukrainian journalism, the Azov press service candidly reported.”
–“Given conditions of information blockade against our movement, Pavel was not afraid to write about us: thanks to him, Ukrainskaya Pravda ran a series of reports about the Evhen Konovalets sergeants’ school. This morning, Sheremet was supposed to report on the Azov action in support of coal miners.”

Sheremet was similarly dedicated to supporting right-radicals in the Russian media.

–“In principle, nobody, of course, is shedding tears because of Buzina or Kalashnikov, because they committed many sins during their lives,” Sheremet said on April 17, 2015, during a Dozhd TV broadcast. –“To the last moment, this infamous “fifth column,” these enemies of Ukraine, the pro-Russian forces, was operating openly, arrogantly, publicly expressing their hatred toward the state whose citizens they are. And they were openly engaging in subversive activities. Naturally, many people were asking the government: will you at long last establish order? It’s just not allowable for media which are secretly financed by Russia, or financed by people with international arrest warrants, to operate openly. It was also a problem that was brought up and which could have pushed some radicals, mentally ill people, to such provocative actions. ”

There is one more interesting aspect of his life, namely the “Belarussian Partisan” web site established in 2005 by Sheremet for the purpose of “free and open exchange of information.”

–“To his last day…Sheremet kept writing about what was happening in Belarus on that site,” confirms Gordeyeva (this, incidentally, was an open secret: site address was listed on Sheremet’s Twitter account, he regularly placed links to publications on the site).

“Instructors from Georgia are in charge of the Azov Regiment sergeants’ school”
–Pavel Sheremet, April 17, 2016

Starting in the summer of 2014, his site was posting unabashed propaganda aimed at the inhabitants of Belarus, including both Ukrainian right radicals, as well as Belarusians fighting in various volunteer battalions in Ukraine (the first such article appeared on June 18, 2014, almost at the same time as Sheremet’s interview of Biletsky). But that site was mostly engaged in whitewashing the neo-Nazi Azov.

It published, in particular, a lengthy interview with Azov’s chief of intelligence, Sergey Korotkikh, nicknamed Malyuta (the ex-fuehrer of the National Socialist Society, wanted for terrorism by Russia) and the reports on Azov’s training activities at its Kiev base, which were intended to popularize it with Belarusian citizens who could join the unit, acquire experience, and, without attracting  Belarusian intelligence’s attention, return home.

–Sheremet often said that he felt himself free and safe in Kiev, where he at first came to work on temporary stints, then set up his shop here and even learned Ukrainian,” says Gordeyeva.

He felt comfortable there, while the right radicals were free to kill pro-Russian activists nearby, people whom Sheremet later labeled “fifth columnists” engaged in “subversive activities.” But then suddenly something went wrong.

Southfront does not know what a “Nazi” even is. “Nazi” is shorthand for ( Ashkenazi-Jews ) which is an ethnic group of Jews from the old Khazarian Empire of northern-Turkey from over 1,000 years ago. Ashkenazi-Jews should not be confused with Sephardic-Jews, who are actual Hebrews. Ashkenazi-Jews became so evil, that people just started calling them Nazi’s 200 years ago. When the Ashkenazi’s declared war on the indigenous-Germanic peoples, they knew they needed to manipulate the minds of Americans of wage a genocidal war against the indigenous tribes of Germania. To do this, they took the word “Nazi” applied to them, and expose a whole new group to the slanderous name. Americans not knowing that it stood for Ashkenazi-Jews, started believe it was a name used against the indigenous tribes of Germania. Anyways, to make a long story short. It is more Zionist-supremacist treachery. HERE IS THE PROOF: https://www.youtube.com/watch?v=GHXQFt4dySY

This is crazy shit, Nazi was the acronym for National Socialist Party, what proof is this crackpot talking about?