The United States government has never allowed independent governments in Latin America. Every time people elect a government that represents them instead of US economic interests, Washington overthrows the elected government. Marine General Smedley Butler told us this as have many others. There is no doubt about it.

Currently Washington is trying to overthrow the governments of Venezuela and Nicaragua and has bought off the Ecuadorian government with oil purchases and the usual personal bribes. Evo Morales government in Bolivia is also targeted by Washington. The Obama regime succeeded in removing the reform governments in Honduras, Argentina, and Brazil. 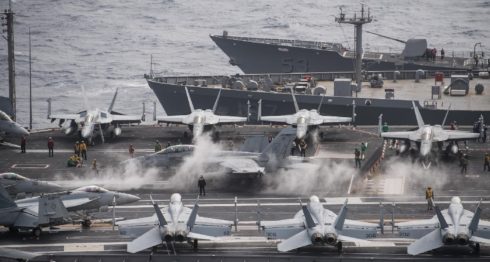 An F/A-18F Super Hornet assigned to Strike Fighter Squadron 41 prepares for take off from the aircraft carrier John C. Stennis in the Pacific Ocean. (David A. Brandenburg/Navy)

Reform governments in Latin America, except for Castro’s Cuba, always leave themselves set-up to be overthrown. They foolishly or impotently permit Washington’s agents, such as the National Endowment for Democracy, the US Agency for International Development, and various so-called NGOs, whose purpose is to maintain Washington’s control and overthrow every government that escapes control, to organize and fund opposition groups and media that work hand-in-hand with Washington to reinstall a Washington-compliant government.

As Marx, Lenin, Mao, and Pol Pot understood, you cannot overthrow an oppressor class if you leave them unmolested. Whether from weakness or stupidity, Latin American reform governments always leave the electorally defeated oppressor class and its economic and media power unmolested. When Washington reinstalls the oppressor class, the same tolerance is never shown to the overthrown reformers who usually pay with their lives.

All Latin American reform efforts have made the foolsh mistake of leaving the oppressor class with their newspapers and their traitorous connections to Washington in place, including the government of President Ortega in Nicaragua. One would think that Ortega would know better. Washington has been trying to get rid of Ortega and the Sandinistas since the Reagan administration. His government has survived the latest Washington-led coup attempt, but Washington is pouring more money into the effort. Read Kevin Zeese’s report here: http://www.informationclearinghouse.info/49933.htm

Hugo Chavez made the same mistake in Venezuela, and his successor has repeated the mistake. The post-Castro Cuban government is now also falling into the trap of becoming an American vassal as it was under Fulgencio Batista.

The Monroe Doctrine has always been glorified in US textbooks as warning European colonialists away from Latin America. The Americans intended it for themselves and succeeded in keeping Latin America as a colony. The Organization of American States has always been in Washington’s pocket and remains there today. Latin America accepts its colonized existence and does not come to the aid of those democratic governments that Washington targets for overthrow. Latin America is impotent, because its leaders are paid off, blackmailed, or threatened by Washington.

Washington has pretended forever to be the great friend and protector of democracy, but every time an independent government comes into existence in Latin America, Washington overthrows it.

In 2015 President Barack Obama, America’s first Black President and “great friend of the oppressed,” citing “the unusual and extraordinary threat to the national security and foreign policy of the United States posed by Venezuela,” signed an executive order and imposed sanctions. Obama’s excuse was the Washington-incited violence that led to the arrest of some of those committing acts of violence. Washington quickly termed the criminals Washington had incited “political prisoners” and called for “dialogue” instead of “silencing critics with arrests.” Washington declared the arrests of those commiting acts of violence to be “human rights violations by the Venezuelan government.” http://www.msnbc.com/msnbc/obama-declares-venezuela-national-security-threat-imposes-sanctions

The presstitutes reported this with a straight face.

A government that has no shame whatsoever in telling the most transparent lies while actively trying to overthrow a democratically elected government is a government that deserves universal condemnation. Yet the world is too well paid off or scared to open its mouth.

>>As Marx, Lenin, Mao, and Pol Pot understood, you cannot overthrow an oppressor class if you leave them unmolested.<<

Like those guys did so much better. Mass murder, secret police and concentration camps on an industrial scale, millions dead, many more who suffered, such good things.

Thing is though, under a democratic system, the people whom you replace through elections, can replace you again come the next election. That is how the system works. If you start murdering those who were in power before you, you become no different and all you accomplished is replacing an oppressor class with a new oppressor class.

“…Thing is though, under a democratic system, the people whom you replace through elections, can replace you again come the next election…”

Let’s hope not. Although I do have the faith that if she were to run again against Trump in 2022 she will lose again. The Wicked Witch, and her party too for that matter, have completely failed to address why they lost to the Orange One. All the indulging in this ‘Russia did it!’ fantasy will see to that.

Unmentioned in other commentary, is the fact that many Democrats voted for Trump, not able to stomach the Wicked Witch. Her laughing over Qaddafi’s murder is unforgettable.

Exactly what Maduro and Ortega are doing right now in their countries, oppression of public, arming only their followers who criminally attack any opposition.

Bolivarism is destroying both countries, and yet Paul Craig Roberts think these guys are heroes just because they say a few words against murica, but actually do nothing of substantial against murican interests.

Haha this writer is not familiar with the UK-Empire and how they conquered the American mind from within using mass Media and Banking lol. They also never heard of Israel I see. Kill off Israel and the UK Empire, and the US would leave the world alone and retire back into American lands. South Front wrote a great article a while back titled “THE INVISIBLE BRITISH EMPIRE” https://southfront.org/the-invisible-british-empire/

Fuck this notion that leftist neobolcheviks like Lula and Maduro were “independent governments”!

Luis Inácio Lula da Silva and his party defend all this cultural leftism LGBT/feminism/affirmative action destroyer of peoples, and debt slavery, they serve the interests of international neoliberalism and western social-democracy.

Paul Craig Roberts is being openly intelectually disonest about Brazil by reproducing this dumb leftist narrative, or he is just willfully ignorant.

So, I was censored TWICE in this news for pointing out that Lula government in Brazil has was never independent.

Southfront is beggining to look like a leftist mouthpiece.

Grew up in a part of Ohio that was absolutely controlled by organized crime. This is more of the same. The psychos have a radar for each other, they network and all the hard working creative people are forced into slavery. Eventually the protection money gets to be too heavy and all the workers move away, notice the rust belt!

There is a kickback going on, people work hard and see the people who don’t have to and the injustice is getting to be too much, for too many people. The greed of the mega wealthy is insatiable, as Kennedy alluded to, “Those who make peaceful revolution impossible, make violent revolution inevitable.”

Throw away your TV, kick the addictions, get clean and healthy. Don’t feed the machine your children for their wars of profit.

Its a little too little, too late. The U.S.as a world hegemonic power has used up too many of her ‘ chips ‘ in the casino that is the world today. Weather the U.S., British, French, and all the northern hemisphere like it or not, there is a new ‘ way ‘ , an new system in the world taking shape at a rapid pace that’s based on a ‘ win-win ‘ situation, as the Chinese like to call it.

The OBR Silk Roads being maritime and land routes, is poised to connect the world in a way unheard of. China is pumping 25 trillion in just the first 10 years into this. It promises member states infrastructure development, housing construction, schools, universities, hospitals and roadways. Just take a look at test case Angola, and see what the Chinese have done there.

This ‘ new way ‘ will bring mankind to a new paradigm shift from usurious international Jewish banking, that is unfair, corrupt, and enslaving. The cause of wars and so much unnecessary human suffering.