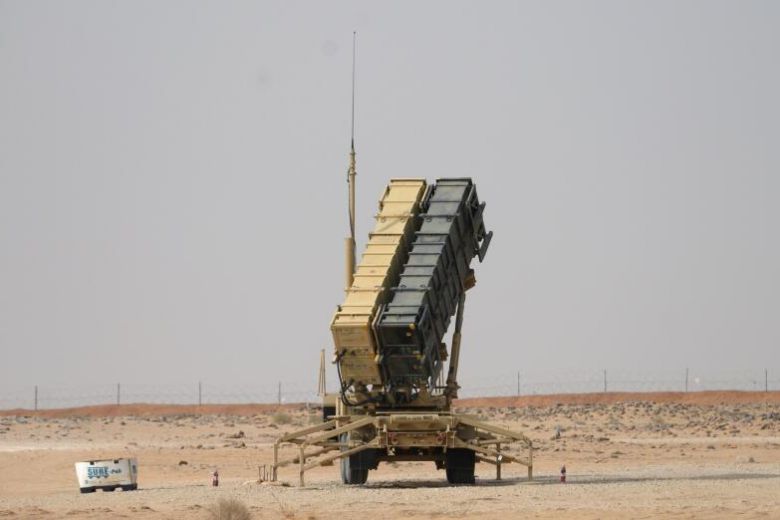 On March 31st, Turkish state outlet Anadolu Agency reported that two missiles were fired on the Ain Al Assad air base, which were intercepted by Patriot defense batteries.

The Iraqi officer who spoke to Anadolu Agency on condition of anonymity said that Patriot missiles intercepted two rockets launched towards the Ain al-Assad base west of the al-Ramadi city.

On March 30th, Washington deployed Patriot missile defense batteries in bases hosting U.S. troops in Iraq, in Ain al-Assad base and Harir base in Erbil.

On March 31st, Usbat al-Tha’ireen (UT) (The movement of Revolutionary Association; the League of Revolutionaries) issued a statement saying that they cancelled plans of an attack on US forces at Ain al Assad base in Iraq.

According to the statement, the operation against US officials visiting there was called off because there were many Iraqis present with the Americans.

“League of the Revolutionaries” claim that they launched a “major operation” but ultimately called it off in #Iraq today. They claim the target was a meeting of American officials at Ain al Assad base. The op was called off due to a high presence of Iraqis w/ the Americans. pic.twitter.com/ap545Vm8sF

The group is the one that claimed responsibility for an attack on camp Taji, that took the lives of 3 US-led coalition forces on March 11th.

In an official statement released on March 15, the group confirmed its responsibility for the recent rocket attacks on Iraqi bases hosting U.S. troops.

“In response to the request of our Mujahedeen brothers … we declare that the blessed operations [the shelling of occupation bases] are our operations, and we fear no one by announcing this,” the statement reads.

“The assassination of our martyr leaders is heat in our chests, a motive for our conscious that will not trail off until the withdrawal of the occupying forces in a humiliating and degrading manner,” the group said.

On March 17th, the group issued another statement, with a video message, threatening the US forces in Iraq.

“The movement of Revolutionary Association, Usbat al-Tha’ireen, promises the Iraqi people, the families of martyrs and the people who were wounded by the enemies and their allies, the devil America, we promise that what happened in Taji and Basmea is nothing but a simple message to clarify the fact that this is the least that we can use against them, also to clarify that our victorious, blooming, full of pride and dignity resent has more long rang weapons that can perish you in the land of your spoiled child Israel,” the group’s member said in the video.

UT called on President Donald Trump to withdraw all U.S. forces from Iraq. The group threatened the Oklahoma Air National Guard and the 277th Aviation Regiment. Both units are deployed in Iraq as a part of the so-called “International Coalition”.

“Leave vertically, before we force them [U.S. forces] to leave horizontally [in coffins],” the group’s member warned in the video.

And, now, they continue their activity by making a claim that they were about to carry out an alleged attack, but gave up. Which seems like a publicity stunt more than anything.

I find this hard to believe

:)) No, they don’t. It was only the turkish agency delivering a commercial. I don’t see why an Iraqi official would hide his name in a non-sensitive case like this, but I understand US needs to pretend they shot down everything that flies.

Those missiles must have been of the hot air balloon/cruise missile type for the Patriot to have worked.

LOL, this is bogus, fake news.

I can believe that the paytriot could have intercepted a scud or something similar with a high ballistic arc.

But so far the Iraqi resistance has only been using 100mm rockets, and I doubt they will be using any theater range ballistic missiles.

Like using a canon to shoot quail. I thought they had some shorter range system that was more appropriate for a rocket / mortar attack.

We do. Not sure if delivered, yet. Pantsir S-1 ripoff with counterbattery: Stryker A1 IM-SHORAD. [link]. Then there’s the land-based R2D2 gatling gun thing (Phalanx CIWS), but haven’t seen much of that contraption lately.

Kind of bad optics when you’re nation’s military is so unwanted by the host nation to ‘protect them from ISIS’ that you need these kind of defenses. The more practical response is to GTFO.

The rockets fly to low for Patriot. The patriot missiles is also very expensive and isn’t used for small ballistic rockets.

Good decision by the U.S Army.

That is the Jewhadi way I suppose.

Those “missiles” are more likely rockets. I just don’t see Iraqi PMU’s building a multi stage ballistic missile along with a launch pad in buddies garage but all you need for a single stage rocket is a piece of pipe and some way of adjusting the angle.

According to an un named source, LOL.

Those Paytotrot systems couldn’t hit a barn door in front of them ffs.

Was the un named Iraqi named Comical Ali, or what!

The USA is 15 years ahead of the russkies in missile/air defense tech, enough said!

The US is 15 years ahead alright, in its implosion.

Trust a Jewhadi like yourself to believe that the Paytotrot missile could shoot down a 100mm weapon. The US are trying to buy Iron Dome, which was designed by Russian emigres to Israel ffs.

Meanwhile, the Jewhadis still pray to golden calves, and mutilate their sons, savages.

jewhadi! i am adding that to my lexicon for american cunts and zionist bastards

They don’t reply when you use that term.

Don’t forget the Khazarian Turks in that.

“Anadolu Agency” is a shameless pro-Erdogan propaganda outlet, so take anything they claim with a grain (or large tablespoon) of salt. Haven’t seen any official confirmation yet.

rockets cost ha’penny each and a patriot missile cost millions. so guys who wish to get rid of the dysfunctional states of A, fire more rockets willy nilly on the green zone and the missiles will a) miss 75% of the ones fired and the remaining 25 will be downed by the missiles at a tremendous cost and given the state of the yankeetwats economy, might just break the camel’s back.

otherwise, whenever there is a coronavirus infected party, send them into the next base holding soldiers from the dysfunctional states of A: