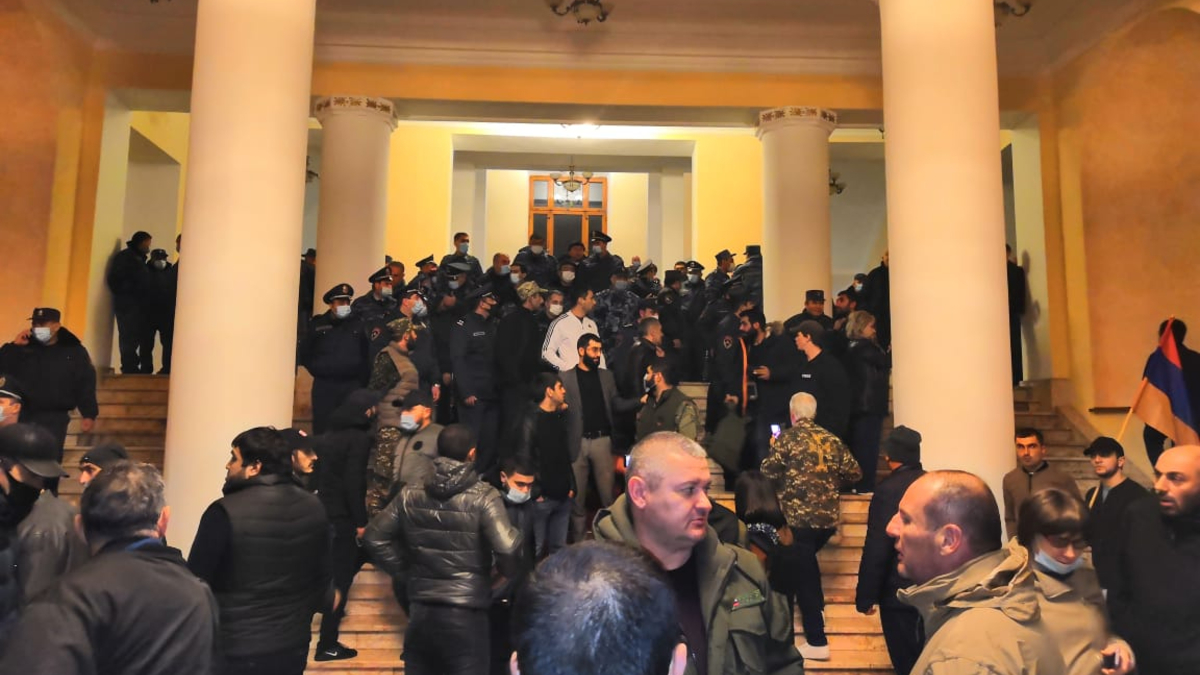 Armenia still cannot calm down after losing the recent war with Azerbaijan. Political instability here leads to regular mass protests. Today the capital of the country, Yerevan, was swept by a new wave of demonstrations.

Opponents of Armenian Prime Minister Nikol Pashinyan, supporters of the Dashnaktsutyun party, are chanting “Armenia without Nikol” and demanding that officials stop supporting the “traitor to the country.” The protesters managed to enter one of the buildings of the Armenian government that hosts several ministries. However, they do not advance in the building and do not clash with security. Apparently, they do not aim to seize the building.

The current aggravation is due to due to the confrontation between Prime Minister Pashinyan and the Armenian military.


The on-going conflict leads Pashinyan into a political coffin. And he also twists the knife.

On March 1, it turned out that, according to the spokesperson of the Prime Minister, Pashinyan had been misinformed about the state of the Russian Iskander systems in service with Armenia.

We recall that on February 24, Pashinyan said in an interview that the Russian Iskander missile systems in service with the Armenian army turned out to be ineffective during the war and “worked only by 10%”.

The Russian Ministry of Defense responded by saying that they were “confused and surprised” by Pashinyan’s claims, since Armenia claimed not to use these systems during the conflict.

After his statement, Pashinyan had a conversation with Russian President Vladimir Putin, who apparently explained to the Prime Minister the quality of Russian weapons.

“Based on the comparison of the available facts and data, the Prime Minister of Armenia came to the conclusion that he was not properly informed about this situation,” Pashinyan’s spokesperson said. The press secretary added that Pashinyan’s words “have nothing to do with the content and quality of the Armenian-Russian allied relations in the field of military-industrial cooperation.” She called Russian weapons “one of the best in the world.”

The Prime Minister found himself in a very awkward situation. Armenian President Sarkisyan rejected his first demand for the resignation of the Chief of the General Staff Onik Gasparyan. At the same time, offended Pashinyan’s team stated that this refusal could become a reason to start the impeachment process of the head of state.

Despite the refusal, Pashinyan kept trying and sent the second request to the President. On March 1, the Prime Minister was supported by the Security Council. For the first time, the President of Armenia refused to sign a decree on the resignation of the Chief of the General Staff, as it “fundamentally contradicts the Constitution.” Now, he has three days to consider the second application.

Pashinyan’s claims about the malfunction of the Russian complexes turned out to be a lie. His statements about their work by 10% were absurd. The footage confirmed that Armenia used Iskander at least once during the armed conflict against Azerbaijan.


His today’s statements on misinformation sound even more ridiculous. Moscow did not agree on its defamation in order to save the poor premier. Now, if Pashinyan needs a helping hand, he will find one at the other end of his arm.

It is reported that in opposition to on-going protests, the Prime Minister plans to march with his supporters.

At the moment, it is difficult to make any assumptions about the outcome of protests in Yerevan. However, it becomes obvious that Pashinyan does not have many choices left. If he decides to storm the presidential palace to overthrow Sargsyan, a political crisis and an increase in tensions cannot be avoided.

For every traitor fate foresees at least one revenge, here there are many to claim revenge against the traitor, how can he escape his destiny?

Hang himself before others do it for him…

It appears that Jens Holme arranged for Jen Psaki, the current Whitehouse press clown, to brief Pashinyan with the latest Biden US ‘intelligence’ reports on the Russian weapons availability in last years Armenian conflict.

He will hold on to power. People are not dumb, they understand that any leader will result in a same outcome if the dependency from a 3rd country is not eliminated. People will use him for independence and euro integration and then move on. He seems not to mind.