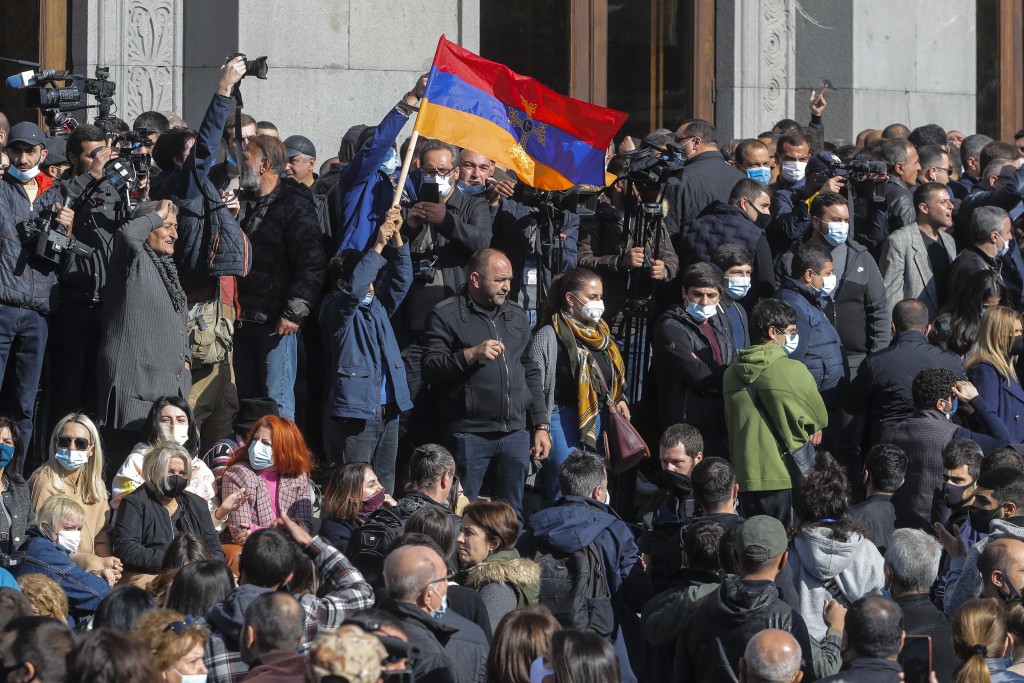 On November 12th, the Special Investigative Service of Armenia published the names of political figures detained for organizing illegal actions.

These include the leader of the “Prosperous Armenia” party Gagik Tsarukyan, Head of Rodina, ex-director of the National Security Service Artur Vanetsyan, Ishkhan Saghatelyan, a representative of the Dashnaktsutyun party, and 6 other less influential opposition politicians were placed under preliminary arrest.

Also, on November 12th, Armenia and Artsakh closed their airspace.

The air defense forces of the Armenian Armed Forces, together with the aerospace defense forces of Russia, cover the airspace of Armenia and Artsakh, this is a closed zone for flights, with the exception of military and civil aviation.

This was reported by the press secretary of the Armenian Defense Ministry Shushan Stepanyan, refuting the information about the flights of Turkish UAVs in the skies over Armenia.

The President of the national Assembly of Artsakh Arthur Tovmasyan apologized for the loss in Nagorno-Karabakh.

“It is my fault that I have not been able to establish peace and unity in my Homeland for at least four months, it is my fault that my only weapon is my sons, who still confront reality from their positions, I am guilty of being powerless. I have only one message for my grandchildren – to become Soghomon Teyleryan in this life.”

To show that Armenian Prime Minister Nikol Pashinyan is in hiding, and doesn’t plan to give up power, Arrests of opposition leaders began in Armenia.

They demanded his resignation, and he is quite literally doing the same that was done to him before he became Prime Minister. He was sent to prison for organizing violent protests and being part of a very pro-Western opposition.

Among the arrested are the representative of the Supreme Body of the ARF Dashnaktsutyun Ishkhan Saghatelyan, the leader of the Rodina party, the ex-head of the National Security Service of Armenia Artur Vanetsyan, the leader of the Prosperous Armenia party Gagik Tsarukyan, representatives of the former ruling Republican Party of Armenia (RPA) Eduard Sharmazanov and “Homeland” Ara Sahakyan.

Back in 2018, when the “Velvet Revolution” took place, Nikol Pashinyan was riding the wave, and now the protests are essentially coming for him.

In Yerevan, on November 11th, there were thousands of people in the streets and squares demanding the resignation of the authorities, and the authorities themselves looked at their citizens through the bristling chains of police officers. And the response to the protest actions was the mass arrests of their participants by the police.

Pashinyan is still somewhere in hiding, going live on Facebook several times per day while opposition figures are being arrested and protests are being met with either force, or disregard.

He is desperately trying to convince the citizens of Armenia and Armenians around the world that everyone but him is to blame for the defeat.

And first of all, the people themselves are supposedly to blame for not voluntarily going to war in Karabakh.

Like the people themselves, they were previously to blame for the poor results of the government’s fight against the coronavirus, and before that was to blame for the fact that they live poorly.

Although Pashinyan himself stated that he had a magic wand with which all national problems would be solved. At the same time, while the entire Armenian people grieve for the dead and are trying to realize the scale of the losses of the territories of Artsakh.

Pashinyan’s biggest complaint is that some watches and bottles of alcohol vanished after the government offices were thrashed by protesters.

And the Prime Minister did, actually, hint what would happen from the first day of the war on September 27th:

That is, in the event of defeat in the war, the authorities offered everyone to engage in self-deception and to convince themselves that everything is fine.

And throughout all 44 days of the war, the current prime minister of Armenia, former journalist Pashinyan, took mostly inexplicable steps that could not lead to anything but defeat.

With the numerical and qualitative (armament) superiority of the enemy, the only chance for victory for the Armenian side could be a more efficient use of available resources and an iron will, a willingness to do everything in the name of victory.

Pashinyan’s government, announcing mobilization on the first day of the war, did not actually carry it out, relying on volunteers.

That is why many citizens now have a question – if the forces were unequal, as Pashinyan claims and the President of Artsakh Araik Harutyunyan, who shares responsibility for the shameful agreement with him Chief of the General Staff Onik Gasparyan and the Minister defense David Tonoyan, why was the war not stopped much earlier? After all, this could have made it possible to save the lives and health of thousands of young children, and also leave Shusha and Hadrut onthe Armenian side.

People are also worried about other questions: why did not Armenia recognize the independence of Artsakh after the outbreak of the war and did not strike at the critical infrastructure of Azerbaijan?

And involuntarily, as a result of the war, one comes to the conclusion that the non-recognition of Karabakh by Yerevan was not conditioned by foreign policy calculations, the hope for recognition by some of the OSCE Minsk Group co-chairs, but simply by the understanding of the fact that, following the results of this war, the NKR will actually be surrendered to Azerbaijan. And the recognition could prevent the signing of such a shameful agreement in the future.

Still pro-government media is asking citizens “who is to blame?” as if it isn’t obvious. 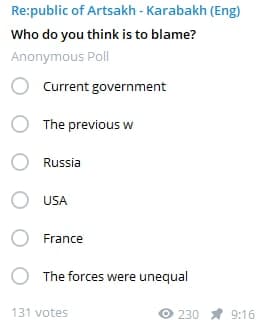 The results, as of 10 o’clock local time sit at 37% blaming the previous leadership, 22% the current government, 18% unequal forces and 16% Russia, with France and USA at 5% and 3%, respectively.

In a statement, French Foreign Minister Jean-Yves Le Drian said that Yerevan and Baku should resume talks over the status of Nagorno Karabakh in order to clarify it and find a lasting solution to the conflict.

This is entirely empty rhetoric, since Armenia’s “true ally” entirely failed Yerevan and undertook absolutely no actions to actually support it.

“The return of people displaced by the conflict in recent weeks must be allowed. It is necessary to determine the future status of Nagorno Karabakh”, Drian said.

On Azerbaijan’s side, there are celebrations, but it is also possible that there are plans to further capture more positions in Nagorno-Karabakh in the future, after all, there’s now precedent that it is possible and if Armenia continues with the same chaotic leadership, it will not be difficult.

The defeat was such that Azerbaijani President Ilham Aliyev openly laughed at and mocked Nikol Pashinyan in an address when he announced the victory.

Meanwhile, the Russian peacekeeping posts are being established, there are even tanks deployed in Nagorno-Karabakh, to assist the peacekeeping force.

France saying to Yerevan and Baku to resume talks on NK like Jar Jar Binks ordering the troops to stand https://youtu.be/e5LWjA_xhMI