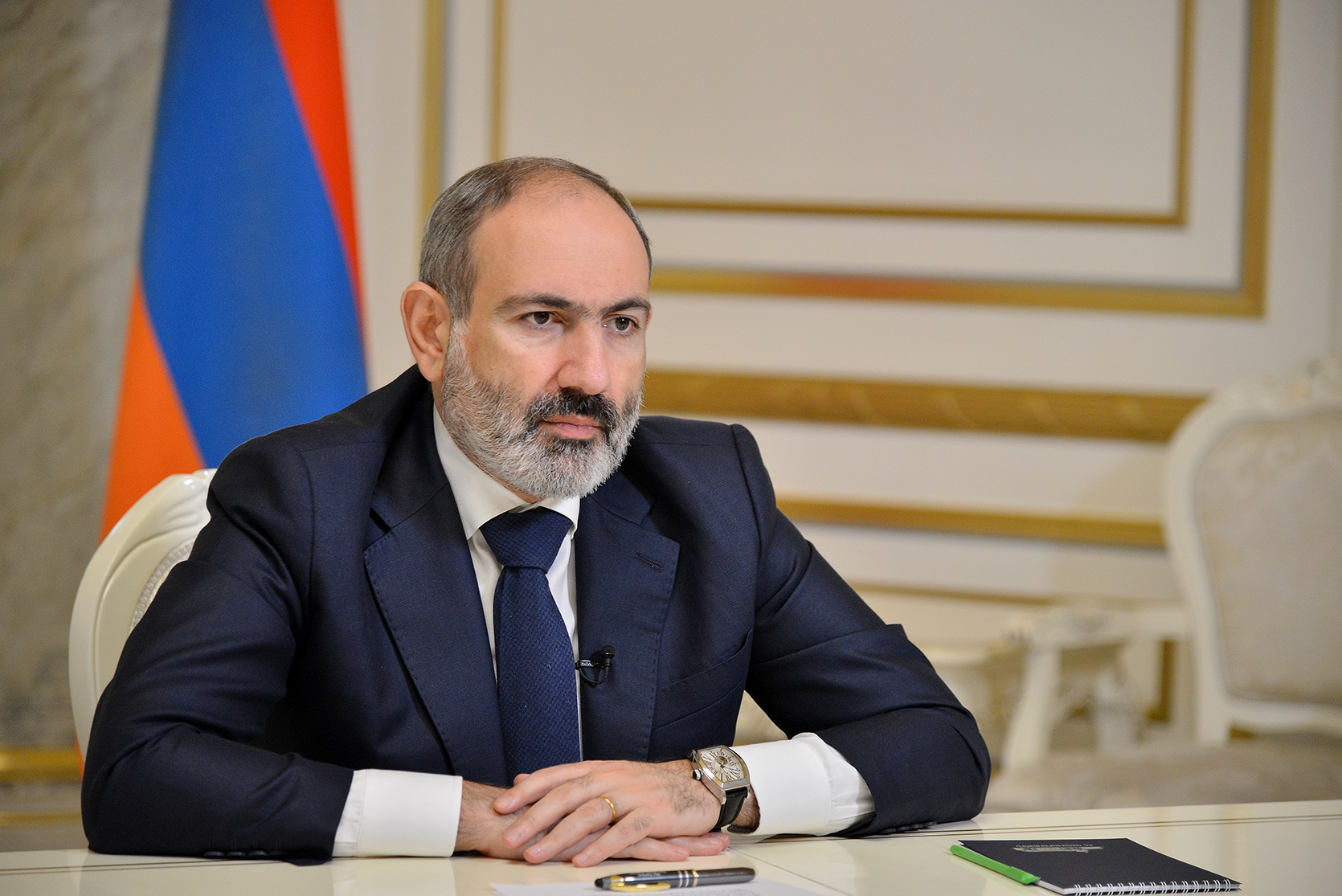 On November 27th, Armenian Prime Minister Nikol Pashinyan made an address to the nation.

He didn’t resign, and he continued blaming various forces inside and outside Armenia for the loss in Nagorno-Karabakh and the chaos inside the country.

“I appeal to you again because, especially in these difficult days, it is very important to preserve our national pride and our national dignity, because pride and dignity are very easy to maintain when it is not under attack, when nothing threatens it, but it is more important to persevere when dignity and pride have come under many blows.”

He said that the government would not resign, and he would not give up power. But that is not because it should be considered a “clinging to power” but rather because there are external and internal forces that allegedly wish to make it seem like there is anarchy inside of Armenia and that needs to be stopped.

“I want to say clearly and unequivocally that we will not allow this, not because we cling to power, but because the people do not want it, the proud citizen of the Republic of Armenia, whose pride, yes, is bruised, but not destroyed, whose dignity, yes, is damaged, but not dead.”

He underlined that following the signing of the peace deal what is currently happening in Nagorno-Karabakh follows the decisions to the letter.

“Continuing my thought, I want to emphasize that what is happening these days is the process of implementing the November 9 announcement. And that process, please pay attention, also implies that in Gegharkunik region, in particular, the Armenian Armed Forces should be located on the state border of the Republic of Armenia, the border that we know as the border of Soviet Armenia, I am talking now, specifically in the part of Kalbajar. Moreover, this limit is determined not by an eye gauge, but by GPS coordinates.”

He spoke of the Sotk mine and that “they” want the war to move to Armenia and are causing issues related to everything that takes place.

And every time this work causes panic, misinformation and a sense of chaos in the society, it is done for one purpose.

He said that the government was doing everything it had to, to protect the Armenian people’s interests.

Then he moved on to state propaganda and said that all claims that misinformation was spread about how the war was mismanaged were false.

“There is a lot of talk these days about the people losing trust in the official media, and the justification is that the government and I allegedly passed false information to the public during the war.

He then played the victim, saying that he did everything he could, and his family too, and it wasn’t right to protest against him.

“But this is not the essence of what I have to say, the essence of what I have to say is that during the whole war the truth was told to the people, it was told according to the rules specific to the war. It was said with faith and purpose to break the situation every minute, and for that we must cherish the fighting spirit and even declare defeats in such a way that it does not break the fighting soldier, the soldier I was talking about, who are invincible until the last moment. keep their position, their line.”

He concluded with a story about peace, how it was important to preserve it, and also not lose focus of retaining stability in Armenia, and to that end there is no way he could resign, after all he brings democracy to Armenia.

Mostly by persecuting the opposition for protesting.

“The important goal today is to preserve the peace that has been achieved, to make it lasting, and if we can make it permanent, much better. Today, the important goal is to ensure stability and security around Armenia and Artsakh, to ensure the security of Artsakh. Ensuring the smooth and safe operation of the Lachin corridor, ensuring the conditions for the return of the people of Artsakh, restoring Artsakh and Armenia, the affected regions.

And for this it is necessary, I repeat, it is necessary to implement the November 9 agreements. These arrangements also include the exchange of bodies of prisoners and victims. From these agreements comes the intensification of the search for the missing, which is a very important issue for all of us, and here every hour, every minute can be fatal. I have met with hundreds of relatives of the missing and captured soldiers these days. Listen to all their demands and complaints. They are right and we must act quickly, but I repeat, unfortunately, it depends not only on us. It depends not only on us.”

Its a classic dilemma. Will a new election be better or not or fx chaos.

They lost a war. The armenians as army was not updated. Armenia has taken land for 25 years, which was not theirs, which also say the Goverment was not for some peacefull solution.

If they had, they might not have the NK almost independent state but some kind of selfrule.

Its over. Pashinyan is destroying Armenia as you speak.

Maybe year at most and Armenia will cease to exist forever as a nation state.

Only the region in NK will be left as it is protected by Russians.

OK . I just told, that loosing leaders can be better then none and chaos.

No leader is better then Nikol Pashinyan who is a national disaster and a total traitor to Armenia and all the Armenian people. Anyone connected to Soros must be put on trial ail for treason and executed.

Another huge victory for Soros and his coup puppets!!! and another massive blow to Armenian statehood!!

The largest gold mine in Armenia is now going to Azerbaijan!!

Soon he will destroy the entire economy of Armenia and they will be begging to become slaves of Turkey. Soon he will tell Armenians they will have to sell their women and children cheap to George Soros and his global organ harvesting ans sex slave businesses. it will be a flesh pot feast for Soros.

Nikol Pashinyan is a hero of Soros Turkey and Azerbaijan!! No one on has done more harm to Armenia since they had the genocide in Turkey.

This week, the Armenian leadership has reached an unprecedented height in its state management achievements. Prime Minister Nikol Pashinayan and his government did not stop at the successful campaign to undermine the Armenian regional position and the epic loss in the Second Nagorno-Karabakh War. Now, they are losing their largest gold mine, which was controlled by the Armenians for the last few decades.

I heard Pashinyan is about to give away control of Armenia’s water resources now as well! You go Pashinyan!!

Soros is laughing at Armenians

He is right in both cases, he was the opposition and took over via a soros/CIA coup, and failed. Soros and CIA are external actors, so technically he isnt lying ?

Thats highly incorrect. Armenia was helped against all the problems they had and probatly partly has today as well.

EU also has invested in that very poor dot, so they at least could have a kind of life.

Putting in Soros and CIA makes no sense at all.

What improved in armenia since 2018?

Refugee count is not positive btw.

You cant name a single thing that helped regular armenian working joe. Democracy is something tjat helps only the rich, not the poor.

Have another tuborg ya lunatic!

Thats descriebed by Internet. Read Yourself. I know the amount og money and who should have done this and that.

Looking around Democrasy is doing pretty well compared to the sheep raising models.

None can change vital things, which has been permanent wrong since aboit 1918.

How many years has USSR used for making that low GDP. Even robbed people has more money and systems then they had AND has.

They dont have knowlæedge and traditions for Our kind of stuffe and as many in the USSR Neocolonialistic collapsed a lot has to start from a kind of ground zero.

Almost all dictatorships have elections.

Yes it is an oxymoron, but it works.

They do it to fool the stupid peasants.

Lay down the LSD Jens… Truth hurts try to handle it…

We didnt collapse Armenia. USSR and its bolsjevics did. They seemes hard infected and long sime ill.

Russia more or less took over Armenia in 1918.

Thankfully, else it woild be called Azeribajan east…

I only know them well from historybooks and some novel, where some heroin smugler got a very good meal in Yerevan.

You got a very good Heroin deal from Yerevan*… Fixed…

P.S. he should resign tho before the parliament is stormed by protesters…

Well, that stormers where the ones, which would fight to all was killed. Thats Your wish or what ???

War is just getting started. In an ideal world, he should resign for his inadequacies and failures. However, it cannot be now. Whoever is the VP or the leader of the parliament should be more active without taking power.

Didn’t he whine about his stolen perfume bottle?

How is this creature still alive?

This Armenian child going back to school in Stepanakert today understands more about geopolitics than Pashinyan. Picture speaks a thousand words.