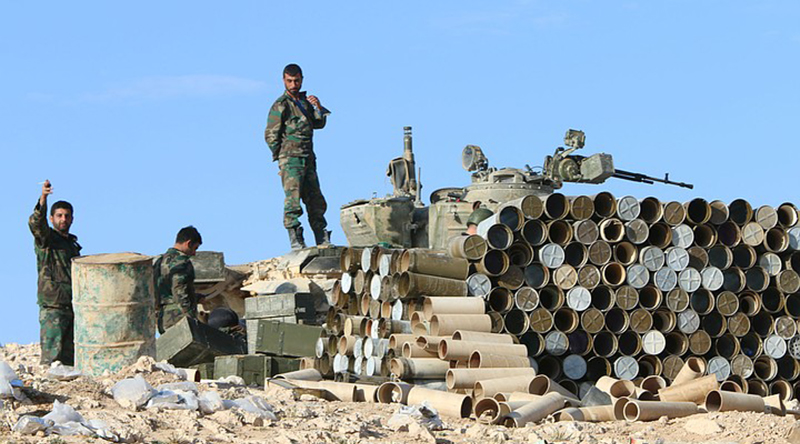 The Whisper of Mortar Bombs

It’s five hours until the ceasefire. We are standing on one of the heights some 7km from Palmyra, an ancient city straddling the Homs–Deir ez-Zor road. In May 2015, ISIS took this UNESCO World Heritage Site. And proceeded to methodically annihilate the architectural relics, blowing up the Allat Lion statue (dating to the 1st Century), Baalshamin and Bel churches (built in 131 and 32 AD), several burial towers from the Roman era…They destroyed everything that could not be carried off for sale on the black market. Or didn’t have value as a fortification.

The militants did not destroy the fortress overlooking Palmyra. Instead they built a fortified observation point there. We can see it well from where we’re standing–powerful, ancient walls over the boulders. All approaches to Palmyra can be observed. And all the hills, including ours. Our hill also has a fortress of sorts, made of rocks, ammunition boxes, and living tents buried among them. Defenses here are held by Hezbollah militants who understand perfectly well the ceasefire will not apply here. ISIS is not covered by the ceasefire, and Palmyra must be liberated. For propaganda reasons, as it will be one of the most resounding victories scored by Syrian forces and their allies and, secondly, liberating Palmyra will open the road all the way to Deir ez-Zor which has been under a total blockade for over three years. Its garrison is being resupplied with food and munitions from the air.

–We hope we’ll receive reinforcements from the ceasefire areas, one of the fighters says. –ISIS fortifications are hard to break through, they are skilfully constructed and laid out. All the roads are mined using TNT-filled barrels laid out in a chessboard pattern. They also have modern equipment–they even try to jam our drones, they have ECM equipment and trained specialists. We have to continually change frequencies to avoid jamming. Their supplies are coming from Iraq. They probably have experienced officers from Saddam’s army who were scattered by the Americans. They are a serious adversary.

The whisper of an incoming mortar bomb forces everyone to press themselves into the rocky earth. The bomb explodes about 100m below us on the slope, fragments fly sky-high.

–They’ve spotted us, says the soldier. –It’s better for you to leave, the next one will be closer.

Artillery located in the low ground, among SAA positions, begins to shell the militants, and we run toward our cars hearing the shells pass overhead. Surrounded by clouds of sand dust, we get onto the lovely highway and drive toward the rear areas among mountain ridgelines where ISIS is still entrenched. Electricity transmission lines along the road have been shredded by shrapnel and bulletes.

Syria’s desert landscapes are decorated by a multitude of little houses built out of cement slabs or cinder blocks. One can usually find a pile of white sand next to them, dug out from an artesian well. But there isn’t a single olive grove to be seen–they perished due to lack for irrigation in the first year of the war and were cut down for firewood. Nights are cold here. In one of the garden shacks, Colonel Osman spreads a 1:500,000 map on two field cots. He outlines the front line, which here consists of a chain of fortified outposts and strongpoints, using a much chewed-on pencil. It takes only a few hours to build one, using a bulldozer. Such outposts are relatively close together, no more than 1.5km apart. Ideally, within visual contact of one another. It makes everyone calmer:

–I can say one thing, we are in a positional defense, the colonel tells us while his pencil stops at one of the heights. This is our problem spot. Different people are fighting here. One shouldn’t exaggerate the power of ISIS, half of them are former farmers and civilians who don’t know how to fight. But here, according to our information, are the chechens?

–They fight in a totally different way…

We see that the colonel doesn’t want to tell us something, but we are insistent.

–We were preparing to take that height a few months ago to broaden the corridor. We did everything by the book. Stockpiled ammo for a powerful artillery barrage. Fired from tanks and howitzers. Saw how the militants were evacuating their wounded and then departing. We didn’t interfere with that, let them leave. We waited for two days, our reconnaissance observed the situation from 1km away. But the group sent to occupy the position came under withering fire. The militants did not leave, they were hiding for two days without giving themselves away. We had big losses. We encountered a skillful enemy–they know camouflage, know how to shift fire. They lay smokescreens. 2-3 jeeps will race in front of our positions, and the third jeep deploys mortars behind the dust screen. Other ISIS can’t fight like that.

–You are not seeking a truce with them?

The colonel gives a short answer:

–They don’t know what the word “peace” means.

This is what Palmyra used to look like–attracting tourists from all over the world.

The first days of the comparative peace gave Russian Aerospace Forces (VKS) their long-awaited rest. There were no sorties. Hmeimim began to separate wheat from chaff–groups against which the war will continue, from those with whom one can find a common language prior to the negotiations. The first “irreconcilable” category includes ISIS and al-Nusra, plus about 10 minor formations. There are at least 100 groups who want a truce and start UN-sponsored negotiations. Only 17 militant groups have so far signed the necessary documents. Fighting has stopped in 24 towns. One may assume that some groups are awaiting concrete results and don’t wholly trust the peace promoters. The problem is that the main organizers of the talks, Russia and US, don’t completely trust one another. But it seems the process has begun.

If the ceasefire continues, the next few weeks will cause considerable internecine fighting among the heterogeneous mix which opposes the Syrian forces, in order to separate all the components. The bands will fight each other and also those who opted for negotiations. SAA, which is exhausted by the fighting, will benefit from it. It makes redeployments possible, in order to launch the long-overdue offensive operations against al-Nusra and ISIS. Indeed, these formations have already given their response to the peace initiatives–an ISIS suicide bomber attacked a checkpoint. A bomb-carrying motorcycle exploded, killing the driver who preferred his own death and the death of his fellow Syrians over the idea of peace.