According to declarations of a senior Palestinian official, Israeli occupation is pushing Palestinian citizens to join the exodus to the EU in great numbers, besides the armed conflict in Syria itself. 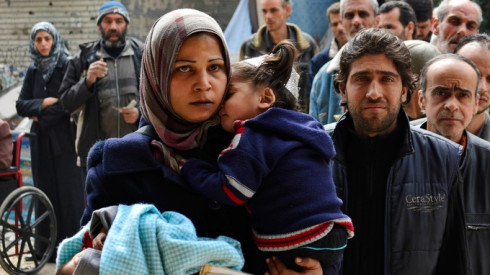 Palestinian refugees in a camp in the Yarmouk camp in Damascus are fleeing intense fighting. Reuters/Stringer

The Secretary General of the Palestine Liberation Organization (PLO), Saeb Erekat informed to the EU Observer that thousands of Palestinian citizens have already started their journey trying to reach Europe, fleeing from harsh situations in territories sieged by the Israeli Occupation Forces (IOF) and other venues like Lebanon and the Al-Yarmouk refugee camp in Syria where people are dying from starvation.

Frontex, the EU border control agency informed of six Palestinian citizens registered while trying to enter Greece aiming to reach Western Europe on January last year, however, that number has raised significantly: 488 on August 2015, 1747 in October that same year and 1142 on January of the ongoing year, despite the dramatic weather conditions and the fact that many of the Palestinian asylum seekers travel without any kind of ID documentation.

Of all the Palestinians trying to make their way to Europe, only a 53 to 87% of them will have success with their asylum requests depending on the country that hosts them.

Erekat claimed that in order to put an end to the Arab-Israeli conflict, a two-states solution is required, adding than Israel is not interested precisely in that kind of arrangement but they aim to establish a single state solution with two systems, which means, according to the Palestinian diplomat, APARTHEID. He also said that Israel’s impunity in the US and the EU is part of the problem.

If Israel doesn’t accept the idea of two sovereign states coexisting, if they prefer the idea of a single state, they must consider seriously that Palestinian people won’t accept less than their legitimate right of self-determination, Erekat added.

The Secretary General of PLO inferred that recognizing Palestine as a legitimate state won’t actually take Israeli occupation to its end, but it’ll surely depict a strong message to all the Palestinian citizens in terms of support to their rights.

UN has informed that within the next 4 years, namely by 2020, Gaza will be unfit for human habitation, nevertheless, Israeli occupation and blockade in the city continues. The West Bank and Gaza are home of over 4.5 million people, 2 million more live in refugee camps in Jordan since wars in 1948 and 1967, some other 500 00 live in camps in Lebanon and another 500 000 in Syria.

I think this is great! I hope every Palestinian family has 10 members and all survive on government freebies from every respective Western European government. Wonderful news indeed!

Not really as Europe will collapse and right wing groups and governments will emerge.