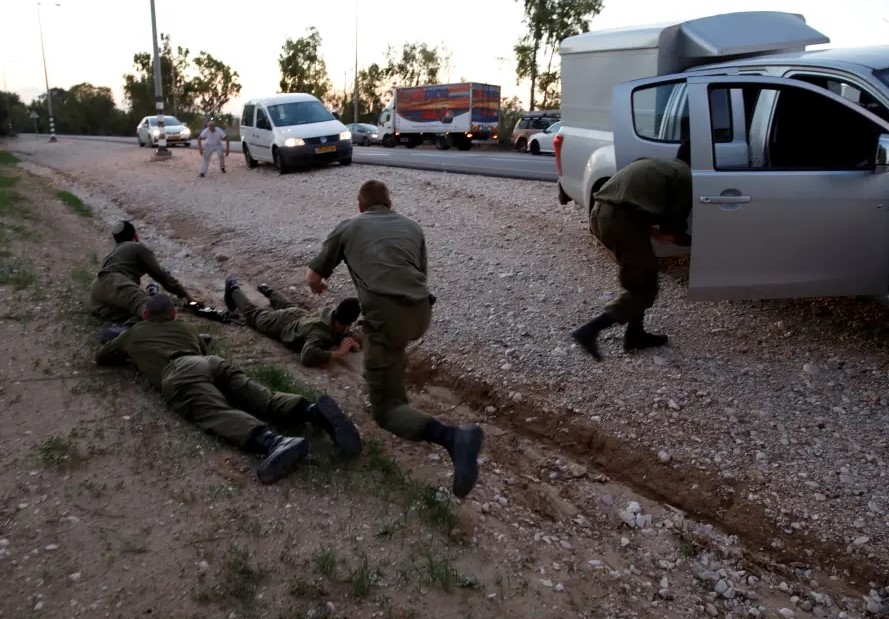 Israeli soldiers and civilians take cover as air-raid siren sounds on a road at the Israeli side of the Israel-Gaza border, November 12, 2018. (photo credit: AMIR COHEN/REUTERS)

Late on August 22, a Palestinian gunman approached the separation fence around the Gaza Strip and attacked a group of Israeli soldiers with several hand grenades in what appears to be another “lone wolf attack.”

In a short press release, the Israeli military said that its units were able to “stop” the attacker, without clarifying his fate.

According to initial reports, no Israeli service members were killed or injured in the “lone wolf attack.”

Meanwhile, Palestinian activists said that the Israeli military is preventing first responders from reaching the site of the incident. Some sources even claimed that the attacker may be still a live, but injured.

Last week, a group of five Palestinian gunmen were killed by the IDF while attempting to infiltrate the separation fence around the Gaza Strip. Back then, Israel limited its response to a single pinpoint airstrike.

So this Palestinian brave hero throws a bunch of grenades to the ZionaziScum soldiers and no one got a since scratch , sure sure

Yeah and now for this they will go and bomb Gaza, Netanyahu IQ – 15

The Palestinians are brave people led by the worst traitors and cowards like Mahmoud Abbas and the PA which is a tool of Zionist criminals who are stealing their lands and killing their children daily with impunity. However, demographics and regional developments are pushing Gaza and all of Occupied Palestine to the brink and a major war is coming. The Zionists are arrogant cowards who are living on stolen lands and on borrowed time. The Zionist cancer has to be eliminated if the region and world is to find peace and justice.

suicide mission but still tells you how desperate the palestinians are and how far the squatters are down the nazi-road of behaviour. it’s time for the world to say no, and a war tribunal with the israeli war criminals in the docket and severe lamppost-hanging as the only punishment and since it’s the squatters we’re talking about it is each and every squatter in the docket and for the lampposts all the way from jerusalem to teheran, like spartacus with the crosses from brindisi (?) to rome. would be a sight to behold!

The Palestinians are basically brave people who have been ruined by sell-out pimp “leaders”. The west bank is now a totally surveillance ghetto where the Zionists control every aspect of their life while Gaza is the world’s largest open air concentration camp where Egypt and Zionists both are committing horrendous crimes against 2 million trapped Palestinians who have no access to clean water, limited food, total lack of medical care, education or even ability to the sea to fish. It is worst real Holocaust in history and happening right in front the world.

how is it with compass – east, west, south and north hohoho – gaza is a concentration camp a la treblinka with the difference that there is, as far as we know, no IG Farben Zyclon B at work. otherwise it’s basically the same and given what happened in the Balkans 25 years or so ago, it is truly shameful that the squatters are allowed to operate it with hardly a peep from the rest of the world. one reason is the fifth columns embedded in various countries and supporting the squatters in their criminal activities with pecuniary subsidies and local propaganda defending the squatters crimes against humanity!

The European Jew is almost completely of Khazaric origin with no trace of Middle Eastern origin, nothing – zero

shouldn’t he be called a handgrenademan instead of a gunman?

To paraphrase the Israelis, the Palestinians must kill and still kill.