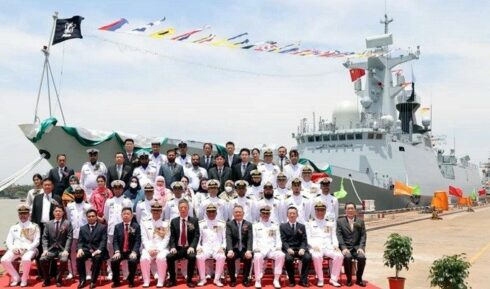 On June 24, the Chinese frigate Taimur from the Hudong Zhonghua shipyard was handed over to the Pakistan. The handover ceremony was held in Shanghai. The ship was the second one that China had built for Pakistan.

The ship, like its predecessor, refers to the “Type-054A/P” model. The boat is equipped with a modern electronic warfare system. This ship is the basic ship in the Chinese Navy. China has about 20 such ships.

The ship has a displacement of about 4,000 tons, and it is 134 meters long and 16 meters wide. The vessel is equipped with several guns: a vertical missile launcher system with HQ-16 anti-aircraft missiles, two launchers with SM-302 anti-caliber missiles, a H/PJ-26 artillery unit, and two anti-aircraft artillery systems “Type-730”, an anti-submarine missile unit and two torpedo launchers. The crew includes about 165 sailors.

Several companies were involved in the assembly and transportation of the ship, including the CSSC state corporation, the Ship Design and Development Center, and the Hudong Zhonghua shipyard.

The ship was awaiting assembly under an order Pakistan signed with China back in 2017. The contract was originally signed for 2 ships, but in 2018 the number of ships was increased to 4 units. Specific dates for the contract have not been published, however, one of the first Togrul ships was manufactured back in August 2020, the ship was already shipped to Pakistan in November 2021.

The Taimur ship was launched in January 2021. Several months were spent on the completion of the ship, setting up the equipment, and testing for reliability, about 1.5 years the ship was undergoing inspections. Two more ships, Tipu Sultan and Shah Jahan, were ready for service back in December 2021.

Admiral Rashid Mehmood Sheikh of the Pakistani Navy attended the ceremony. The admiral noted that the ship will greatly enhance Pakistan’s combat power in defending its borders.

Despite the ship’s modern characteristics, Pakistan has previously had difficulty using Chinese ships. Technical issues and faulty onboard systems have made it challenging to hit single targets. The frigates also reportedly had frequent engine failures.

Pakistan is totally untrustworthy and a stooge of US and China is wasting its money on a dead loss corrupt military dictatorship. Only thing Pakistan produces is poverty stricken extremism while its corrupt military kills its people and loots foreign aid. China needs to dump Pakistan.

LOL what a surprise indians are outraged :D

China even blocked bankrupt beggar Pakistan from BRICS membership, only Iran and Argentina will become full fledged members. Both are developed countries, Argentina has a strong agriculture sector, Iran is an industrial and energy powerhouse in its own right, what does pathetic Pakistan offer? nothing but starving poor and extremists.

Ashok Varma This is PURE LIE PAKISTAN PARTICIPATION WAS BLOCKED BY INDIA AS INDIANS ARE BEHAVING IN CHILDISH WAY ON HEARING PAKISTAN’S NAME BE HONEST AND GROW UP By the way I am NOT PAKISTANI NOR BANGLADESHI NOR ANYWHERE NEAR INDIA OR THERE I want INDIA,PAKISTAN,BANGLADESH ETC TO PROSPER AND BE RESPECTED ON ONLY FOR PHOTO OPPORTUNITIES BUT PUBLIC AS WELL

Pakistan had a very promising leader, Imran Khan that just got ousted by the Pakistani legislature. Every country has resources, it just takes the right leadership.

Some truth to the comment. Pakistan is British imperialist creation like Zionist entity, both at same time 1947 and 1948. It has been doing NATO’s bidding.

James Do you mean India and Indians because WHITEMEN DIRTY JOB IS BEING DONE BY INDIAN BABUS AND BABIES IE PRITI PATEL,RISHI SUNAK ETC BUT WORST IS INDIAN IMMIGRANTION OFFICERS GO TO LONDON HEATHROW AIRPORT SEE HOW THEY BEHAVE TOWARDS NON EUROPEANS EVEN IF THEYBARE BRITISH CITIZENS Or go to town and see how Indian babus in planning sections or any sections in position of authority behave towards non Europeans

Tell us what did he lied about again? He is not wrong and no one is saying Indians aren’t any better.

JJ345 Sad part is Indians ,Pakistanis Bangladeshi Chinese Japanese etc suffer from INTENSE INFERIORITY COMPLEX AND WILL DO ANYTHING FOR FOR THEIR WHITE MASTER READ ABOVE COMMENTS BY ME PLEASE

Ashok Varma As usual Indian Babu your negative comment shows your deep seated bigotry which does NOT HAVE LOGIC OR REASONING TIME YOU GREW UP AND UNDERSTAND WHOSE NEIGHBORHOOD YOU LIVE IN GETTING HYPED UP BY zionist or zio Christian west WILL NOT GET INDIA OR INDIANS ANYWHERE BUT WORKING WITH NEIGHBORS AND MUSLIMS NATION CAN MAKE INDIA A FORMIDABLE ECONOMIC POWER WITH POLITICAL CLOUT THAT THE WEST CHINA,RUSSIA WILL SUCK UP TO INDIA THINK WHAT I AM SAYING AND GROW UP

It seems that the friends of the BRICS are beefing up security for when the US and nato come calling with threats to support western warmongers or else. Wise move, if they still want to do future business with Russia and China.

If the British empire, or the US and nato, couldn’t keep Afghanistan, they won’t be able to take Pakistan either. We are witnessing the last days of western colonialism and its poodle, nato.