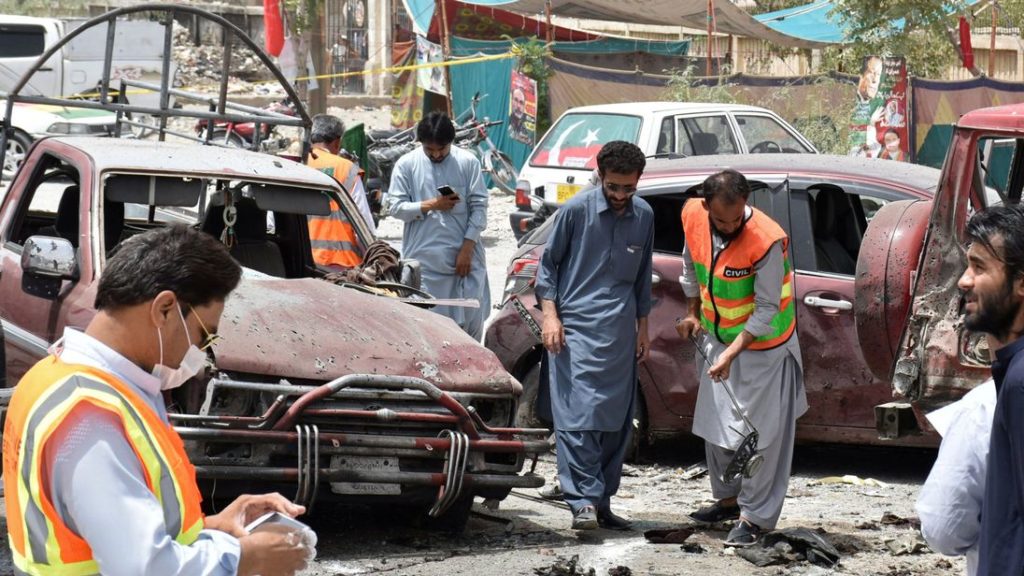 Pakistan’s July 25th elections have started in a row of violence. A state of red alert has been announced in the Punjab province.

A suicide attack outside of a polling station in the city of Quetta has left as many as 31 killed. Five police officials were also slain in the blast. Quetta is Balochistan province’s capital.

A member of Imran Khan’s PTI was shot and killed in Swabi after a clash between ANP and PTI in Swabi’s PK-47 constituency. At least two other people were injured in the exchange. An increase in violence towards PTI representatives is somewhat expect, nationwide opinion polls, as reported by Financial Express, show that Pakistan Tehreek Insaf (PTI) is leading with 29 per cent, followed by Pakistan Muslim League – Nawaz (PML-N) at 25 per cent and Pakistan People’s Party (PPP) at 20 per cent. As also reported by the Financial Express, terrorist and Mumbai terror attacks mastermind Hafiz Saeed is making a debut in the political landscape of Pakistan. He has fielded at least 80 candidates for National Assembly seats under the banner of Allahu Akbar Tahreek (AAT).

Pakistan’s historic second ever democratic transfer of power has seen a row of violence leading up to it. The violence, however, did not stop. Despite the tight security arrangements made for the elections of about 7.5 million security personnel and 1.6 million electoral officials as reported by Mehr News, victims continue increasing.

The campaign’s vicious nature has polarized people into supporters of Mr. Khan’s Pakistan Tehreek Insaf (PTI) party, and the incumbent Pakistan Muslim League – Nawaz (PML-N) of Mr Sharif, as reported by the Independent. It further reported that both parties are attempting to sully the other’s reputation, this could, however, play a bad joke on both of them. A possible outcome of the election is for both parties to not achieve an outright win. The uncertainty is thus reinforced, because the left-leaning Pakistani People’s Party, led by the son of assassinated former leader Benazir Bhutto, which is likely to come in third, absolutely refuses to form a coalition with either party.

The voting to fill the 272 chairs in Pakistan’s National Assembly started early morning of July 25th with women queueing to vote. Nearly 106 million people are eligible to vote. Voting will last until 6 p.m., after which the counting of the ballots will begin.

The vote has been dubbed Pakistan’s “dirtiest election”, as reported by SBS news. This is a result of widespread accusations of pre-poll rigging by armed forces, with Imran Khan rumored to be the beneficiary. The campaign was also filled with expansions of religious extremist parties.

Mehr News further reported that the independent Human Rights Commission of Pakistan (HRCP) said in a statement on July 17th that there were “ample grounds to doubt” the legitimacy of the elections and criticized “blatant, aggressive and unabashed attempts to manipulate the outcome of the upcoming elections.” Despite that the Election Commission of Pakistan (ECP) expects record turnout, as reported by Financial Express.

Ahmed Bilal Mehboob, president of Pilat, quoted by the Independent said “It is a fact that all mainstream parties are complaining about pre-poll rigging, and the mainstream public are not happy with the way the election campaign has been run. In the history of Pakistan we have not had many elections about which we can say they were free and fair. Now we have to see whether the pre-election rigging will fulfil the objectives of the establishment of Pakistan, and what the fallout will be if it does not. I am afraid that [neither] mainstream political parties will accept the results.”

Furthermore, as an answer to all doubts of armed forces influence on election meddling, Major General Asif Ghafoor, Director General Inter-Services Public Relations made a statement on July 10th. He announced that the ECP has sought the Pakistan’s Army assistance in holding the general election in a free and fair manner. He further said that the “Army has no direct role in the conduct of the elections, it is the Election commission’s job to address irregularities.” When asked if Imran Khan would be acceptable to the army, the General answer was “People of Pakistan can elect A B C . . . whoever they elect   is the prime minister. We are nobody.”

On July 13th, leading up to the elections an explosion killed at least 128 people. The bombing in the Baluchistan province was the deadliest attack in the country for more than three years. The attack came after Pakistan’s government launched a crackdown on political gatherings, as reported by the Independent. ISIS claimed responsibility for the attack, offering no further details or reasoning.

The attack coincided with Nawaz Sharif’s return to Pakistan, the former Prime Minister. He returned to Pakistan to rally the supporters of PML-N. He and his daughter, Maryam, were arrested after landing and they are to face long prison sentences. Sharif was ousted by the country supreme court in late 2017 and was convicted in absentia of corruption.

The voting day is still on-going and there may be further outbursts of violence, so far, no media has reported any additional developments.

Blimey, they could be a contender against the US in the “Dumbest and most corrupt elections and subsequent governments in the World today” contest.

“The terrorist verman has fielded at least 80 candidates for National Assembly seats under the banner of Allahu Akbar Tahreek (AAT)” ………Fuck me, priceless.

Imran Khan is ethnic Afghan, so if he wins he will be like Napoleon, a Corsican ruling France, or Stalin, a Georgian ruling Russia, or Adolf, an Austrian ruling Germany. Good luck with that!

India should nuke Pakistan, get rid of those terrorists.