At least one Indian pilot was reportedly arrested by Pakistani troops.

In response to PAF strikes this morning as released by MoFA, IAF crossed LOC. PAF shot down two Indian aircrafts inside Pakistani airspace. One of the aircraft fell inside AJ&K while other fell inside IOK. One Indian pilot arrested by troops on ground while two in the area.

Photos and vidoes of the captured Indian pilot are already circulating in social media: 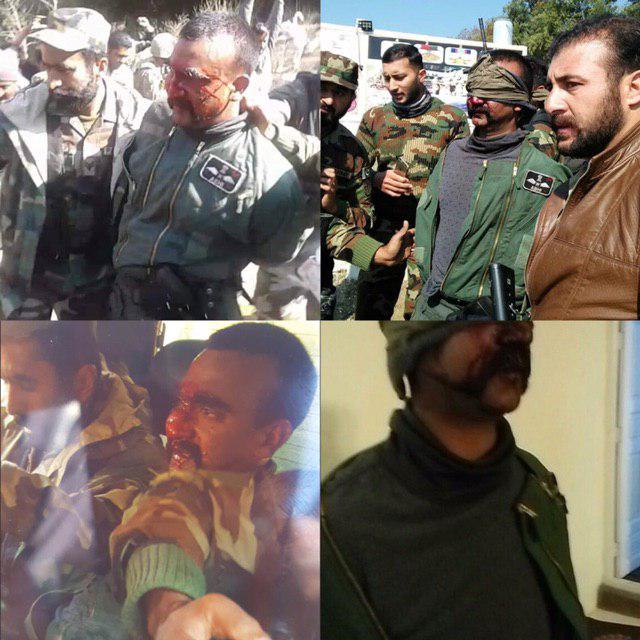 On February 26, the Indian Air Force conducted a strike on what it described as a terrorist camp inside the Pakistani territory. The move led to the escalation of territorial conflict between Pakistan and India over Azad Jammu and Kashmir.

I am no fan of the Pakistanis, but they don’t crap from anyone, their TV has just displayed a captured Indian pilot, with 2 dead pilots and their airforce has struck four Indian airports causing damage. The aircraft used were F-16 and Mirage 5 DPA. Now let’s see if India chickens out.

Exactly, the SAA and Iran both need to do the same. The Pakistanis are just belligerent people, their cabinet and national security committee, no threats and then they unleashed rolling airstrikes crippling 4 Indian airfields and shooting down at least 2 or maybe 2 jets, one Mirage 2000 and 2 SU-27.

Pakistan hasconfirmed that it has carried out airstrikes in Indian-controlled Kashmir and shot down two Indian jets in its own airspace.

It captured one of the pilots as the conflict with its nuclear-armed neighbour continued to escalate.

“Today,Pakistan Air Force undertook strikes across Line of Control from within Pakistani airspace,” the foreign ministry said in a statement.

The Pakistan military said Indian jets had entered Pakistan in response and two had been shot down, with one pilot captured and showed debris of downed jets 3.7 kms inside Pakistani territory with jubilant ground troops dancing on the wreckage.

Sidewinders on F-16, they have a lot experience downing Russian jets in Afghanistan. India has just shut all its airports.

In Afghanistan? really? Bin Laden had f 16? some many lies out there you got confused!!!!!!

Air Commodore Syed Sattar Alvi, the only Pakistani pilot to have shot down an Israeli Phantom and Mirage. In 1973, he shot down an Israeli Mirage aircraft while flying a Syrian Air Force Mig 21 with his compatriot Group Captain Syed Massood Akthar Hussain were awarded the Wisaam Faris and Wisaam Shujaat by the government of Syria and President Hafaz al Assad who praised the Pakistani pilots for their bravery.

If true and Pakistan has attacked Indian airports then bad news for India. It shows they have shit radar and a crap airforce!

India behaves like Israel, and gets shot down. Better call Putin to quiet and calm the events. This consequence is due to British colonialism.

The Pakistanis have a tough airforce and looks like they struck 4 Indian airports with rolling strikes. Lesson for Russia, Iran and Syria, hit the Zionist scum too.

This will happen to Israel just wait.

All of you are bots, trying to start a conflict.

Not really, live person with 30 years of flying experience including L-19, T-37, F-5E and F-4E. Just stating the truth does not make anyone a bot :)

Have you tried the F-5E simulation from DCS?

4 airports!? Now that is a massive escalation.

Well, I guess India fucked with the wrong people. These guys are crazy and will use nukes if it escalates. I have a feeling India will back down as it has much more to lose as the Jihadis will be let loose.

This events are very frightening. Both countries have nuclear capabilities. Watch this: https://youtu.be/yWLGatD__V0

Well India should not have acted macho with the Pakistanis and should worked peacefully like Iran does. Pakistan has agreed to fence the Baluchistan and Sistan border, instead the idiot Modi who is a extremist Hindu launched a half assed air strike on Balakot. The Pakistanis are just born belligerent and decided to up the ante and launched rolling strikes. Now India is stuck.

100% agree.The Pakistanis have Baluch and Pashtun who are Iranic Aryan people like Imran Khan, Yahya Khan, Ayub Khan all Farsi speaking Pashtuns who are a warrior race. India will come out second best as it has more to lose and the Pakistanis will use nukes. BTW, 20-25% of their population is Shia. Many Pakistanis are fighting for Dr. Assad in Syria with the Shia militias.

Wreckage of Indian Mirage 2000 downed by a PAF F-16 using a AIM9X Sidewinder.

Have to admit, US jets are the tops, and the Pakistanis train with Americans and western airforces in Red Flag exercises. The Russian SU-27 did not fare well either and was downed too. The PAF F-16 have the latest ECM and AIM9X Sidewinders and they have a lot of experience flying for Arab airforces. The Pakistanis fly all of UAE Block C F-16.

A UN peacekeeping force for a temporary period is Modi’s best bet. However, i fear that Generals have already made provision for this and may already be executing plans

Now we just need Iran-USraHell, Venezuela-US, China-India, China-Taiwan and maybe the sudden breakdown of the talks between Trump and Kim – and we are up and running… …to the hills (what could go wrong?).

Most of Indian jets are Mig 21 and they have crashed over 250 of them. The Pakistanis have more modern jets like F-16 and JF-17 Thunder. The Indians have around 300 first rate jets like Mirage 2000 and SU-27/30 and some old Brit Sepecat Jaguars. The Pakistani advantage is better trained airforce and airfields close to the border. Like always, Iran despite its issues with Pakistan will support it. Many Iranian pilots trained at PAF combat flying school at Risalpur. India has shafted Iran on oil deals many times.

Iran will stay out of it! They dont want another war next to their country!

India is BRICS – but that doesn’t mean anything, since Modi and his BJP are connected to the Arya Samaj movement, which was connected to Helena Blavatsky and Freemasonry. https://scroll.in/article/690475/a-short-history-of-how-modi-and-rajnath-came-to-believe-that-mythology-is-science

Also William Engdahl thinks India has switched sides: ‘Over the past few months, India has changed its attitude abruptly on several issues. It is as Prime Minister Narendra Modi is trying to sabotage his rapprochement with China and Pakistan and to create artificial conflicts. For William Engdhal, this shift would be inspired by Washington and Tel Aviv.’ https://www.voltairenet.org/article197617.html

So now to whom is Pakistan connectected – that’s also USraHell: ‘The LeT is a Pakistan-based terrorist organisation which also has a strong focus on Jammu and Kashmir, where the recent terror attack took place (and India’s initial response). Both LeT and JeM have received overwhelming support from Pakistan’s Inter-Services Intelligence (ISI) since the early 1990s. In fact, LeT became part of the United Jihad Council in 1993, an umbrella group for militant Islamists operating in Kashmir and in doing so, formed a direct alliance with JeM. As far as the US State Department is concerned, the two groups are almost all but completely synonymous. The ISI itself had been a prime recipient of billions of US aid, particularly under the administration of George W. Bush. The Wikileaks cable clearly shows that the US was well aware elements within the ISI were maintaining ties to the LeT. The cable also noted that Qatar, Kuwait and the UAE have provided support to LeT and other terrorist groups operating in the region as well. All of these countries are US allies.Furthermore, a separate Wikileaks cable confirmed that Saudi Arabia and the UAE have been funnelling money not just to LeT but to JeM directly,..’ https://www.rt.com/op-ed/452461-india-pakistan-showdown-terrorism/

So both sides India and Pakistan are on the strings of USraHell – it’s an artificial conflict, which is only possible because the Paki-Islam Terrorists are already hidden puppets of USraHell. The whole thing is one Zio-Show, to draw more flies into the fire…

Enough to escalate the situation with their militaristic comments morons.

Had to laugh at 748 correction

I feel someone out there is saying, East Asian conflicts wont be limited to East Asia.

Pakistan also began shelling the India-controlled side of Kashmir from across the border — known as the Line of Control (LoC) — on Tuesday evening, a spokesman for the Indian defense forces said on Wednesday.

One aircraft went down on the Pakistani side, while the other crashed on the Indian side of Kashmir, the official added.

“One Indian pilot arrested by troops on ground while two in the area,” he said in the tweet, without elaborating and said the action is on-going.

In response to PAF strikes this morning as released by MoFA, IAF crossed LOC. PAF shot down two Indian aircrafts inside Pakistani airspace. One of the aircraft fell inside AJ&K while other fell inside IOK. One Indian pilot arrested by troops on ground while two in the area. — Maj Gen Asif Ghafoor (@OfficialDGISPR) February 27, 20

new hot zone is about to emerge.

Well, Kashmir has been a HOT ZONE since 1947, when India forcibly annexed it with British collusion. The Pakistanis still managed to wrest control of 40% of Kashmir which they call AZAD or FREE Kashmir. Now they will let loose the Jihadis in India and Kashmir. India has committed horrendous crimes against the Muslim population of Kashmir, which even Iran and Turkey have condemned, like raping school girls and using pellet guns on school kids, blinding over 3,000. BTW, China just came out to support its long term all weather ally Pakistan.

Who would they fly a mig-21 against a capable airforce?

Not very smart people I guess, then again the MIG-27 did not do too well either or the MI-17.

They’re going to need a lot of sausages for that BBQ.

it started with a terror attack! Divide and conqeur ! India and Pakistan got played! And now the region cant developed!

Sinbad2
Reply to  Keep it Real

Exactly the smell of Uncle Sams minions involvement in the terror attack is overwhelming. Pakistan behaved like an adult, but India with Modi, who is the Hindu equivalent of Hitler or Netanyahu behaved like any other Nazi/Zionist/American would behave, that is shoot first, think later.

Not sure about the incident.

Pak says 2 jets were shot down and show the wreckage which india claims is an old footage: https://www.timesnownews.com/india/article/pakistan-peddles-fake-news-jodhpur-mig-21-jammu-and-kashmir-indian-air-force-iaf-wreckage/373412

How fast can the UN act and be on the ground if need be?

Lazy Gamer
Reply to  You can call me Al

They can enact resolutions calling for a cessation of hostilities. Put some sanctions on escalating countries, declaring terroristic entities, maybe put a temporary peace keeping force. Maybe put a temporary no fly zone. Begin some sort of back channel negotiations for how certain groups shall be handled, inter border conduct, arms limitations, begin an investigation, etc. But as usual, UN loves to sit on its own ass doing nothing but serve tptb

PS I think I was originally translating UN = Nato, apologies.

INDIAN made the first move..they are tresspassing, and should have not fly over in Pakistan airspace. God bless PAKISTANI PEOPLE Home of the Martyrs…

You would think that conflict between 2 nuclear powers would be big news, but not in America. Americans are only interested in what a crooked lawyer might say about Trump and how an American journalist had his camera confiscated in Venezuela, such a shallow people.

Problem is the Pakistani and Indian ethnics living in supposed harmony together in the Globalist States territories. (i.e U.S./UK) It’s is a social and cultural engineering (multiculturalism) experiment that could go severely awry.

The Jew run ministry of propaganda msm has nothing to do with what Americans are interested in. Most Americans distrust and disapprove of the msm. If you posted the polls it would make your comment look stupid and untrue.

Pakistan should immediately hand back the airmen. Quit whilst they are ahead. (they’ve made their point that they can defend their airspace)