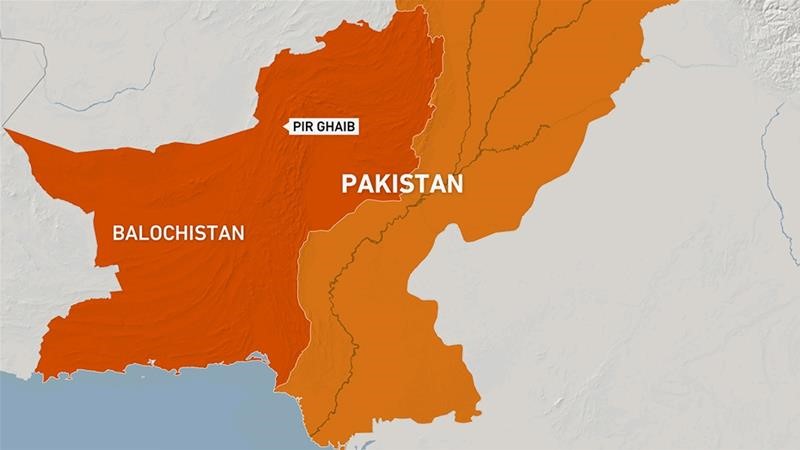 Seven soldiers have been martyred in two separate terror attacks in Balochistan, the Inter-Services Public Relations (ISPR) said on Tuesday.

The province hosts a major deep-water port in the town of Gwadar, a pivotal part of the $60bn China-Pakistan Economic Corridor (CPEC) project.

According to the ISPR statement, terrorists targeted a vehicle of the Frontier Corps (FC) in Mach using improvised explosive devices (IEDs), claiming the lives of six Pakistan Army soldiers. Their vehicle was hit by a roadside bomb while returning to its base camp after routine patrolling duty in the Pir Ghaib area, about 55km (34 miles) southeast of the provincial capital Quetta, late on Monday.

In a separate incident at Kech, another soldier, Sipahi Imdad Ali was martyred in an exchange of fire with militants.

Almost 2 weeks ago five Frontier Corps (FC) soldiers and one officer were martyred after their vehicle was targeted with an improvised explosive device (IED) near the Pakistan-Iran border.

In a tweet, the Inter-Services Public Relations (ISPR) said the security personnel were returning from patrolling in Buleda — 14 kilometres from the Pakistan-Iran border — to “check possible routes used by terrorists in the mountainous terrain of Makran”. That attack was claimed by the Baloch Liberation Army (BLA), an armed group calling for independence for the ethnic Baloch areas of the province. As yet no one has claimed responsibility for the latest attack.

Also, just over a week ago a statement claiming to be from the Baluchistan Liberation Army claimed responsibility for an armed attack against a hotel in the city of Gwadar in Baluchistan province. The statemen t added: “Expect more attacks China and Pakistan.”

A Pakistani military official said that the gunmen had killed a security guard at the hotel entrance. The Chinese Embassy in Islamabad said that two other security agents had been wounded.

The hotel, the Zaver Pearl Continental in the city of Gwadar in Baluchistan Province, is frequently used by top government officials and Chinese workers employed on a port project in the area.

In claiming responsibility for the attack, the separatist group said that four gunmen had carried out the assault and that it was linked to the presence of Chinese and other foreign investors at the hotel

Overall, there was a slight increase in casualties caused by militant attacks in Pakistan in April compared to the previous month.

Militants appear to be trying to get back some territory in North Waziristan tribal district of Khyber Pakhtunkhwa where 90 per cent of casualties in violent incidents during the month of April occurred.

No militant activity was recorded in Punjab, Gilgit-Baltistan, Azad Jammu and Kashmir, and other parts of Pakistan.

Meanwhile, Pakistani security forces carried out a total of 16 actions against militants in areas of Balochistan, Khyber Pakh­tunkhwa, erstwhile Fata, and Sindh. Pakistani forces arrested 12 suspects involved in different terror and anti-state activities, including eight from Sindh and four from KP. Four members of Al Qaeda in Indian Subcontinent were also arrested in Karachi.

Indeed, Pakistan has been a staging post for Wahhabi terror since the 1980’s and has killed more Muslims than anyone. They kissed Americunt arse and totally destroyed Afghanistan and killed thousands of Palestinians.

The Punjabi army has repressed the Baluch and Pashtun minorities and they are fed up as their natural resources like gas are being ripped off. The BLA has been fighting for Baluch liberation since 1970’s when Iran had to intervene to save the Pakis. The Shah deployed a Iranian special forces brigade with AH-1J Cobra and Chinook CH-47 support. Now the Pakistan occupied Baluchistan is Wahhabi, CIA and Zionist terror central that has staged attacks in both Afghanistan and Iran. The Baluch really have a genuine cause to fight for their freedom.

The problem with Baluch is their low population as the Punjabis have changed the demographics and opened up Gwader to the Chinese and the army has taken over Baluch lands, just like Palestine. The Baluch are literally starving and their kids are being killed. I can speak Baluchi which is a Farsi laded dialect as there more Baluch in Sistan and well integrated in Iran. Go to their website called BaluchWarna or BLA (Baluch Liberation Army). They are very tough and courageous fighters, but they are fighting the Paki army allied with Zionists and Amercunts with no support from anyone. The Baluch provide the bulk of Omani army and are well respected for their courage and loyalty. I have great admiration for them.

The paki not all but most of them are extremist. They are already dead despite being officially living.

I mean Punjabi pakis especially. But they think China will save them from future war with India but in the future I don’t know when it will come it will be complete rout fot paki Punjabi army

Being whipped up by CIA?

Are those locals in contact with CIA cash-for-chaos finance though?

It’s all a conglomerate of babil (babylon) which has already lost the war.

Most of choas is in the world is because of the cia. Sometimes fueling both sides in case of Pakistan which is a big example of it. This is one of principles of the talmudic followers. Their master dajjal(L. A) is a cunning chaotic bastard applying tyrant lucifer (L. A) doctrine.

Actually, this goes beyond that as the British imperialist devious cunts divided India into an ungovernable patchwork of sectarian conflicts from Assam, Mizoram, Nagaland, Sikh Khalistan to Kashmir, just like the Zionist parasites were created by them and planted in the heart of the Arab world in Palestine. It is no coincidence that both rotten Pakistan and Zionist cancer were created at the end of WW2 at the same time 1947 and 1948 to sow eternal mayhem, conflict and terrorism in the region and the world. It is called DIVIDE & RULE!

There can’t be millions of coincidences of course. In near future the war will be increased to very large level and that bastard net yahoo should gv up the plans of annexing the west Bank in July this year or it will be very much castratropy especially in the middle east

New terror state of US . Baluchistan is a main base of CIA and Mossad working to undermine Pakistan and iran and china. Pakistan is next to be destroyed by Zionist if Pakistan still slave of America.

Don’t forget Indian RAW, which has excellent relationships with Mossad.

What you say maybe true to some extent now, but Pakistan’s role in kissing Americunt arse and acting as the main conduit for Wahhabi terror since 1980’s USSR/Afghan conflict has been very destructive. Pakistan’s Punjabi dominated military has been repressing is Baluch and Pashtun minorities for their Americunt and Zionist masters, the Wahhabi cunt Zia ul Haq killed more Palestinians in Jordan Black Sepetember than his Zionist masters. So now the chickens are coming to roost for the Paki army of cowardly mercenaries who have lost every war to India, but staged multiple coups and killed democracy in their own shithole and are also licking Saudi and Emirati arse for decades, sad facts.

yes you are true. but also one thing it doesn’t mean Baluchi and Pashtun help US in that area against Iran. U can even trust Baluchi’s and Pashtun in that are they are in very destructive towards iran the border and helping US against iran. They have no understanding in islam and most of them just follow whabhi style islam . Pakistan is sliping towards civil war. and defently Zionist want that.

My friend you are decent guy and I like your insightful comments generally, but your Imran Khan is a Jew creation as he was married to Jemima Goldsmith and handpicked by Zionists. The Pakistan army has played a very destructive role in supporting Wahhabi terrorism dating back to the bastard Zia ul Haq who invited the Americunts in Afghanistan. Pakistan is propping up the Saudi cunts with two divisions stationed near Riyadh and Tabuk. The fat bastard Raheel Shareef is advising the Saudi cowards on how to kill Yemenis and Palestinians. This is not the role of any decent Muslim nation or a friendly neighbor. The current role of Pakistan as a terrorist sponsor suits the Zionist parasites. The Americunts will never let go of Pakistan as it is part of their destructive global strategy and the corrupt army serves the Zionist masters. Believe me, Baluchistan is a local problem and nothing to do with India as it simply has no supply routes to Quetta as the Pashtuns who hate Hindus control the Afghan side of the border and are sympathetic to their Baluch cousins, who both hate the Punjabi army as an alien occupation force. There has also been an influx of Shia Hazaras from Afghanistan who the Wahhabi scum have attacked regularly.The problem with Pakistan is its inability to form a unified non-sectarian national state in 70 years and is just cancerous for the region and the Muslim world in particular as the Zionist cancer, the British devious arseholes planted in Arab Palestine.

Most of chos in today’s world is because of the cia tyrants.fueling both the side for example in Pakistan and then becaming liberators hero’s helpers one of the many principles in the talmudic luciferian doctrine.

Remember baluchistan is a very stragetic place neighbouring Iran and huge Chinese installations which why they are so concerned about this resourced rich province which rich resources benefits the money don’t reach to its rightly owners the local baluchistanis.

That’s one of reasons the paki defence class is so rich with large amount of illegitimate black money.