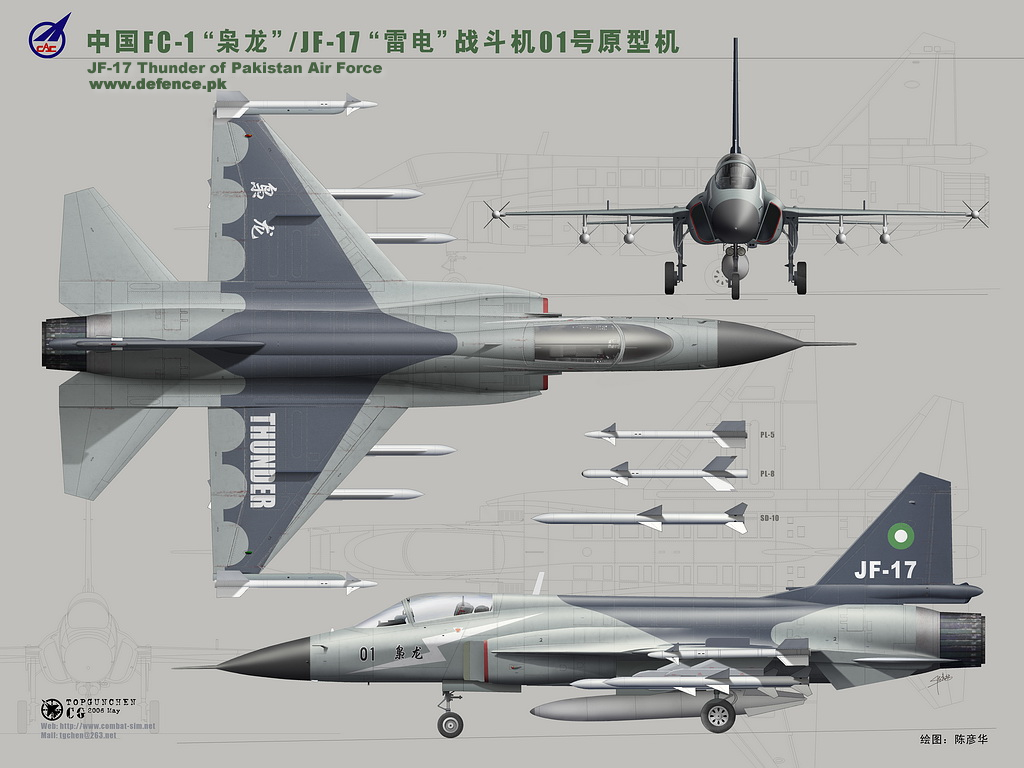 “The only significant change to the aircraft apart from the extra seat is a dorsal fin that contains an additional fuel tank. This means that the JF-17B’s fuel load is comparable to the single seater,” according to Flight Global. “Production of the first JF-17B was initiated by Pakistan and China during a joint ceremony at Chengdu Aerospace Corporation,” the Pakistan-based Dawn newspaper reported on April 28th that AC is located in Chengdu city in Sichuan province in southwest China.

A defense official working on the JF-17B program emphasized that there will be “no loss in combat capability with the addition of the extra seat.” Chinese and Pakistanese representatives familiar with the JF-17N program have repeatedly said that a two-seat variant of the aircraft is under development. The first flight of the two-seat variant is planned for the end of 2016; the PAF plans to induct the first JF-17B in April 2017.

Pakistan purportedly has the capacity to assemble up to 25 aircrafts per year without Chinese assistance. Pakistan and China produce 58 per cent and 42 per cent of the airframe respectively. The chief of air staff, Air Chief Marshal Sohail Aman, said this year in April that Pakistan intends to build a total of 24 fighter jets in 2016.

The JF-17 is in service with the Pakistan Air Force (PAF), where it is meant to replace the PAF’s aging fleet of Dassault Mirage III/5 fighter jets by 2020. In April, the PAF inducted 16 upgraded JF-17 Thunder Block II fighter jets in Kamra, also known as Aviation City, the center of aircraft manufacturing in Pakistan. Overall, there are currently 65 JF-17 aircrafts in service with the PAF. Since its induction in 2011, the aircraft have accumulated a total of 19,000 operational flight hours.

The PAC JF-17 Thunder or CAC FC-1 Xiaolong is a lightweight, single-engine, multi-role combat aircraft developed jointly by the Pakistan Aeronautical Complex (PAC) and the Chengdu Aircraft Corporation (CAC) of China. The JF-17 can be used for aerial reconnaissance, ground attack and aircraft interception. Its designation “JF-17” by Pakistan is short for “Joint Fighter-17”, while the designation and name “FC-1 Xiaolong” given by China means “Fighter China-1 Fierce Dragon”. Powered by a Guizhou WS-13 or Klimov RD-93 afterburning turbofan it has a top speed of Mach 1.6.

The JF-17 is to become the backbone of the Pakistan Air Force (PAF), complementing the General Dynamics F-16 Fighting Falcon whose performance it roughly matches, at half the cost. The PAF inducted its first JF-17 squadron in February 2010 and as of December 2015, 49 JF-17 Thunder Aircraft were in service with 50 additional airframes ordered, of which 17 have been delivered.

A number of countries have expressed interest in the JF-17, including Argentina, Bangladesh, Bulgaria, Nigeria, the Philippines, Venezuela, and Zimbabwe. Pakistan claims that they already have the JF-17′s first international customer. However, until now, Islamabad has not revealed the name of the Asian country that will procure the fighter jet.

Pakistan is aggressively seeking customers for its JF-17 jet fighter. During the last two years, Pakistan has manufactured about 30 JF-17s. The first JF-17s were manufactured in China. But the plan was always to shift production to Pakistan, with the original goal of 25 a year being produced by 2011. This goal was not achieved, but production has been established in Pakistan, and it is growing.

Pakistan is offering the JF-17 for a low price ($25 million in the cheapest configuration) and touts the fact that this is a third the price of an F-16. But this is comparing apples and oranges. The low end JF-17 is little more than a day time interceptor. The most capable F-16 model in service is the F-16I, used exclusively by Israel. It’s basically a modified version of the F-16C/D Block 50/52, equipped with a more advanced radar (the APG-68(X)) and the ability to carry Israeli weapons like the Python 4 air-to-air missile and the Popeye 2 air-to-surface missile. Costing $70 million each, the F-16I has an excellent navigation system, which allows it to fly on the deck (a few hundred feet from the ground), without working the pilot to death. The aircraft can do this at night or in any weather. This further increases Israel’s military power versus its neighbors. In combat, one F-16I is worth more than three JF-17s. But what Pakistan is really touting here is the availability of a jet fighter that is cheap and performs somewhat like an F-16. For many countries, this is an attractive option. The only problem is that there are hundreds of second-hand (and very well maintained) F-16s on the market, selling for less than the bare-bones JF-17.

The Chinese are developing the jet incrementally – upgrading the plane over time with new avionics and weapons – which is a smart move. But the JF-17 will never be a world beating fighter. It may not even be a good fighter – it’s designed for the low-end of the market. But it is designed to be “good enough” for nations that need decent capability that won’t break the bank. But the jet is in production after a relatively quick development cycle; it is being built in numbers and is more than competitive with its nearest potential adversary. In that respect, the program is a success, especially if China can find more buyers. AVIC anticipates a market for at least 300 JF-17 Thunder fighters.