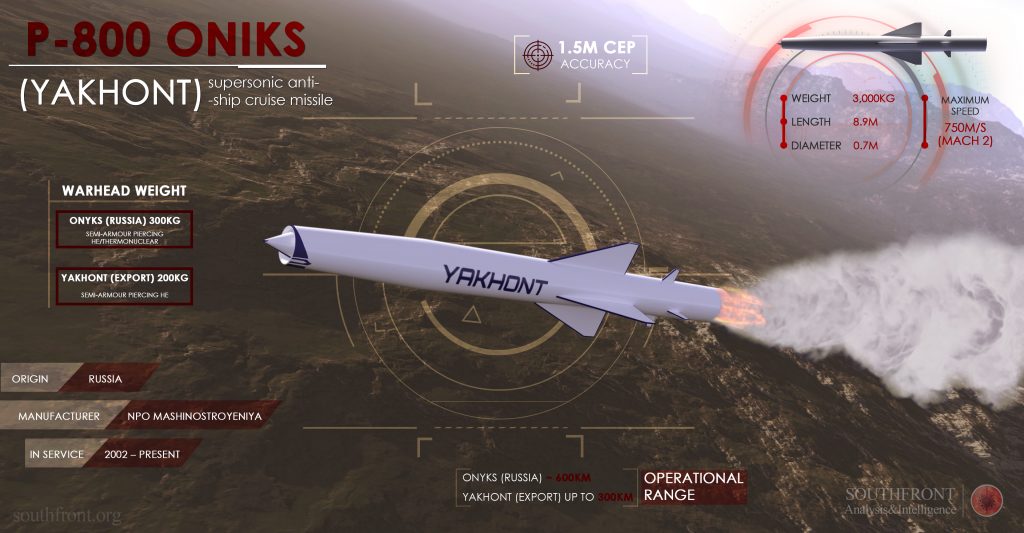 The P-800 Oniks is a Russian supersonic cruise missile developed by NPO Mashinostroyeniya. It’s primarily designed to as an anti-ship cruise missile. However, it also can be used against land targets as it was demonstrated in Syria in 2016, when the Russian military used against ISIS targets.

The P-800 Oniks missile can be launched from warships, land mobile platforms and fixed-wings aircraft. The missile’s export version is designated the P-800 Yakhont.

Now you know why Russia is number one in the missile department.!!

History. The USSR was 10 years ahead of the world in Space Exploration. That 10 years gave them a decade lead in rocket technology that their closest competitor has not yet been able to close.

In aerospace technology too. Even the deadbeat NASA uses Russian rockets for space launch.

Really? In what universe. The USA is currently 30 years ahead of the Russkies in air defense missile systems, radars systems, stealth tech, space rocket tech, and airborne radar systems. FACT.

Russkies don’t have 1 single interceptor that uses HTK capability. Their radars are too inaccurate and unsophisticated for that.

I see you voted for yourself again, you narcissist Ahohl.

Isnt she a beauty :)

Most excellent Comrades. Deterrence is gold. I wish I could carry one of these as a concealed carry…

would love to see a couple or 3 or 4 land on an aircraft carrier’s deck and see the havoc caused. guess they, the disintegrating states of A will station their 10 or 11 carriers far far away, like tristan da cunha or some such islands safely out of the way, particularly when the Iranians put their minds to it and turn out supersonic missiles to take out the riffraff (under-educated american soldiers/sailors) polluting the oceans.

I guess the Russian military are just itching to use their new weapons in anger. Let’s hope the US MIC and its cheap talk doesn’t give them a valid reason.

Ha Ha! So tough with a 1970 design that entered service in 1983! An outdated Soviet missile. The USA and Israel are so scared! :-]