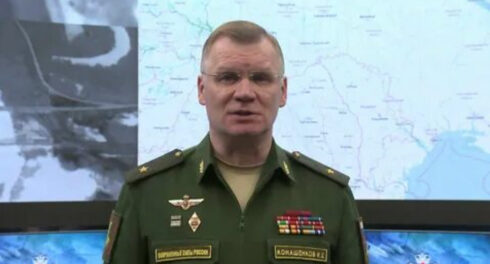 The last week was marked by the increased number of Russian missile strikes in Ukraine. The Russian military struck a number of military facilities of the Armed Forces of Ukraine (AFU) in different areas, along the front lines in Eastern Ukraine as well as in the capital and Western regions. At the same time, Russian warplanes and artillery inflicted heavy losses to the AFU. 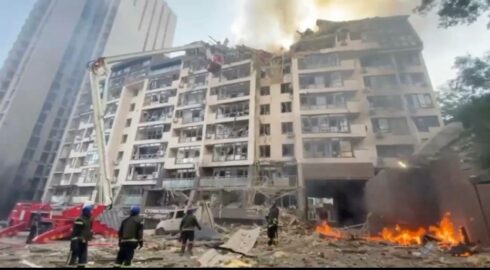 MORE ON THE TOPICS:

Stoltemborg was not on Kiov drinking coffes and making a Blow job to zelonsky ??? F is too much climate change !!! please next time disney go to Kiov bomb then or it looks like a stupid agenda !!!!

Until few weeks ago Russia was very careful with air strikes, in order to reduce collateral damages. The Ukros used and abused this care by deploying their troops to schools, hospitals and private homes. FINALLY Russia understood that she has to strike the Nazis (and their Western weapons) WHEREVER they are, otherwise those same weapons will be used to kill Russian civilians. It’s sad , but there is no other choice.

All hail ZOG Emperor Zelensky, may he soon rest in pieces!

Overview of the Russian terrorist attacks on Kiev is that Vladimir Putin is now the world’s most reknown terrorist. Now that Russia has defaulted on its debt and the Russian economy will continue to move toward total collapse, Putin will intensify the number of terrorist strikes against Ukrainian civilians. If Putin can’t win the war he will go down murdering as many people as he can.

Parker
Reply to  Muhammad your Prophet

Put one thing in your small brain buddy: Russia can not lose the war. Before this happen, she would activate a preemptive hypersonic nuke strike on all NATO bases across the world, 100%. Yes, I myself would not survive such a boom, but this is the reality. Accept it. I do.

And the first 6 potential targets have been published today by Roscosmos. They are pre locked, just in case..

Muhammad your Prophet
Reply to  Jay

The other 6 potential targets for terrorist attacks? Which are those?

Jay
Reply to  Muhammad your Prophet

Is the word “terrorist” really coming from somebody who calls himself “Muhammad”. Dude please. Go back to your hole.

Your shithole basement x6 😀 JK. no one would waste a nuke on a worthless mummified cockroach like you, not worth a bullet.

Last edited 1 month ago by Muhammad your Prophet
-5
Reply

USISIS
Reply to  Muhammad your Prophet

Muhammad your Prophet
Reply to  Parker

Russia cannot lose the war because Vladimir Putin is living in a deranged terrorist fantasy world. He wins just by murdering people. That’s what you’re trying to say, right?

Mo Ham Head Was A Pedo
Reply to  Muhammad your Prophet

And bush ‘won’ in Iraq by giving birth to people, right?

Onxy missiles as I posted before vastly outperform American Harpoon missiles and they are multipurpose not just for hitting ships but land based targets -resistant to decoys-jammers pseudo -random frequency hopping ( multi frequency changes ) -praised highly in the USA.

I heard India has secretly sent BrahMos missiles to Russia and in exchange Putin has sent some of that “confiscated” Ukrainian grain and fertilizer.

Indian foreign ministry denies it supposed to be on sputnik news but don’t see it there so cant back up your post at present.

I can almost not keep myself awake for reading such loser talk. Can’t you go and suck your putin dolls plastic penis instead of boring others?

Ukraine will be invaded by NATO, by the UK, US and Poland, it will be over run, really invaded. The ukrainians will wish they had their soldiers, their weapons, all of the facilities which Russia is destroying, to use, not against Russia but against the real enemies, whom they erroneously consider to be friends. Evil destroys relationships and the relationship they have destroyed is the relationship bewtween Russia and Ukraine. Those evil filth who accused Russia of annexation had their eyes on Crimea and THEY wanted all along, to use, to destroy, to loot and to own Ukraine. Ukraine is now in debt slavery. I ask that Ukraine seizes back its own resources, that it refuses to pay for weapons given so that the UK US EU can wage war against Russia through them. Have a brain Ukraine, friendship with Russia on your doorstep was better than where friendship with the UK US EU have led you, they have created enmity between you and Russia and they have destroyed you.

“Ukraine will be invaded by NATO, by the UK, US and Poland…” Not going to happen because these punks have no more teeth than brains nor balls. The game is as good as over and Natostan slash USSA lost bigly. You did see the rout of USSA in Afghanistan I take it?

Apply for a position as the kremlin jester, you get paid 400 dollars per month for your troubles and when your done they shot you in the head and throw in the ditch. I think that’s the type of friendship you need.

I was watching some neutral Spanish news channels last night, there are reports that Ukraine has lost between 70-80% of its professional military forces and now the bulk of Ukrainian forces are made up of conscripts and militias; so even if NATO were to send lots more sophisticated weapons systems, there would be not enough qualified people to operate them.

I think you are describing yourself mostly, resonant with incapable, maybe you are bed bound?

The leaders of the countries who are sending weapons to ukraine are responsible for the deaths of all the young ukrainian young men who were sent to the fronts instead of letting ukraine surrender which is the ultimate outcome.

All the destruction of these weapons is good news for Russian troops but also the out-of-control ‘private enterprise’ in the west. A gaggle of shysters who gauge their success in profits, and prefer not to think about the lives lost in Ukraine, over what is effectively a sales drive. Some countries in europe are sending their ‘clunkers’, so they may replace the old with the new.

And pray tell what will the angloZionaZi empire of shit use to “pay” for their new weapons? Where will they get the resources to build them? The more Natostan shit that Russia destroys the more that the EUSSR and its master USSA wil be denaZified. Ukraine is just the designated garbage dump and scrap yard for the real goal of defanging the angloZionaZi empire of shit proper and General Winter is still napping. The real fun begins in November.

Which is why all UK sham media are pushing their usual lies regarding the dire situation that bent politicians in Blighty have brought on themselves and the people. When the people of Blighty cannot heat their homes this winter, there will be trouble and our bent politicians want the people to think that they cannot do anything about it because it was all the fault of President Putin.

How much oil did U.K. import from “russia” you said?

Last edited 1 month ago by Work AT Home
-4
Reply

I have utmost sympathy for the (non-nazi) average Ukrainian soldier.

I have no sympathy for the sexual deviant Zelensky’s western sycophant regime.

what a ghey comment. Do you have posters on the wall home with Michael Jackson and George Michael?

It looks live a good week for the production of Ukrainian nazi worm food and a bad day for Nazis.

I think Russian intelligence is so good in Ukraine that when an AFU soldier talks out his ass the Russians know who did it, when and if it stinks.

Last week was a bad week for swastika wearing assholes in the AFU. A guess. 5000 dead, 10,000 plus wounded. Over a billion dollars in equipment destroyed, 3 billion in infrastructure destroyed and at least 5 hours of watching the clown of Kiev run his mouth. Will somebody put a NAZI dick down his throat and shut him up?