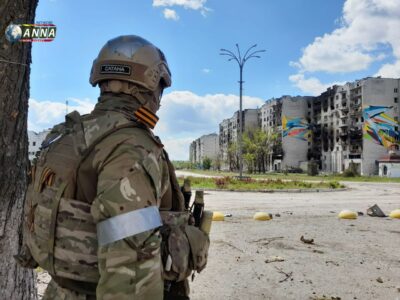 On the night of May 16-17, explosions were heard in the Petrovsky district of the city of Donetsk, and Russian air defense forces were working in the area. In total, there were about 8 explosions. This situation may be justified by the confident offensive of Russian troops on the Luhansk-Donetsk front line as a whole.

Therefore, it is worth noting some hot spots in eastern Ukraine. At the moment, fighting is going on for the control of Belogorovka and in the Severodonetsk region in the Luhansk People’s Republic. The Armed Forces of Ukraine (AFU) managed to blow up a bridge near Rubizhne leading to Severodonetsk. Russian troops are storming Toshkivka and Zolote and are actively mopping up Popasna. In Popasna, heavy casualties are observed on both sides.

To the north of Popasna, the Russians managed to advance beyond Komyshuvakha.

According to some reports from the spot, Russian troops entered the village of New-York, in the Donetsk People’s Republic. 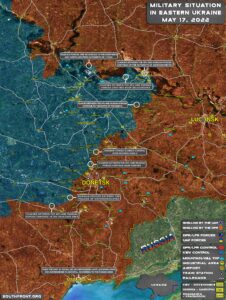 On May 16, the DPR units took control and moped up the village of Novoselovka-2 located to the north-east of Avdeevka. The fighting lasted about 3 days. About 2 platoons of the 25th brigade of the 110th regiment of the AFU were forced to leave their positions in the village. They reportedly attempted to flee at night in small groups. Many of them were destroyed by Russian fire.

To the south of Mariinka, Russian forces entered the village of Novomikhailovka

On the morning of May 16, the territory of explosions in Donetsk expanded. In addition to the Petrovsky district, strikes hit the Kuybyshevsky district. The Northern, Oktyabrsky districts, the area of Ploshadka, Hrabari and Gornyak were under threat.

In addition to military facilities, the war is affecting civilian facilities. Donetsk school №107 has once again become a target for the AFU. Alexei Kulemzin, head of the Donetsk administration, shared a video showing the scale of the destruction of the school.

An official representative of the DPR published a report on combat operations over the past 24 hours (from May 15 to 16). The report stated that during the day 36 Ukrainian soldiers, 4 mortars of 122 calibers, 2 armored vehicles, and 3 trucks of the AFU were destroyed. 1 BMP and 2 armored vehicles were captured.

Now the dominance of the Russian Federation in the area of Donetsk can be traced. Russian troops are actively storming local settlements where the AFU soldiers are entrenched. However, the Russian positions in this territory are not secured, so it is difficult to say who will seize the initiative in the nearest future.

A “before and after” map would have been nice. For the last week, two weeks and month, two months.

That would show the real advances really well.

Cash making job for evey american to earn and work online. earns more than $15k every month with this home based job.bvg i made $18521 from this job in my spare time afte my college. easy to do job and its regular income are awesome. no skills needed to do this job all you need to know is how to copy and paste stuff online. Open This Website >>>>>>>>>> 𝑾𝒘𝒘.𝑪𝑨𝑺𝑯𝑨𝑷𝑷1.𝑪𝒐𝒎

There are no real advances, that’s why you don’t get to see any maps.

You can see that by looking at all maps on SF since day 1 of this invasion. Just enter the page of the most recent map and then manually edit the link with the date you want. Some days SF didn’t make an updated map, so just chose the day next to that.

You can also see the progress in the Wikipedia interactive map. With advances and retreats, and the respective dates.

And these guys even do it daily, with a very, VERY, complete and detailed google map where you can select any day and compare it with any other day/period you want:

The USA is the creator of terrorism

What happened in Azovstal? The captured Azovians say the Deputy commander of the Azov regiment “Kalina” is a formal commander, did not fight at all, just a talking mouth. The APU, on the other hand, is beaten in a pre-trial detention center where some of the prisoners of Azov are kept. What are these people fighting for? so that in case of weakness, you can immediately stick a knife in your back. The command is drug addicts and NATO members who have always considered Slavs not the first class. They rot in the fields, rot in the basements, and when they come out and give up, because no one needs them, bombs are poured on them. in a word DEMOCRACY

You are right, it is not clear what they are fighting for, there are only one creatures with a similar habit in nature, these are ants, they do not escape from the fire, they follow the path into the fire, fulfilling the “supreme order”. And to confirm the words, there is always an updated resource with corpses and raised paws of the APU (look for Ukrainians by the forelock) https://t.me/s/chub_detection

Erik
Reply to  The USA is the creator of terrorism

It is clear, there is a global plan to reduce the population and bring in an endless stream of migrants (Africans) And they are already changing history books, paintings and statues… So “they” can not afford to let people or a whole country alive to tell those new Americans and Europeans what happend before them

The general overview is that the Putin cockroaches are advancing backwards. The shitty Russian tanks are moving on reverse. And Ukranian artillery is now matching Russia’s artillery. That’s all they needed to turn things around and finally be able to run these parasites out of the country.

Vlad the imposter
Reply to  Muhammad your Prophet

Ukrainian guns weren’t ‘matching” Russian artillery before the arrival of US made guns … despite them being for the most part exactly the same weapons the Russians were using …. and you believe this is going to turn the war in Ukraines favor.

These weapons are reported to have arrived without fire control and gps module that makes them and different from a WW2 vintage gun. These are towed artillery. USA use these weapons under full air superiority and protect them from counter battery fire by airlifting them around the battlefield with heavy lift helicopters.

Can Ukraine do that? If not they’re good for about ten rounds at best before Russian counter battery / air strikes get them.

Muhammad your Prophet
Reply to  Vlad the imposter

You’re right about that. Ukranians were obliterating Russian weapons in every other aspect other than Russia’s shitty artillery. Thanks for the clarification.

In your dreams you goat shagging pedo follower !

Good News, once the trench systems of Avdveeka front are emptieed, things should pick up speed, 9 yrs of fixed entrenchment fortifications are not easy to bypass there. cyborgs dug in hard. but once the ship gets leaky, the rats will swim for shore.

“the village of New-York” ?? why the f*ck some village in Donbass is called New York??

it’s not a mistake it really is New York 😃

Why is the russian air force not operating more actively?

Vlad the imposter
Reply to  Fini

Just a guess here but Ukraine has soviet era SAMS like Buk and S-300. Even though they are large vehicles they are electronically invisible until they turn their targeting radars are turned on. Russia got most of them but there are still some lurking out there and Ukraine is a big country with lots of places to hide.

Unlike what the Russians have these are old weapons but still very dangerous none the less. Makes you appreciate just how effective the Russian A2/AD is. I’ve noticed that Russians SU-25’s are always flying at the nape of the earth to stay out of view of both SAMs and manpads when they attack.

This is real modern warfare not a circle jerk turkey shoot in an open desert against kids in flip flops armed with their grandads AK-47.

Russia has no need to use aircraft in set-piece battles against the UKIE prepared defence lines. Russia has long been using artillery to degrade their enemies and artillery is the God of War.

The thousands of bunker buster penetrator munitions that ‘encouraged’ the surrender of AZOV in Avostal, will I hope, be employed to demolish the long prepared UKIE bunkers along the DPR and Lugansk front lines.

With that mammoth resources, ru army cannot advanced against a much weaker force. It’s a shame.

Ukraine will fight until the last man – surrenders…

“About 2 platoons of the 25th brigade of the 110th regiment of the AFU were forced to leave their positions in the village. ” Good example how small these combat units in Donbas actually are. As I have mentioned before in modern warfare there are likely around 10-15 soldiers per battlezone km2. So unlike Ukies and Rooskies are claiming they can’t inflict really “heavy losses” to enemy because the numbers of soldiers of armies are pretty low.

Ukrainians are doing a good job at neutralizing the Russian parasites with howitzers and javelins.The front line is also called the land of the flying turrets.

Why would anyone put “Satan” on his helmet?

The village of New York? Some translation error, surely.