On October 1, the Syrian Arab Army (SAA) backed by the Palestine Liberation Army (PLA) launched a new phase of its military operation on the Syrian-Jordanian border in Damascus and al-Suwayda governorates. The aim of the new phase was to secure the entire border, according to Syrian pro-government sources.

On the first day of the new phase the SAA captured Rajm Bark village and Najjar hill in the Damascus desert to secure the rear of its units. Rajm Bark village is located near the Handarat Camp that was captured in the last phase on September 11.

Pro-movement sources reported that the large advance of the SAA on the Syrian-Jordanian border forced the US-backed Free Syrian Army (FSA) to withdrew from large areas of the Damascus desert between Umm Udhun and Zuluf reserve. However, no official source has confirmed these claims so far.

From its side, the US-backed FSA groups as usual showed no real resistance or effective defense to the SAA advance. The two biggest US backed FSA groups Jaysh Usud al-Sharqiya and Ahmad al-Abdo Forces have not even reported any military activity of their fighters since September 21. Syrian opposition sources even claimed on September 28 that the both FSA group withdrew from the border and Damascus desert towards Rukban refugee camp on the Syrian-Jordanian border.

However on October 4, Liwa Shuhada al-Qaryatayn claimed that its fighters repelled an attack of the SAA towards al-Tanaf town on the Damascus-Baghdad highway. The US-led coalition had claimed before that it suspended its support for Liwa Shuhada al-Qaryatayn, however it looks like the group is still highly active in al-Tanaf area under the US-led coalition protection.

Also on October 4, opposition sources claimed that the US-backed FSA groups backed by the US-led coalition are preparing to launch a counter-attack against the SAA. However, these claims are likely false as the SAA is still more than 55km away from al-Tanaf area, and because the US had ordered FSA groups to stop fighting SAA since early September.

The final target of the second phase of the SAA offensive is likely the garrison number 211 on the Jordanian border. It is the last border point with Jordan in Damascus governorate. The Garrison is located 55km south of al-Tanaf town. Thus, it could be the finish line for the SAA and its allies as the US-led collation announced before that it don’t want the SAA closer than 55km to its base in al-Tanaf.

What about Deir Ezzor?
Omar oilfields?
Wtf is Assad is doing?
Destroy those SDF invaders!
They are no different than ISIS.
Just because they don’t shout Allahu Akbar before killing a infidel doesn’t mean they are any different than ISIS.
They are foreign funded mercenaries who’ve been caught slaughtering Assyrian Christians in Syria, grabbing their land, throwing them out of their homes, etc
Adding to that, they also want to grab as much Syrian land and oil as they can and then sell that oil to yankees low of cost.
They wanna loot Syria’s resources.
Why is Assad allowing them to steal Syria’s natural resources?
Is it because they fight ISIS?
Well Free Jihadist Army (FSA) and Jabhat al Nusra (Al Qaeda) also fight ISIS, but does that mean their goals are any different?
No!
All these factions want to take over Syria and are fighting for power.
They are no different than invaders
Destroy them!
Syria belongs to Syrians.
SAA are Syrians.
They got their own Syrian family to feed after the war is over.
They also want to go back to their normal life.
Some of their families (in Damascus and Aleppo) are waiting for their son/husband to return safely.
Don’t take away Syrian people’s future!

I am real happy for the PLA to have finally conquered a liece of land.

Now they can have an extra homeland.

You are talking about the victorious return to Palestine I assume.
http://sana.sy/en/?p=115120

Seems the Jordanian based and southern front FSA militants didn’t get extensive training on using their ATGM’s by their various NATO handlers in Jordan – here is classic image of AT missile soaring right over a Syrian state aligned Palestinian Liberation Army unit’s tank, recently operating near Jordanian border. 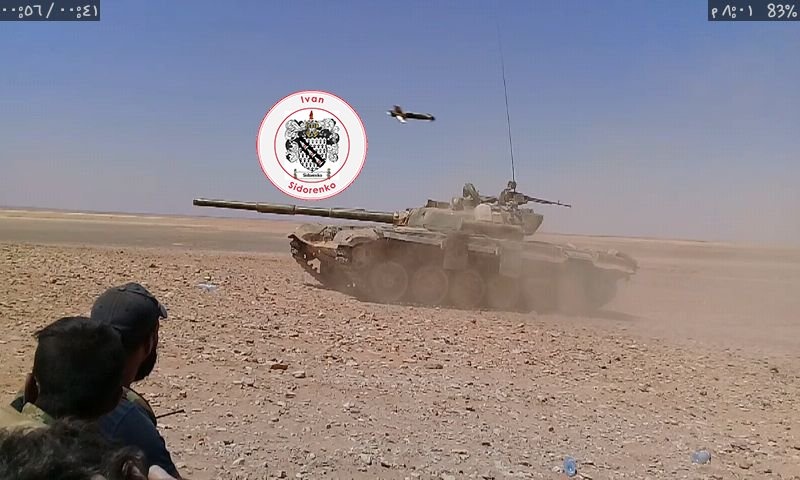