Since November 8, the Syrian army’s Tiger Forces and the Destert Hawks Brigade have made a series of attacks on the Minyan area. By now, according to pro-government sources, the government forces have liberated about 90% of the area from Jabhat Fatah al-Sham. No photo or video evidence are now aviable from the area. However, militant sources indicate that the moral of Jabhat Fatah al-Sham-led forces is low.

Clashes were also repoted in the neighborhood of al-Assad where the Syrian army and Hezbollah were attacking the militants in the central part of neighborhood. The government forces deployed in the Hikma School area are also posing a threat to Jaish al-Fatah in al-Assad.

The map below depicts the current military situation in western Aleppo and the expected plan of military operations by the pro-government forces in the area. 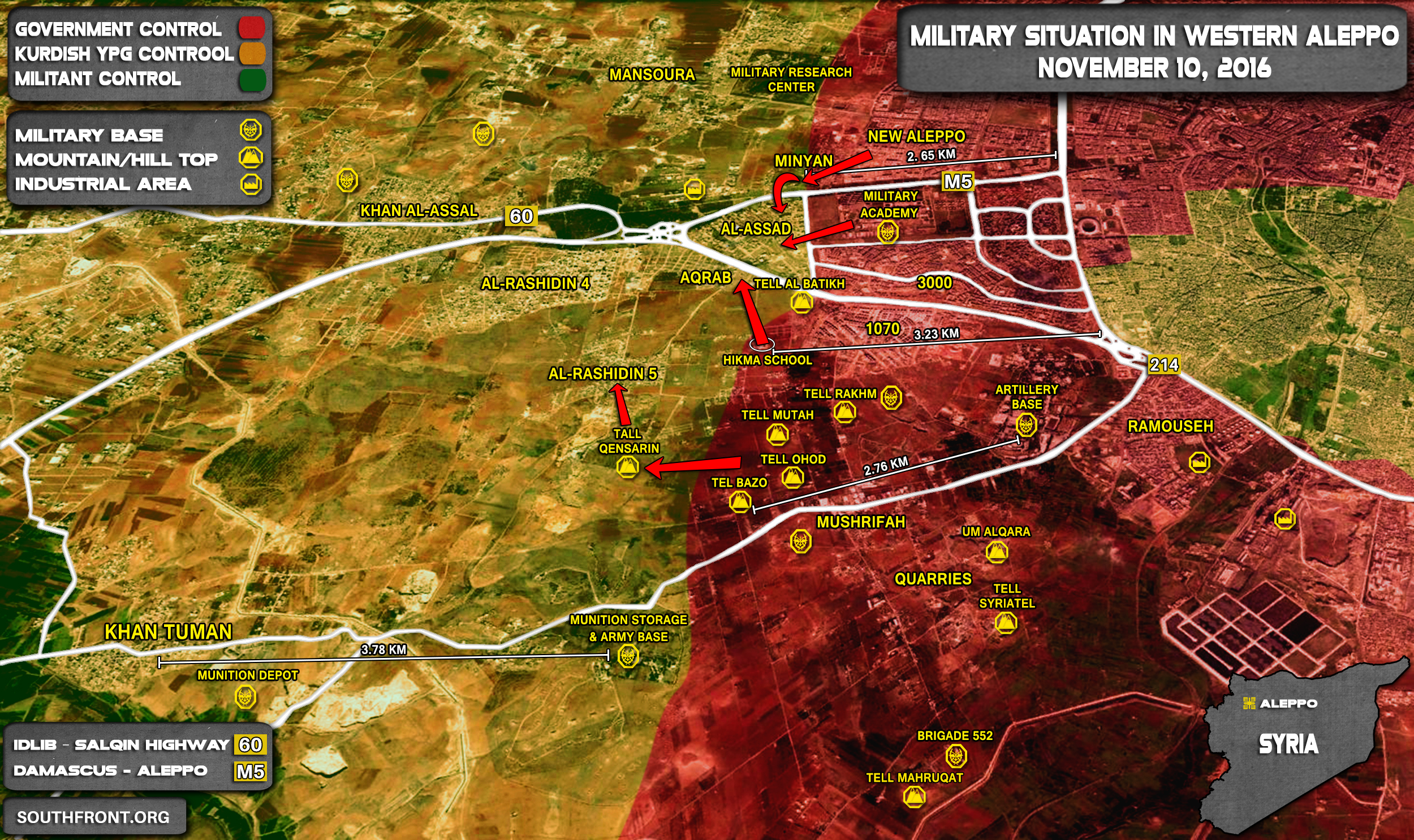 They should keep on pushing the Jihadists back west into Idlib and not waste time on taking East Aleppo. Just like when the Red Army pushed the Wehrmacht so far back in the winter of 1942 that there was no chance in hell that the besieged 6th Army in Stalingrad could be relieved. Let alone receive any supplies. It will also have the advantage that while airstrikes on East Aleppo can be exploited by the Jihadists on the news, air strikes on little towns and hill tops make for less glamorous news. Let time and hunger do the work. Hell, you could even allow UN aid convoys in, depriving the West of a powerful propaganda argument, after all Jihadists bottled up in East Aleppo, even well fed ones, are not going anywhere.

The German 6th army was trapped in Stalingrad because their flanks protected by Romanian, Hungarian and other satellite armies were easily over run by Russian armored pincer movements. The Russians had to deal with the trapped German through March of 43, albeit Paulus and most of his army surrendered earlier. Conditions in the winter of 1942 in Stalingrad were a lot harsher than current day conditions in Aleppo.

The jihadis trapped in Aleppo are prensetly rendered useless, one primary concern with pushing into Idlib, is the possible weakening of the encirclement force around Aleppo, let the jihadis trying to break into south west Aleppo bleed more, until their forces can be overrun easily without any danger of an unexpected counterattack.

There is no sea flanking Aleppo, SAA needs troops to keep the encirclement viable. At the battle you refer to, the Russians had significant numerical advantage, and Hitler by meddling with his generals commanding to hold their positions instead of falling back resulted in the German groups getting cut off. It was the same story with Stalingrad, Hitler’s stubborn insistence not to withdraw led to the encirclement of the German 6th army. The generals always wanted to withdraw and form a flexible defense line, reducing the length of their front line, and have the opportunity to counterattack when opportunity presented itself.

I agree and apparently so do the Syrians and Russians. Little movement in east Aleppo while currently the Russians destroy ammo dumps, tanks, etc. in Idlib and other areas which have been used to resupply the terrorists in SW Aleppo. Once cut off from resupplies, they can better be eliminated. All with little potential for western propaganda.

The main reduction effort by Rokossovsky was not even started until mid-January 43, giving the situation in the pocket time to degrade in terms of morale and material.

The situation in the pocket was degraded by Hitler thinking he could establish an air bridge to Stalingrad and supply the army with necessary supplies to keep fighting. The German army in Stalingrad needed daily supplies of 700 tons, while the Luftwaffe was able to deliver an average of 150 tons. Also uncertainty about what to do, Hitler’s stubborn orders to dig in, contrary to the reality of attempting to break out and link with Von Mainstein armor which was 30 miles from Stalingrad contributed to the eventual doom. The Germans were cold, did not have food, ammo or fuel in Jan1943.

The local population being starved to death will make good propaganda. Also you need troops to prevent break outs.

Aha, so they are using the moment when Al Qaida is down to kick them in their teeth with a good offensive. who knows where it’ll stop. meanwhile they can in peace (LOL) strangulate Aleppo. i mean, it’s not like terrorists are shitting bullets and food… YPG is kind of watching their back against too much Turkey, a nice bussiness relationship, and it’s all good.

Good comments – the taking of east Aleppo is not as important or time critical as the destruction of the supply lines and terrorist bases right across Iblib governate. So far Turkey has been able to re-inforce and resupply weapons, munitions, a never ending flow of foreign jihadi mercenaries and killers to the Islamic groups in Iblib – this explains how they were able to mount and sustain their attacks SW and W Aleppo for so long. This war can only be won by fully eliminating the entire terrorist networks – garrisons, supply dumps, workshops, transport hubs, weapons factories everywhere and securing the border crossings – for too long these jihadis have been secure in Iblib – now their hour has struck – time for some hard sustained targetting from RuAF/SAF. Go to it !