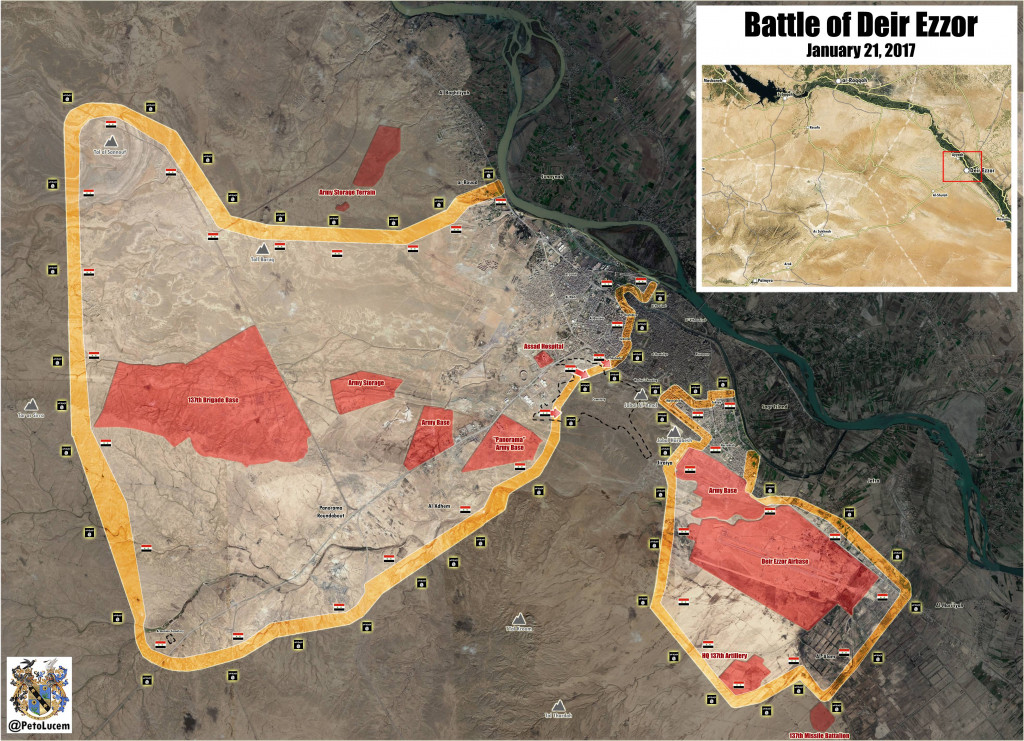 A military situation in the Syrian city of Deir Ezzor is complicated.

The Syrian army, backed up by the Russian Aerospace Forces, have successfully prevented ISIS attacks aimed to further tighten the siege of the Dier Ezzor Airport. Nonetheless, government forces have been unable to develop a momentum and to link up the airbase with the area of the al-Assad Hospital via a road throughout the Workers housing area.

The army will need retake the Harabesh Mounitain controlled by IISIS before government troops will have a real opportunity to secure Mayssalon and Jiraya. While this is not done, government efforts to solve the ongoing tactical crisis will not lead to a success.

Another problem of government forces is a lack of manpower. According to local sources, the army does not have enough troops to conduct a wide-scale offensive operation against ISIS in the aforementioned areas and to defend crucial defense points at the 137th Brigade Base, the Panorama Roundabout and the HQ 137th Artillery, simultaneously.

While ISIS has an advantage in the manpower, the terrorist group will continue to put pressure on government forces in Deir Ezzor. This problem can be solved by offensive operations against ISIS in central Syria which can draw the terrorist group attention.

Meanwhile, various pro-government sources report that ISIS has lost up to 500 fighters and about 10 units of miltiary equipment in the recent clashes in Deir Ezzor. However, this number looks overstated.

The manpower issue can be partially offset by deploying more heavy auto weapons like ZU23 and KPV14.5mm guns. Both systems are light enough to be hauled into the airfield zone by helicopter. They could also do with some light multiple rocket systems of the 107mm type if it’s in the Syrian inventory. Otherwise more mortars and recoilless rifles should be brought in. Between the city and the airfield a firebase needs to be established. It will provide cover for opening up supply routes and also as a staging point for breaking the encirclement in both directions. The Syrian Army needs to improve tactics and use it’s superiority in artillery , air cover and automatic weapons to offset the manpower issue.

Airport is under firecontrol of Daesh. However SAA did deliver more troops and light supplies by airdrop into western pocket of Deir Azzur earlier this week.

That’s exactly why they need to bring in more firepower. Get the men on the ground to mark the Isis positions and subject them to all out tactical air strikes whilst moving in more artillery and ammunition via helicopter. Once fire superiority is regained from the airport push out and establish a firebase halfway between the city and airport. The positions on the high ground must be dominated as well. However I doubt the Syrians have enough transport helicopters left to enable large scale air assaults and resupply. Time for the Russians to step in , however I don’t think they want to expose their pilots to more risk by flying resupply and assault transports in heavy ground fire. Even if they gave more helicopters to the Syrians I doubt there are enough pilots. Also Syrian tactical thinking seems lacking in the use of terrain ,automatic weapons , mortars and artillery to control enemy movement and inflict casualties.

I am puzzled why the Syrian army isn’t investing more resources here. It seems that they are blinded by there previous experiences where isolated and completely surrounded army bases held out for years. What they forget is that those bases had no strategic importance for either side. The rebels reasoned that there was no need to lose a lot of men in a hot battle to conquer them when some time later Damascus would fall and the army would have no alternative but to surrender.

Deir Ezzor on the other is hand is of major strategic importance. It is a thorn in the heart of what remains of ISIS territory. The Syrian army already once almost linked the city with Palmyra. Once conquered the city would safe for ISIS for quite some time as in all directions all the land is under ISIS control for many kilometers. Not to mention that ISIS could use some success to keep morals high.

Deir Ezzor is just not the biggest priority to the SAA. Too much priorities elsewhere, not enough manpower to tackle them all. The only thing that can really save this city if it were relieved, similarly like the Kuweires airbase. But the enclave is just too far from the SAA main lines, and any offensive would be on a vulnerable narrow front. And lets be honest, the SAA’s offensive capabilities leave much to be desired about. Slow and methodical at best. Slow and wasteful at worst. Compare that to the Kurds or Jihadists who seem capable of taking large swaths of land in relatively short amounts of time that would take the SAA ages to conquer. I can only conclude that a few crack forces like the Tiger Forces aside, most SAA units are not as well motivated and led as the YPG/SDF. And thus the SAA military planners have to plan accordingly.

There was talk last year of the Iraqi Popular Mobilization Units moving into Syria. If any chance of relief for Deir Ezzor is to come, it’s probably going to come from either that or the Rojava Kurds.

One of the tactical problems of the SAA is that when they advance, they want to do it rapidly, without securing their flanks and without digging in.

This make them very vulnarable to lightning counterattacks, which IS is very good at.

The advance on Tabqa by SAA last summer was an example of this. At the end overextended in a small long non secured corridor, they were destroyed by IS counterattacks.

I would not be surprised to learn that for this reason there are no relief collums on their way to DeirezZor.

But this ought to be their highest priority! Instead, they are wasting their time and resources at al-Bab!

Find it difficult to believe SAA does not see the strategic value of this city , not to speak of its oil revenue . With the US backing the Kurds in Raqqa , if they via ISIS take Deir Azzor , they have their “Sunnistan”, and Syria divided . I find it even more puzzling that Russia does not see this , and act on it . You can not be half-in a war . It is “All In” , or not at all . An “exercise” of Russian special forces could take the whole area in 48 hours , an be back home . “Not to mention that SAA could use some success to keep moral high” It would certainly deliver the right message to Turkey during the “talks” in Kazakastan .

Ronald, you are absolutely ly correct.

More troops should be brought in via helicopters. special forces, particularly snipers and ground operators/coordinators for air-strikes. …

The US could make up for the terrible blunder they did in mid-September 2016 here. It will plague them for a long time unless they redeem it.

Blunder? Not likely. Premeditated back-stabbing attack is more like it. They did pay a price, they just never admitted it. To expect a complete turn about position vis a vis Syria would be very optimistic…Trump or no Trump…when I actually see it, then I will believe it.

It was deliberate – firstly, it was Pentagon very publicly trashing the State Department of Kerry that they refused to accept US-Russian ceasefire directives from. Secondly, USAF had never been anywhere near Dier Ezzor before in five years. ISIS controls hundreds of miles surrounding the central town and airport where SAA and civilians are under siege – so for USAF to accurately bomb the SAA’s pivotal mountain-top/ high ground defenses, right in front of the town took some special targeting. It was giant message from Pentagon to all parties – that they were not accountable to Kerry and would not coordinate with Russia in Syria – under any circumstances – and that Assad remained their real target. Wake up a little.

Well, if it was a deliberate strike at the SAA … Trump has to live with it or deal with it. If he wants to deal with it that he has to put order in the Pentagon, CIA, diplomats, etc. first. Second, there has to be consistent and honest compensations to the Syrians – multiple possibilities, multiple challenges, multiple talks.

Trump is already in heavy public conflict with ex CIA director John Brennan – who he basically just fired – and who ran CIA at time of USAF air assault on SAA. Brennan is suspected of being behind the leak of Trump dodgy dossier and may be subject to some scrutiny by Trump administration in future (Brennan is preemptively publicly striking out at Trump to try and politically protect himself in future). This conflict actually makes it easier for Trump to patch up things with Russians over Syria if interested – but doesn’t mean rogue sectors of CIA will give up their ambitions.

Stalingrad was the turning point in worlds war 2, the Russians knew its importance to hold it. The poured men and resources at it.

Paratroopers on the mountains, job done.

Paratroopers are really a military mindset now, less an active tactical air borne asset. They represent long standing elite infantry units, but since advent of helicopters in 1950’s, the actually military value of delivering large numbers of personnel by para-drops is effectively sidelined.

Sure they expanding, but point is, they are expanding elite infantry, soldiers have to earn it, and will remain bonded long after service, that is its value now, rather than offensive tactical parachute delivery.

Deir Ezzor should be a top priority, since it´s one of the government´s last strongholds in Eastern Syria. I am really wondering why nothing has been done in days to prevent this entirely forseeable situation. Tactical incompetence and a lack of flexibility seems to be a major feature of Syrias old-school army. Many critical articles have already addressed the issue. Both the army and government as such in Syria need some major reforms, if long-term stability is the goal.

There are no civilians there, use chemical weapons.