The Syrian Ministry of of National Reconciliation has offered militant groups operating in Aleppo city 3 options:

This suggestion by the government clearly indicates that the Syrian military foresees heavy clashes in eastern Aleppo and seeks to avoid major civilian casualties. Unfortunately, such a move looks unlikely acceptable for the so-called “opposition” because Western and Middle Eastern states, sponsors of militant groups, are not interested in cessation of hostilities in the “capital of revolution”. 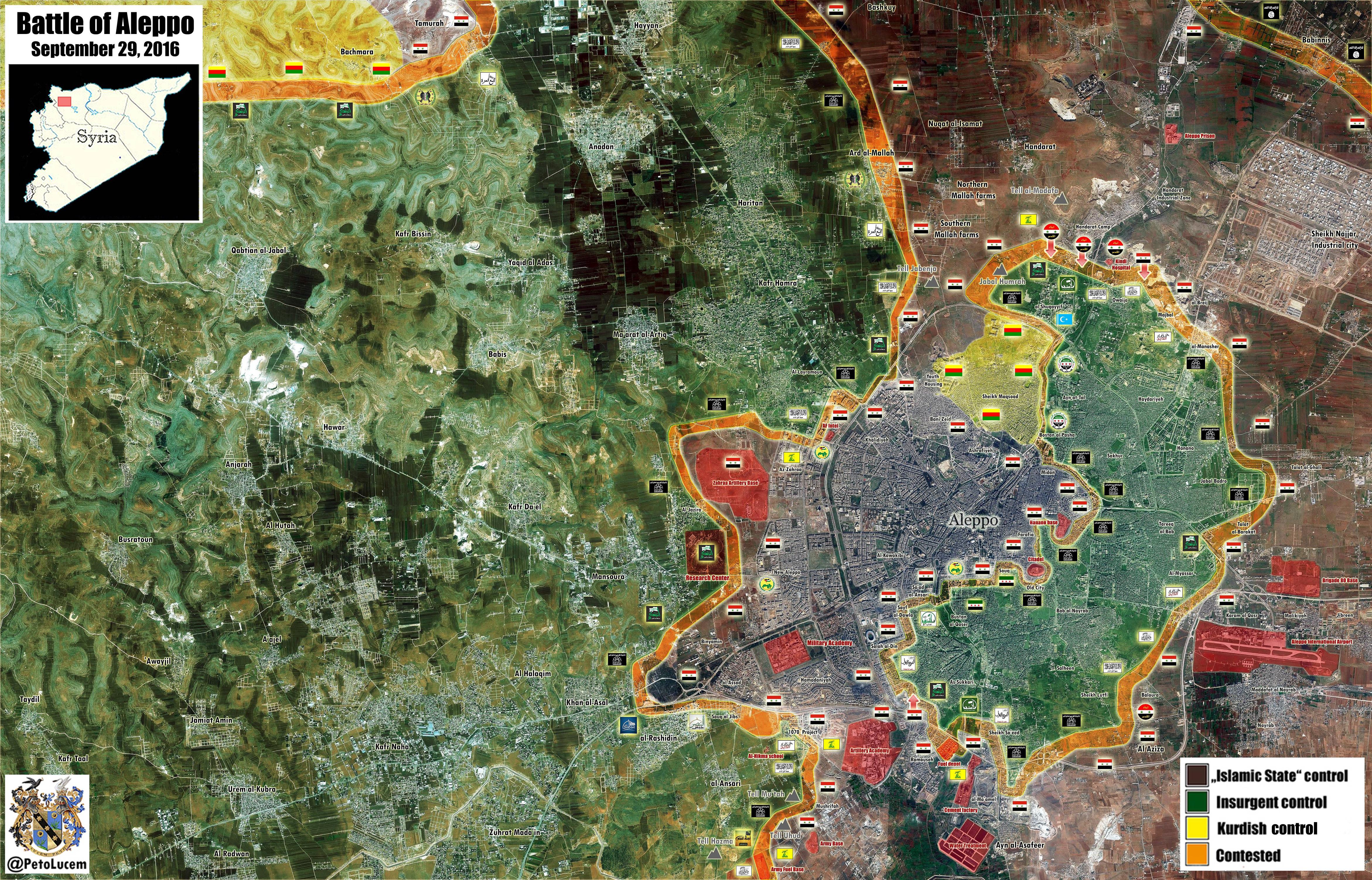 On September 29, Palestinian pro-Syrian government militia from the Al-Quds brigade and the Syrian army recaptured the strategic area of Handarat refugee camp north of Aleppo city. After this success, the loyalists took control of nearby areas of Kindi Hospital and Shuqayf-Jandoul and the al-Kindi hill. According to initial reports, the pro-government forces were able to secure the recent gains. The recently liberated areas had been controlled by the Free Syrian Army (FSA) and Jabhat Fatah al-Sham (formerly Jabhat al-Nusra).

In late 2013, when the FSA and al-Nusra captured Kindi Hospital, the terrorists executed a number of Syrian servicemen in the area. 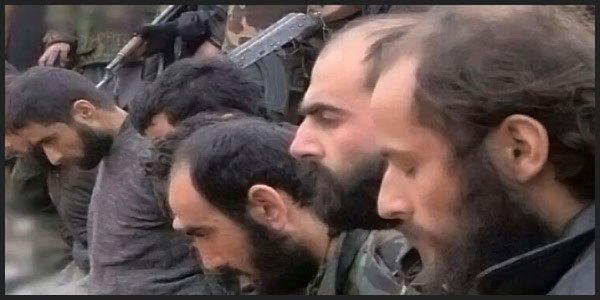 After the lost of Handarat, miltant units located in Rahbat Shoqayf, Shoqayf and Awijafh became vulnerable for attacks of the pro-government forces. Now, the Syrian army and its allies most likely will continue advances, moving towards Awijafh and the strategic hill near the area. If this strategic hill is captured, the government forces will able to set fire control of nearby areas, reducing the militants’ ability to operate in northern Aleppo, significantly. 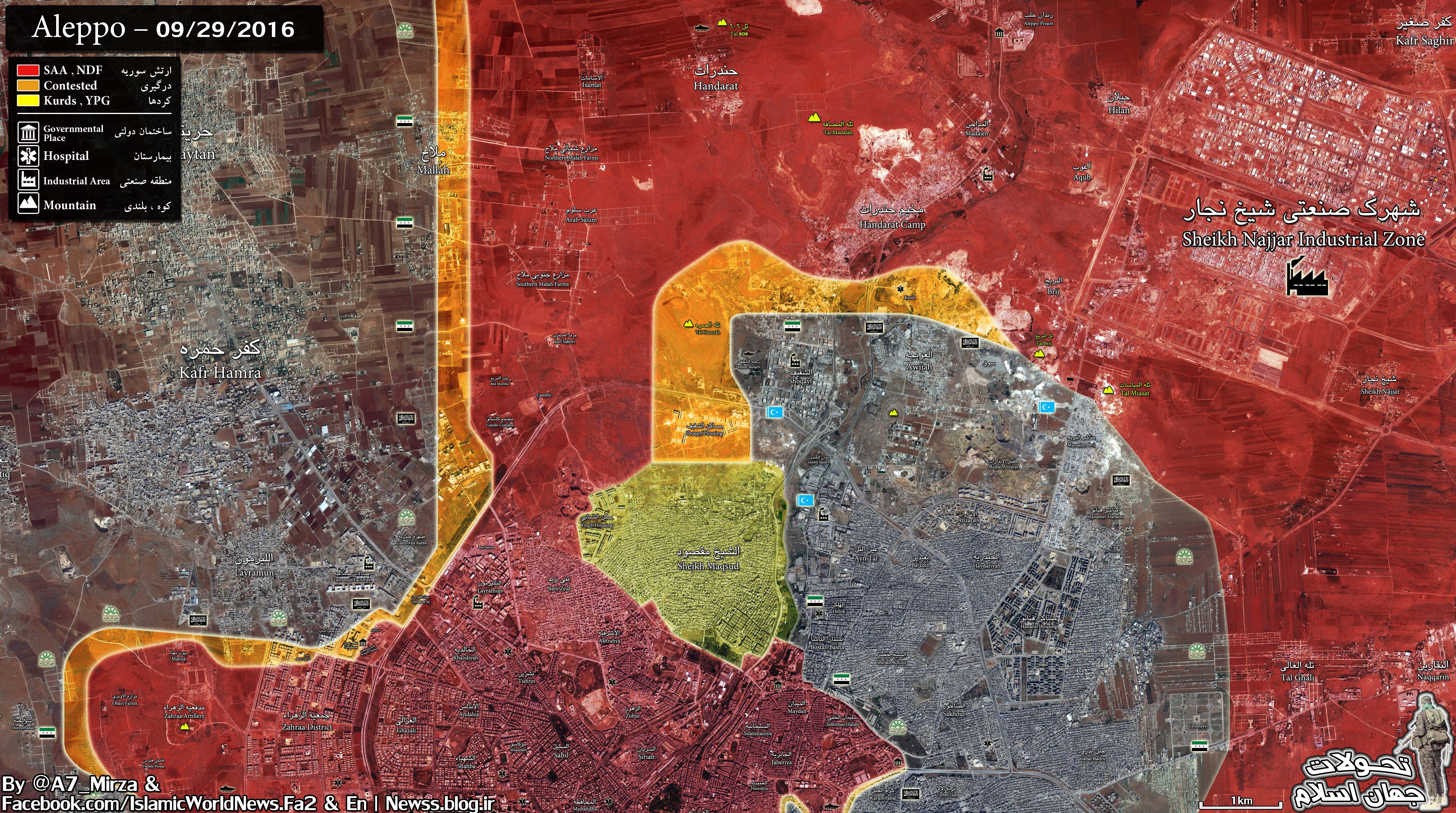 The “rebels” (the foreign fighters, western backed terrorist army) won’t let civilians leave East Aleppo because they are using them as human shields…..those that they don’t murder outright as an ‘example’ or by in indiscriminant shelling.

russia should bring in the 1 toners and blast them to hell or even better foab.

According the LA times (September 29 2016), the Russians are currently using bunker-busting bombs in easterner Aleppo. They are doing this to eliminate deeply buried arms depots and command and control sites belonging to the rebels.

In those bunkers is where the U.S/ISRAEL/NATO/SAUDI ARABIA/TURKEY/QATAR military officers HIDE, they are WIPE OUT, that is why Kerry and the U.S WAR MONGERS are screaming and in PANIC MODE, their boys have been wipe out.

they should just surrender then bombs will stop falling.

Please show km Scale on all map updates. Thanks