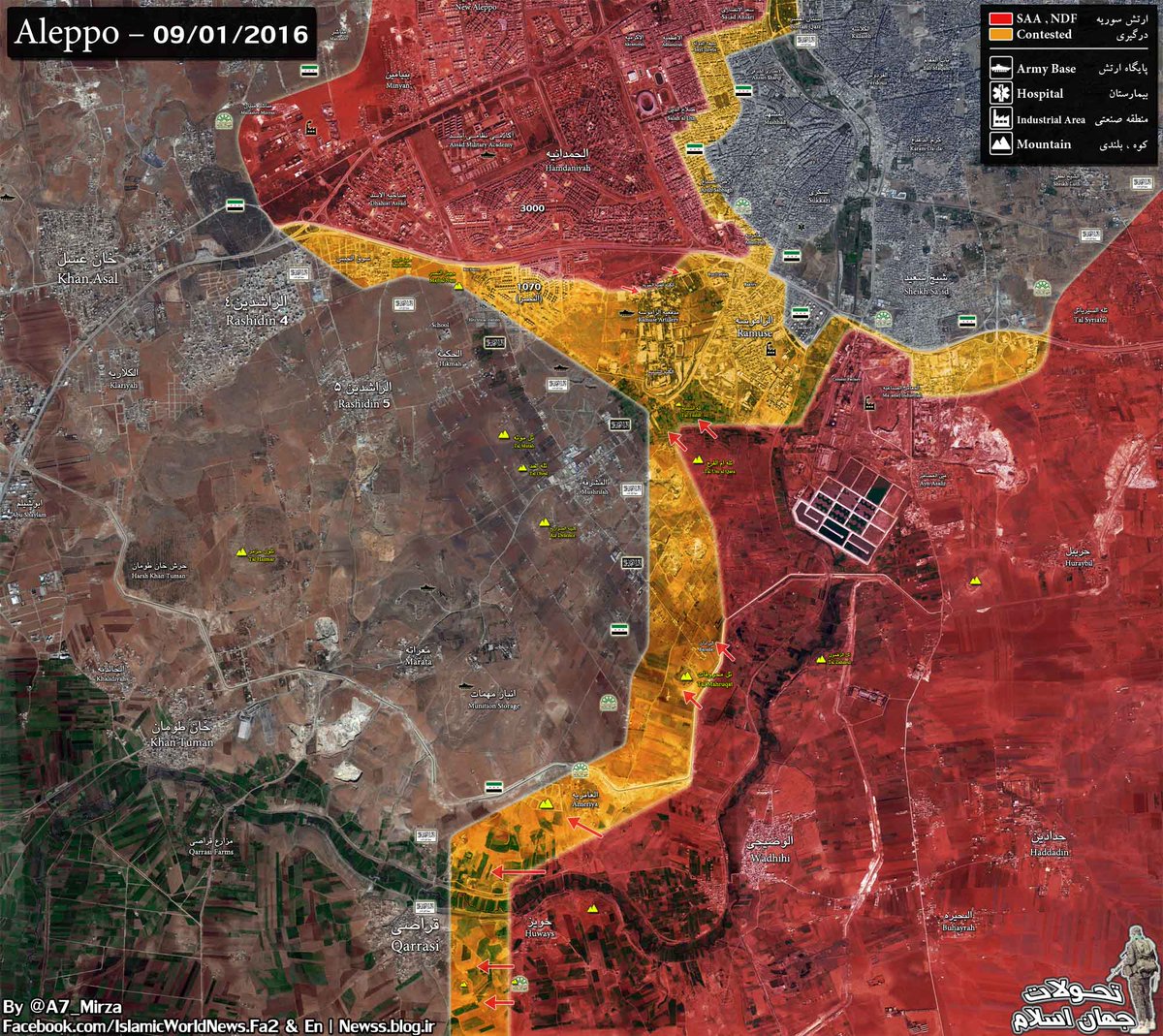 On September 1, the Syrian army and its allies continued to develop momentum in southwestern Aleppo. Since yesterday, the pro-government forces have entrenched in the recently captured Technical College at the Ramouseh Artillery Base and now are preparing for further advances in the area.

Russian and Syrian warplanes and the Syrian army’s artillery and battle tanks have been shelling the area in order to neutralize defenses of Jaish al-Fatah militants in the area. Experts suggest that the final storm of the central part of artillery base can be expected in 1-2 days. These attacks are synchronized with the ongoing advance on the Ramouseh-Khan Tuman road from the Tal Al Sanoubrat hill in southern Aleppo. Success of any of these advances will lead to restoration of physical encirclement of the militants in eastern Aleppo.

Separately, the Syrian army and Hezbollah have launched an advance on the al-Shurfah quarries from their positions at the hills of Um al-Qara’ and Mahrouqat. Reports say that the pro-government forces have not been able to enter the al-Shurfah quarries. Clashes are ongoing in the ara. If the loyalists are able to set control of al-Shurfah and intrench there, they will strengthen significantly their positions along the Khan Tuman-Ramouseh road.

Meanwhile, Russian warplanes have delivered massive air strikes on Jaish al-Fatah targets in the province of Idlib, destroying militant manpower and military equipment at the villages of Taftanaz, Binnish, Sarmeen, Ariha, Saraqib, and Jisr Al-Shughour and along the road from Saraqib to Aleppo city. Local sources report that at least 2 militant convoys have been destroyed and some 50 militants killed by the air strikes. The Russian Aerospace Forces deliver air strikes on militant targets in Idlib on a constant basis, preventing Jaish al-Fatah from sending reinforcements and supplies to southwestern Aleppo.

Strategically, Jaish al-Fatah’s position in southwestern Aleppo looks bad. However, all will depend on the Syrian army’s capacity to develop the gained tactical success in the area.

This looks like a good position to hold and further attack from, assuming it it’s lost.