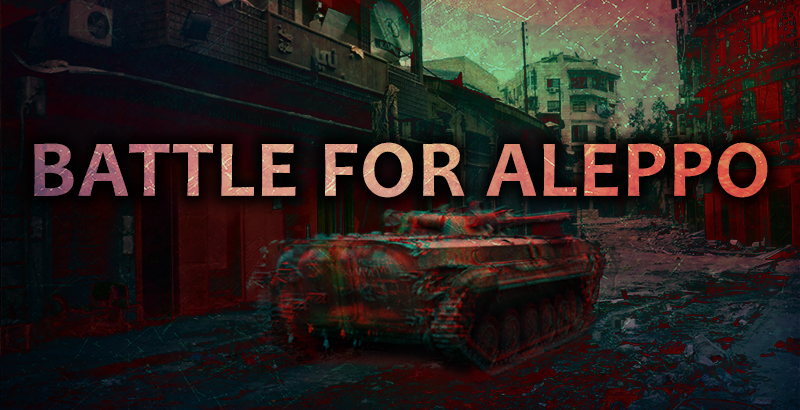 Russian and Syrian military scheduled a humanitarian pause in Aleppo city for Thursday. The pause will be aimed to allow passage to civilians and the withdrawal of militants through 8 corridros:

Russia’s Defense Minister, Sergey Shoigu, has also announced that the Russian Aerospace Forces and the Syrian Arab Air Force are ceasing airstrikes against militants in Aleppo city for 48 hours, ahead of the humanitarian pause that will start on October 20.

The Russian envoy to the UN said that Al-Nusra Front militants must take a chance to leave the city voluntarily or they will be annihilated. According to the UK’s Foreign Office, from 10,000 to 12,000 of the so-called ‘moderate rebels’ remain in Aleppo.

Meanwhile, the Syrian army and Hezbollah seized about 90% of the 1070 Apartment Project and the whole area of Inzarat. Clashes are ongoing in Hanano, Bastan-Basha, Sheikh-Said, Al-Ameria and Salah-ad-Din. 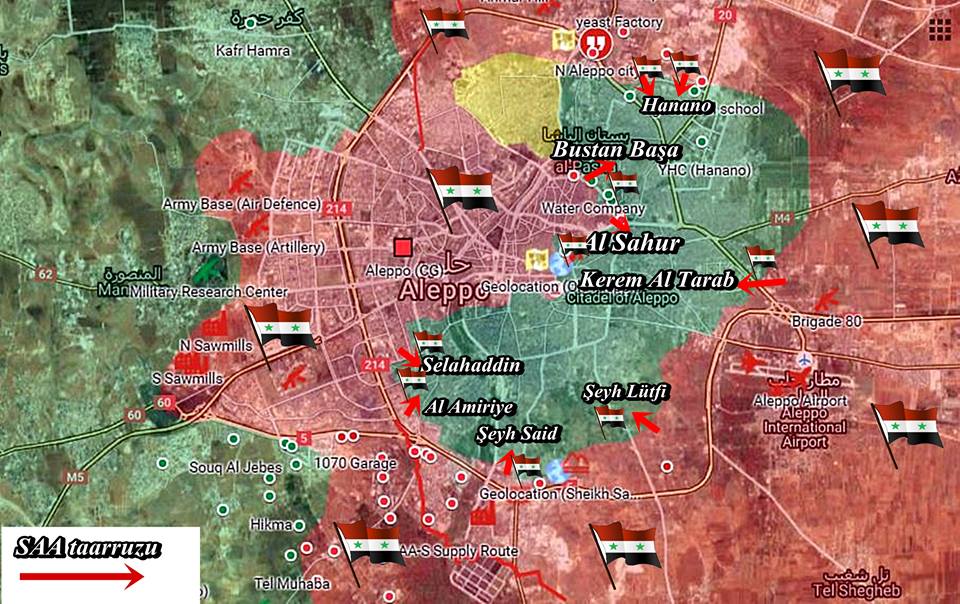 The advance launched by pro-government forces west of the Aleppo International Airport has not achieved any significant success. Nonetheless, the attack played an important role in putting pressure on Jaish al-Fatah units deployed in central Aleppo.

Ahead the humanitarian pause, the Syrian government forces are avoiding to launch significant offensive operations in the city. Full-scale clashes will be resumed after the pause.

Enough with the pause nonsense.It is just time for terrorists to regroup.Get the job done and stop care about what the western hypocrites say…..

The AQ rats probably have about 40K human shields, not the usually quoted 275K.

40 thousand at the upper limit.

Where is this British 12 000 moderate rebels if the terrorist are publically executing fleeing civilians.

So if Al Nusra 2.0 leaves then the SAA won’t be allowed to take western Aleppo because those are the ‘moderates’, how will anyone be able to verify that Nusra 2.0 actually left the city instead of some token force, what if the ‘moderates’ shell the citizens in the govt part of Aleppo again?

This looks like a bad deal. They should have done just the opposite and insisted on allowing the ‘moderates’ to leave, or the entire brigade of militants to leave with the understanding that whoever is left will be targeted by the SAA. This is the normal arrangement for previous withdrawals, such as when the Kurds took Manbij.

Someone remind me – how many humanitarian pauses were there during the battle for Berlin? The exact number escapes my memory at present.

Or someone remind me-how many pauses were there during the Vietnam war, IRAQ INVASION OR LYBIAN INVASION, to “protect” civilians?.

This pause is well timed , the Syrian and Russian air forces are badly needed to destroy the top rank ISIS convoys fleeing Monsul and heading to Dayr az Zawr , and elsewhere in Syria . After 24 hours, any aid should be delivered, any jihadist leaving, gone , now the barbaric Wahhabi’s face their karma .

The best thing to do isn’t disperse the forces and attack in all perimeter but is to concentrate in a advance and cut the city in two in a line Citadel – International Airport, but i don’t know the odds and the enemy forces.

Look at how much trouble the Hama offensive gave them, with less than a thousand rebels from Darayya to help. Russian/Syria can’t possibly be stupid enough to let 10,000+ leave and cause trouble elsewhere can they?? Well, they’re letting it happen in Moadamiyah and Zakiyah now, apparently they are. They need to use some common sense, if they ever want to win this war.

Disagree – they need to muster the terrorists into a single killing ground, then redeploy their freed up troops and turn Idlib into a free-fire zone. Grind the jihadists into meat paste and let the Turks take any refugees. Good riddance to bad Wahabbi rubbish…

Those are words that aren’t genuine in practice; as I said just 700 reinforcements enabled a push that got to the outskirts of Hama city, 10,000 from Aleppo or another few thousand of Moadamiyah and Zakiyah would cause a whole lot of havoc that, if Hama is any indication, will take a gigantic amount of effort to undo. The casualties in achieving that will be many times greater than if these two entirely besieged villages were taken by force.

look, on the other side, the frontlines are shortened. and especially in aleppo is this needed. is better take aleppo and let go the islamists than 3 monthe besiege the part of city and inbetween the turkish backed fsa will simultneously attack aleppo.

Yeah I thought the same when SAA started negotiated & transported militants to Idlib from the Damascus suburbs – but realized that part of SAA’s whole problem has been its inability to mass its fighting force. At least by negotiating militants into Idlib, the SAA can reduce being spread across so many fronts & subject to diversionary attacks, this may reduce SAA’s long term problem of always being diluted force, putting out various fires all over country. Transporting militants also has secondary effect, seems when you put rival militants in one place they fight each other – competing for foreign resources/warlord/ smuggling/ black market. Now that alone won’t win the conflict for the SAA, but their strategy not as illogical as it looks.

True, they will free up troops but don’t you realise? They’re letting the enemy do the same!

The infighting is a fluke; they’ve all been bunched together across the country for years, they seem to co-exist just fine, hold off the government, even expand like in Hama, just fine.

Hmm, good points. Perhaps I was being too optimistic…

if this disgraceful regime change operation has taught me anything, its that our feckless Deep State has a very different definition of “moderate” than do we plebs…

It’s not as irrational as some would think. The SAA probably needs to regroup, bring up reserves and munitions, and let their frontline forces in the area recover. Sustained operations naturally degrade the fighting efficiency of the troops involved. The terrorists may get a break too, but they will get less out of it, since their ability to re-arm is lesser here. It simultaneously gives a PR opportunity that runs counter to the Western MSM narrative.

Also, urban areas are the third worst type of terrain to attack someone on, especially the heavily cinderblock construction favoured in Syria. Only mountains and specially created defensive belts constructed by military engineers are worse. Operations research has indicated that even the worst supply situation cannot seem to degrade combat strength below 60%. Retreating is unlikely to have a good effect on the morale of these Salafists, nor to increase their reputation with other Salafist fighters. whereas having no way out and facing near certain death is likely to play upon their disposition to fanaticism and increase determination to a limited degree. Therefore, wherever these terrorists are encountered next, they are likely to be a bit less effective than they are here. And, if only some accept the chance to escape, which is likely, the ones who remain will be that much easier to eradicate.