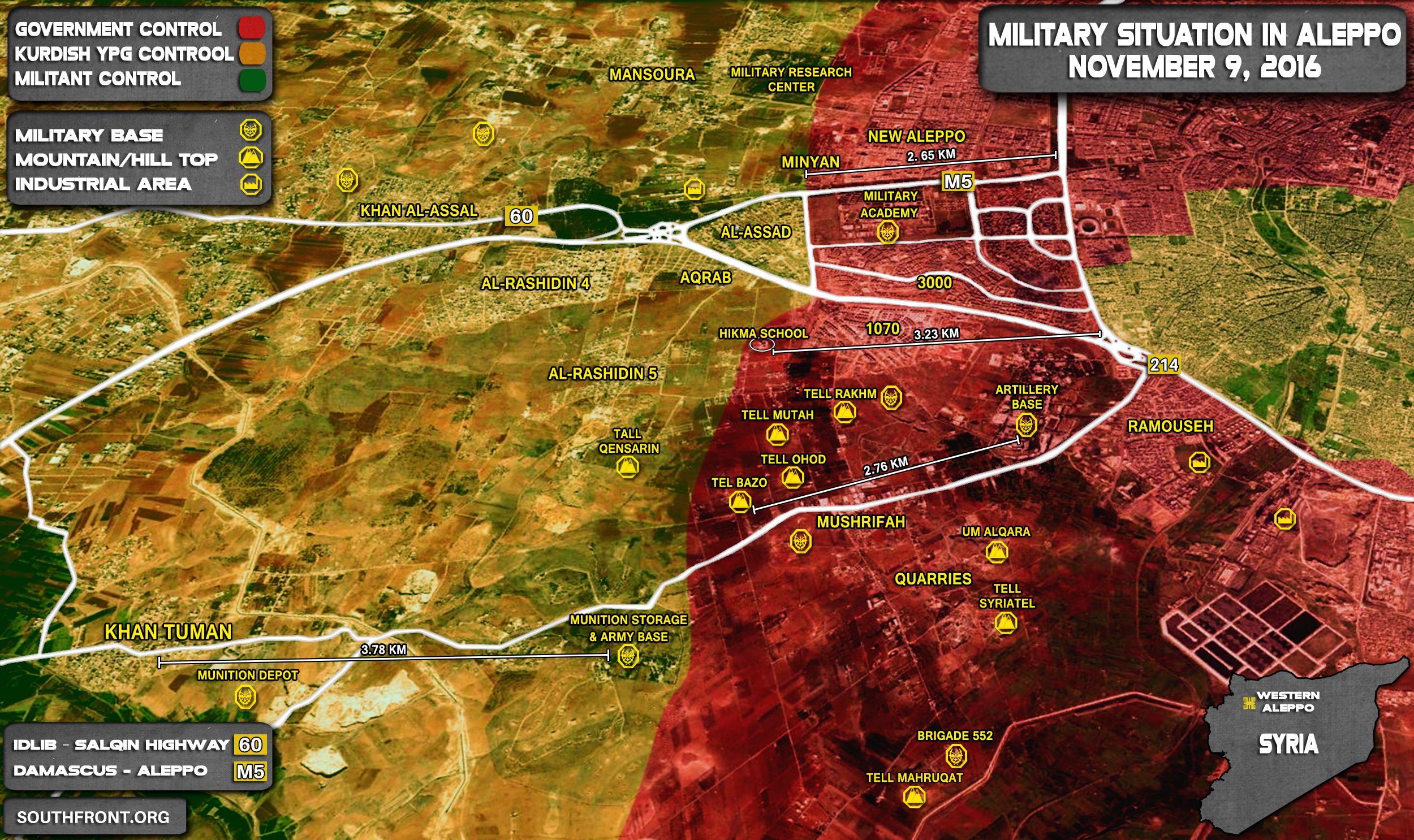 As Donald Trump won the US presidential election and Russia’s Admiral Kuznetsov battlegroup reached the Syrian waters, the defenses of al-Qaeda-linked ‘opposition’ collapsed in Aleppo.

On November 9, the  Syrian army and Hezbollah broke Jaish al-Fatah’s defenses in the southwestern countryside of Aleppo city and seized the strategic area of Hikma School. The Al-Nusra-led coalition, Jaish al-Fatah, seized the al-Hikma School in August 2016 and used it as an outpost of for attacks on the government-controlled areas in southwestern Aleppo.

We recall, on November 8, the government forces liberated the 1070 Apartment Project, the Al-Rakhmih Hill and the Motah Hill. The control over these areas allowed the army and its allies to advance on the Hikmah School last night.

Since November 8, the Syrian army’s Tiger Forces and the Destert Hawks Brigade have also made a series of attacks on the Minyan area, liberating about 90% of this area from Jabhat Fatah al-Sham (formerly Jabhat al-Nusra, the Syrian al-Qaeda branch) and its allies from Jaish al-Fatah.

Meanwhile, heavy clashes are ongoing in the neighborhoods of al-Assad and Jam’iyat al-Zahra in western Aleppo. At the same time, Syrian army and Hezbollah are deployed at the Hikmah School threaten the southern flank of Jaish al-Fatah’s positions in the al-Assad Neighborhood. Considering the recent developments, the government forces would have control of al-Assad in the nearest future.

Clashes in the 1070 Apartment Project on November 8:

A drone view on the 1070 Apartment Project:

The US seem to be rejecting the let’s give our Souls for Israel, because Israel is a lie that can’t make it from Lilliput to Manhattan because the Transfer was BS, my bank balance and internet were ransaked by the Transfers attempt so imagine what happened to the serious Players when Hillary had to attack even me. But they lost and we will recover Praise be to Allah, I said from the beginning of the Baghdadi Caliphate, Allah is sacrificing the one’s He loves the most, the Median between Divinity and Man to help cause rapprochement between US and the Russian Federation, that’s how it panned out folks, that’s how it panned out, Terrorists are just plain Terrorists now thanks to the Sacrifice of my Salafist Brothers in Religion.