Some 500 members of Jabhat Fatah al-Sham (formerly Jabhat al-Nusra, the Syrian al-Qaeda branch) and its allies from the Jaish al-Fatah operation room have been killed in recent clashes with the Syrian government forces in the western part and the western countryside of Aleppo city, according to pro-government sources. Pro-militants sources sargue that the “opposition” has lost only about 200 fighters.

The casualties were suffered by the militants during the recent clashes in the areas of Minyan, al-Assad and Hikma in western Aleppo that resulted in their liberaion by the Syrian army and its allies.

According to pro-government media outlets, the militant-controlled town of Khan Tuman will become the main target of these operations and Hezbolalh will play a crucial role in them. However, these reports have to be confirmed, at least, by movements on the ground.

Till then, the government forces have 4 main options to choose in the Aleppo countryside: 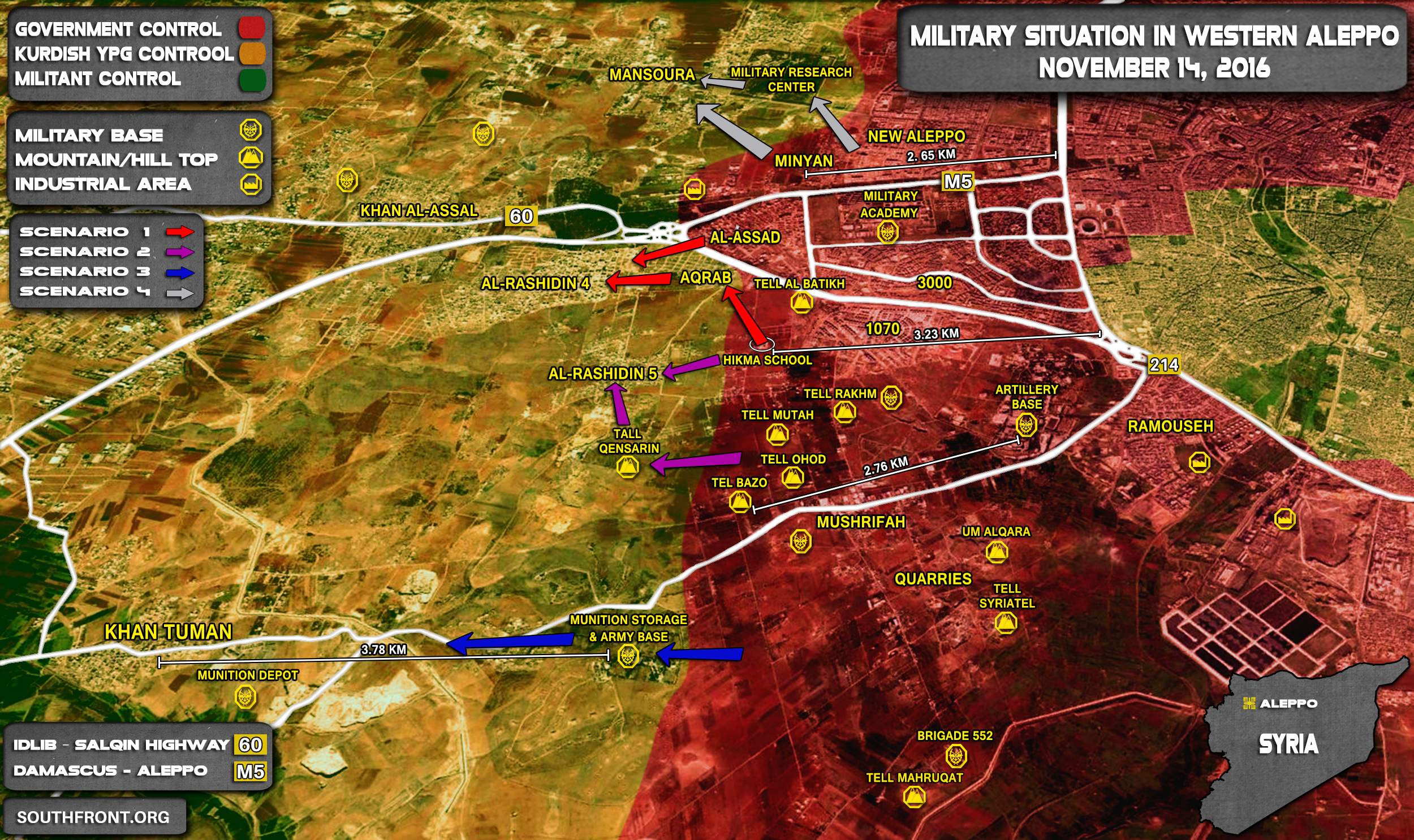 All of the above. Khan Touman, Rashideen 4 AND 5 as well as Mansoura, the latter of which will finally provide a proper buffer for the people in Aleppo from shelling from the west. I don’t know why Iran drags this out; they’ve got loads of troops, just drop in, say, 20,000 more and swarm over the place rather than struggle for meagre gains.

i agree Iran has to be all in as their next.good comment dude

None of the above, go for Layramoun and possibly Sukkari inside city, these areas seen little activity so militants will probably not be expecting it ,besides their proximity to densely populated areas is very troubling.

There will be a point when the SAA will be able to just “break out” and go as far as their supply lines will let them.

With that being said, my answer is: “None of the above”.

In my opinion, they should go directly south along the highway the leads to Abu Duhur and reclaim the military base there(and a well strategically positioned airstrip) using a two prong attack originating from Aleppo and Hama area.

The benefits of taking Abu Duhur are three fold: The highway going thru there will provide a backup if the current one is severed. This highway will also bring more supplies quicker to aleppo and the surrounding area, and can support a broad front for attacking FSA in the entirety of Idlib. Lastly, Abu Duhur will provide faster/closer facilities for Air Support.

Looking at the map, this strategy seems to be already in place.

Other than that I think this is an excellent overview of the options outside of the city. SAA has a lot of forces there including all of their elite forces so they have the strength to undertake a major operation. SAA clearly has the initiative now

Another advantage of going west is to avoid those “never ending” hospitals being hit in East Aleppo. I wonder that part of the city must have global Medical facilities before the war as there seemed to be unlimited number of medical hospital facilities in every block of the city. And the German Ambulances keep on being devastated by the sir strikes do they carry “homing signals”?. May be White Helmets and their script writers are running out of scenarios and they should consult Hollywood.

On serious side though developments in Raqqah and Al Bab are alarming. Once Al Bab falls there are good chances of direct clashes between SAA and FSA. FSA has acquired a formidable area in Northern Aleppo and this is time that SAA should either consolidate the Southern front or get ready for SA onslaught.