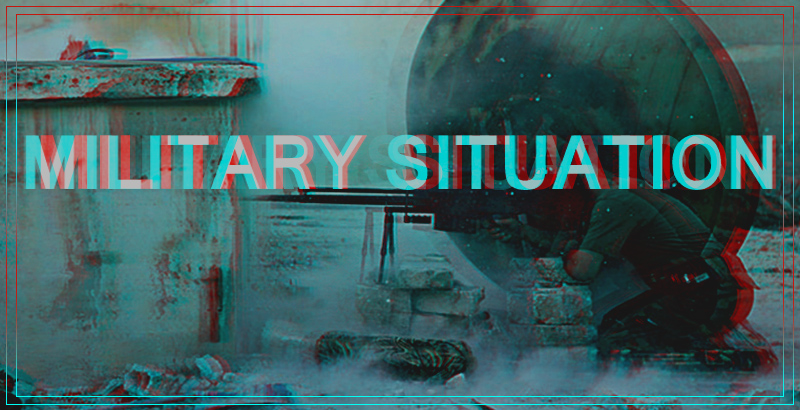 Clashes between the Syrian government forces (the Syrian army, including the Tiger Forces, the Desert Hawks Brigade, Hezbollah and others) and the Jaish al-Fatah militant coalition, led by Jabhat Fatah al-Sham (formerly Jabhat al-Nusra, the Syrian Al-Qaeda branch) have been ongoin in the western part of Aleppo city.

The pro-government forces on the battlefield are supported by the Syrian Arab Air Force. The Russian Aerospace Forces don’t provide a close air support to them, but provide intelligencce and coordination of the operation (recently, the Russian Tu-214R electronic surveillance aircraft was observed in the area).

Experts note that the jihadists have concentrated a high number of experienced troops, artillery, rocket launchers and military equipment at a restricted front in western Aleppo. To do this, they had been pushed to use almost all their resources from the rear bases in Idlib province. If Jabhat al-Nusra is not able to achieve a decided success in clashes with the government forces soon, this will lead to its total collapse as a powerbroker in the war. The group’s material and technical base will be destroyed and experienced troops and field commanders killed in the clashes. We’ve been already able to observe signs of this tendency since the failed al-Nusra attempt to dig in the Ramouseh Artillery Acandemy in southern Aleppo.

The video filmed on October 31 shows clashes in Minyan:

On October 31, the video also appeared on Youtube, showing the advanced Russian-made T-90 main battle tank (MBT) involved in clashes with militants in the Minyan area in western Aleppo. 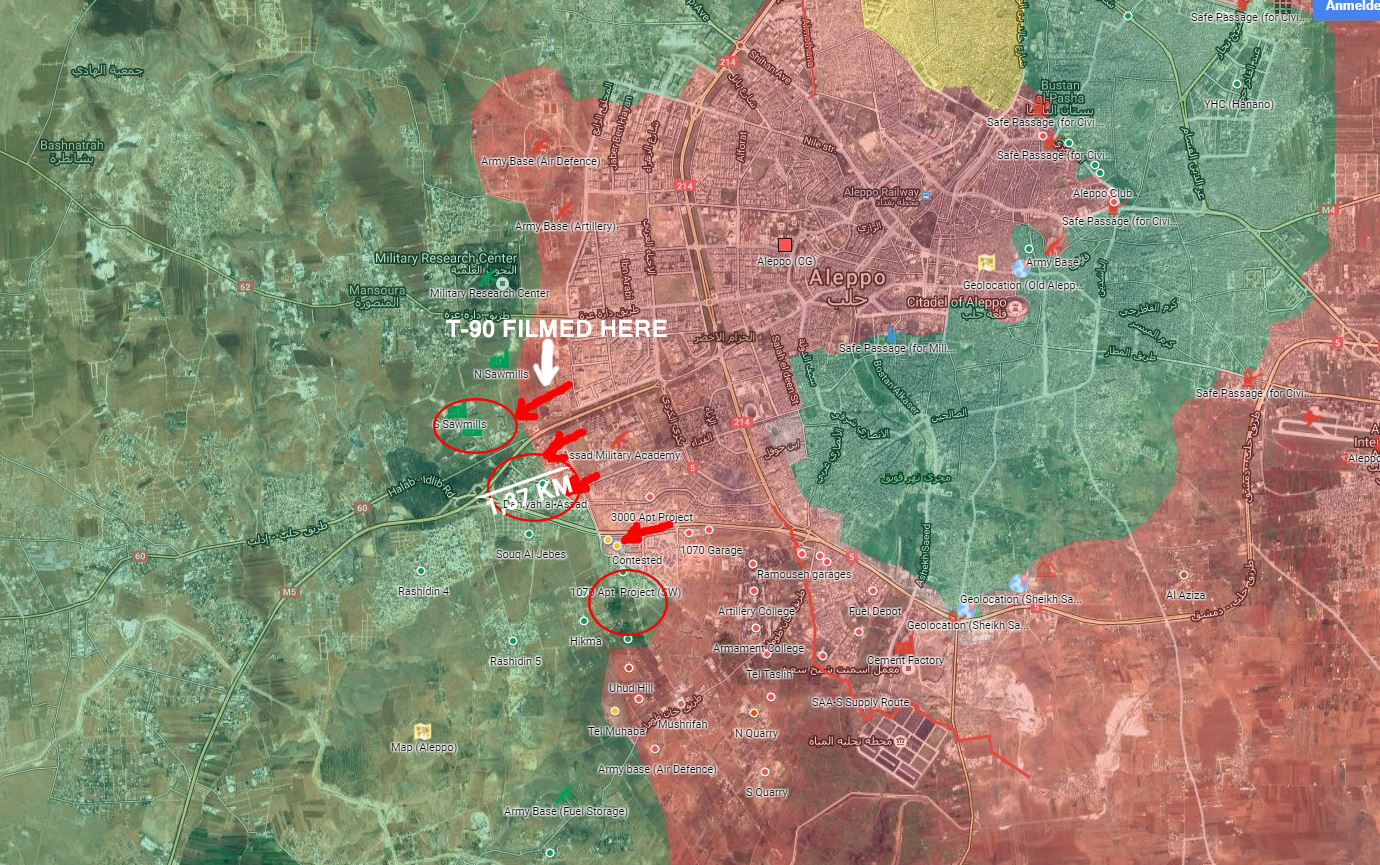 Last weekend, elite units of the Syrian Army’s Tiger Forces and the Desert Hawks Brigade were deployed in Aleppo to counter the militants’ offensive operation to capture the al-Assad Military Academy and the nearby areas. Both formations operate T-90 MBTs supplied by Moscow over the last year.

The Kurdish People’s Protection Units (YPG) and the Ankara-led forces (Turkish-backed militant groups and the Turkish Armed Forces) have been competing in the northeastern countryside of Aleppo city. Both forces are seeking to set a foothold to capture the strategic town of Al-Bab.

In this military situation, the coordination between the Syrian government forces and the YPG has once again become reality on the ground. The recent Kurdish operations in northeastern Aleppo were coordinated with the Syrian army and military sources say that Moscow increased military supplies to the YPG in the area. 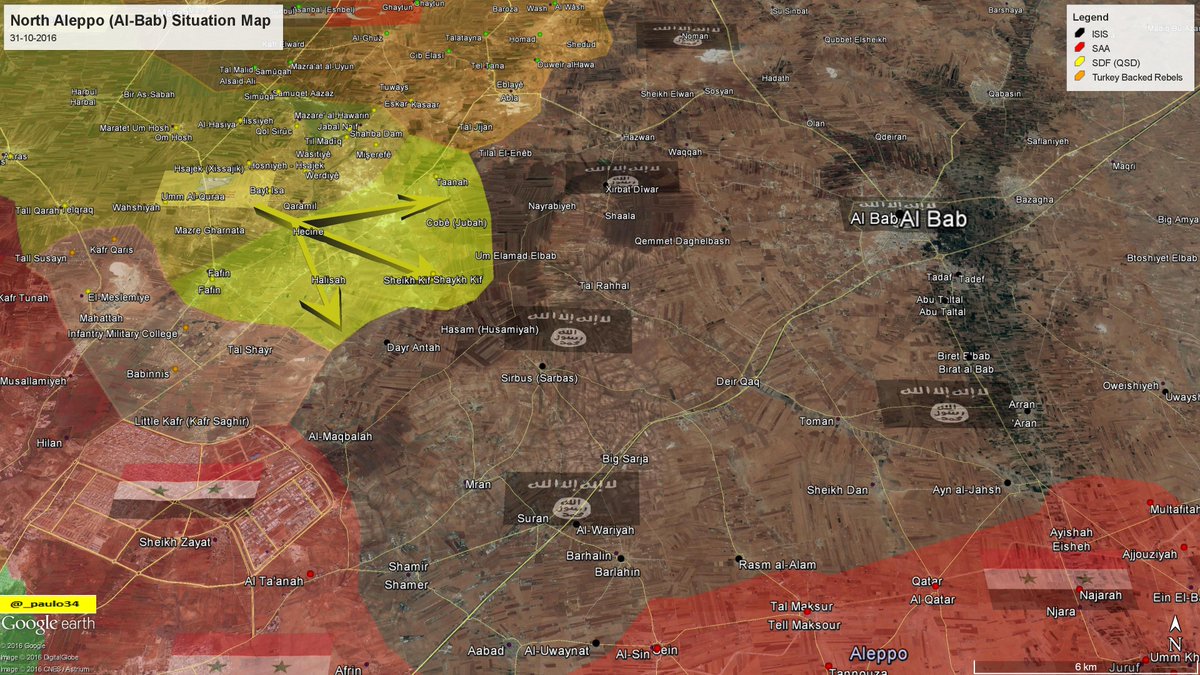 Moscow and Domascus uses the Kurds to build up a buffer zone to prevent the coalition of Turkish-backed militant group from attacking the Syrian army and its allies in Aleppo city. In mid-October Harakat Nour al-Din al-Zenki officially announced that the next stage of Turkey’s Operation Euphrates Shield will include an advance on the ‘regime forces’ in Aleppo.

Seriously, guys, what’s going on here ? Yesterday I read here ‘Al Assad’ neighborhood to be completely in gov control. It was mentioned in several of your articles. Today you show it as terrorist-controlled on the map. When was it lost ?

ISIS can be defeated in Syria and Iraq only if US led coalition, Russia, France, Syria, Turkey, Kurds will conduct blitzkrieg against ISIS, Al – Nusra, Al Qaeda and any groups associated with them. On June 2014, ISIL had at least 4,000 fighters in Iraq. CIA estimated in September 2014 that it had 20,000–31,500 fighters in Iraq and Syria. The Syrian Observatory for Human Rights estimates that the force numbers around 80,000–100,000 total (up to 50,000 in Syria and 30,000 in Iraq). If all countries participating in the Civil Wars in Iraq and Syria would attack simultaneously, with all borders closed ( Lebanon, Turkey, Iraq, Iran, Gulf States) …all refugees to be placed temporarily in Jordan, Turkey, Lebanon until their asylim applications posessed in speedy way, and decide who gets to stay (and in which country), and who will need to go back from countries that don’t have Civil Wars, and those who simply want to look for economic reasons ijn UK, Germany, Scandinavia, Austria, France, Italy, Greece, etc..all members of EU/NATO (except for Turkey, who’s an Associate member, like Ukraine ). All participating countries from EU and non EU coalitions must end infighting, political maneuring, search for oil, $$$$, power. Unite like they’ve done in WWII and defeat all terrorist groups IF THEY WILL ACT IN COORDINATED WAY. If we won’t get rid of IS- they will get rid of all military in Syria and Iraq. Once these goals are achieved, next step is initiate ceasefire, sign peace accord, and conduct open, monitored by UN and P5+1 (germany), and let Syrians choose who they want to be their next president. We need to stop fighting against each other, and fight WITH EACH OTHER against IS and all terrorist groups in Syria, Iraq, ME and N.Africa, followed by local effort in Mindanao (PR), and any location in Asia, Africa, Europe, Americas, Australia/NZ. 50,000 in Syria can be defeated in 2-3 month’s. 30,000 in Iraq can be dealt a blow and extermination (plus POW) in 1-2 month’s. After all is done, and Peace returns to Iraq and Syria, then ALL participating forces should meet on the border of two countries, decide hat needs to be done in the Peacetime, and have mutual respect for fighting these animals who kill everyone , mostly by beheading, as well as controlling fully local population and all fighters who’ve come from around the World.