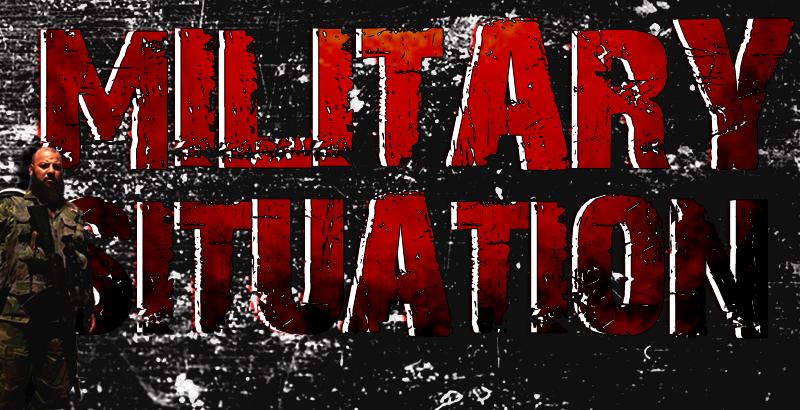 In a separate development, the Syrian army, Hezbollah and its allies seized from militants the Ma’saraniyah Youth Housing in the northern part of eastern Aleppo pocket.

Last night, Jaish al-Fatah launched a counter-attack against government forces in Sheikh Sa’eed and even seized some points in the northern part of the neighborhood. The main night clashes took place at the electrical station in the area.

The map below depicts the military situation in eastern Aleppo pocket after this counter-attack: 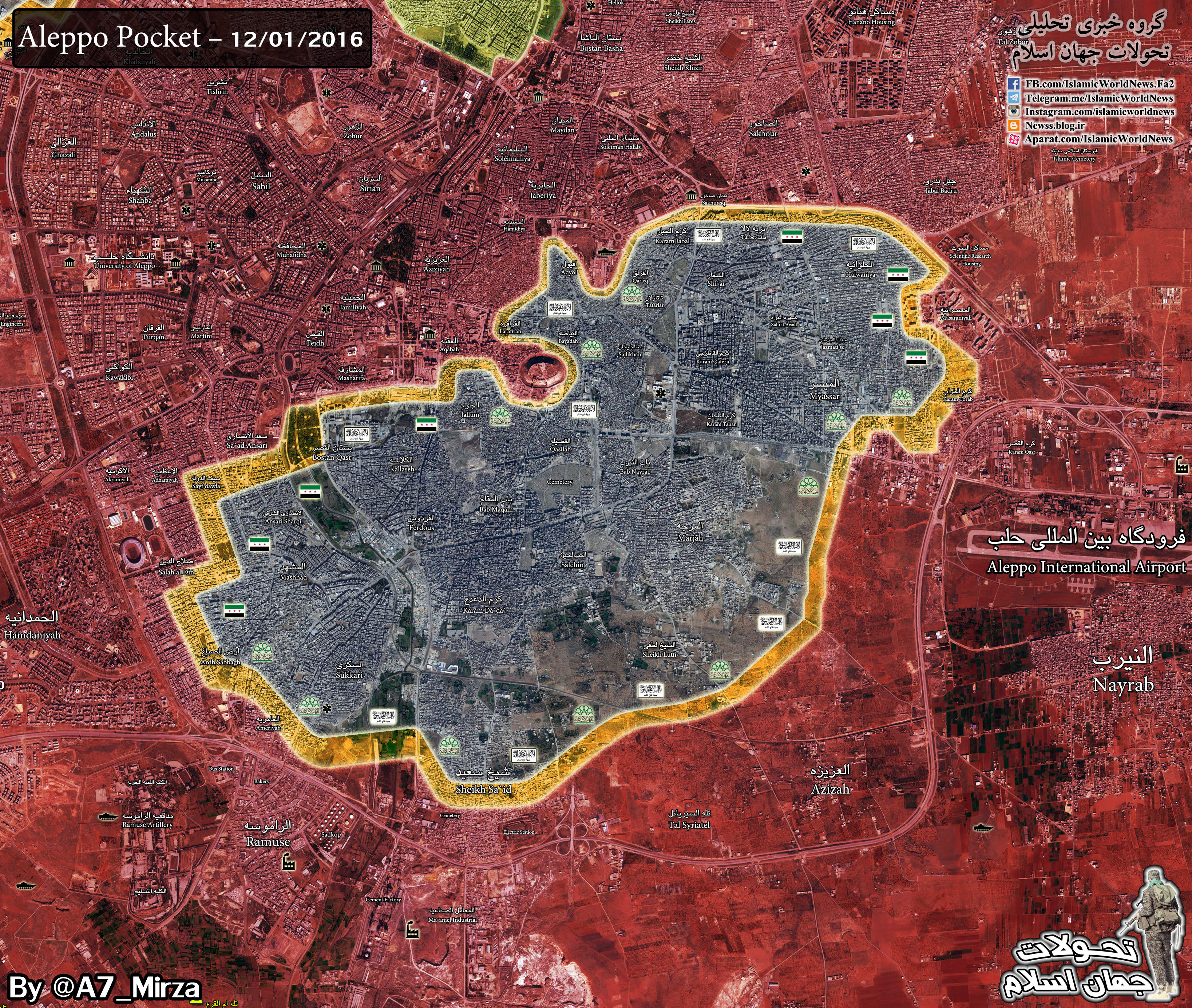 By December 1, Syrian government forces have repelled the militant counter-attack in Sheikh Saeed and allegedly regained all points that they had lost during the night.

The map below depicts the military situatuation in Aleppo according to these reports: 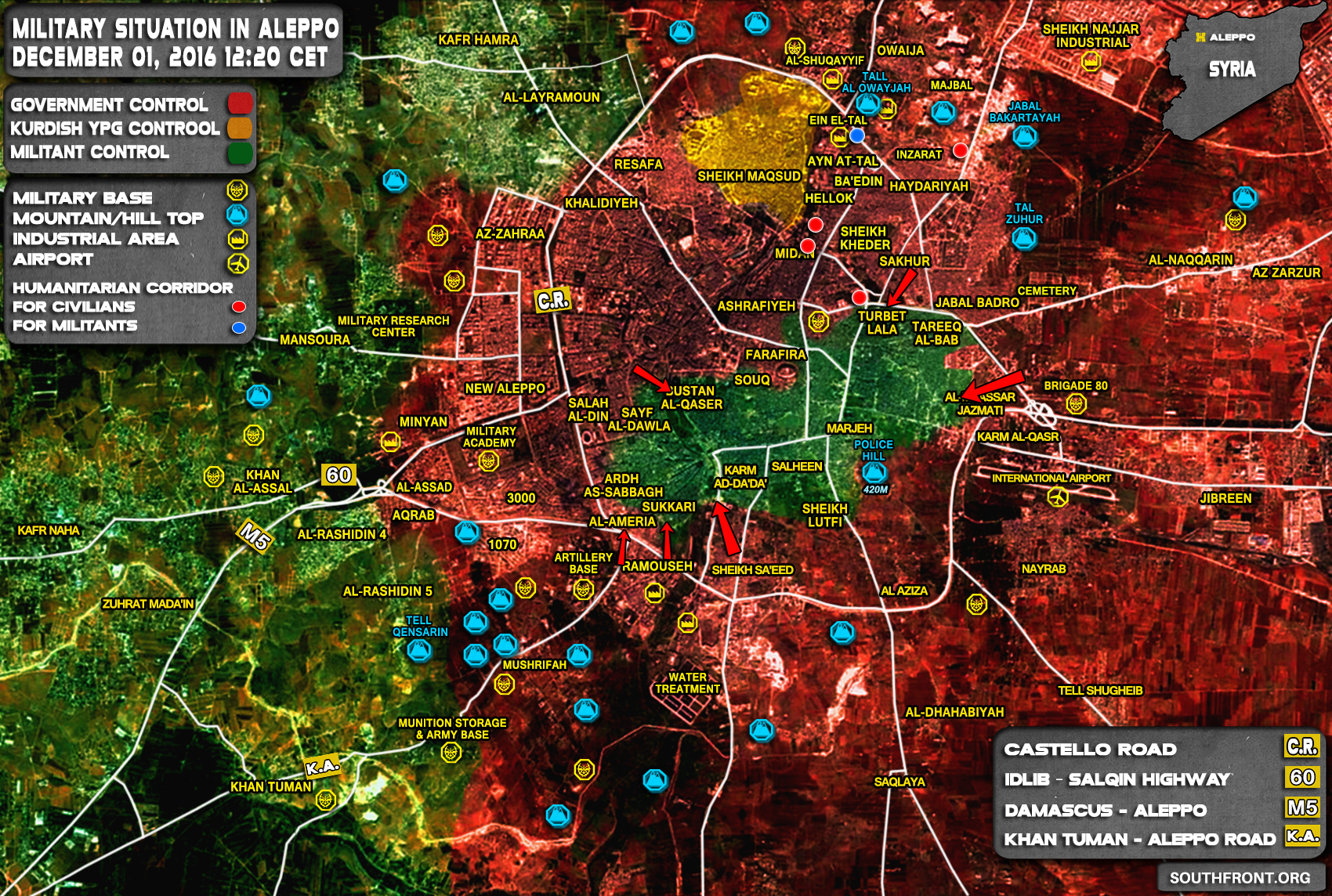 At the same time, the Syrian army, Hezbollah, Liwa al-Quds an other pro-government groups continued attacks against militants in Karam al-Jazmati, Karam al-Tarab, Amiriyah and Sikarry and in the area of Bustan al-Qasr.

Experts say the strategic goal of Syrian military in the current situation is to fully secure Aleppo city and to launch an operation to develop the advance in the direction of Idlib.

At the same time, the government will need to contribute efforts to oppose the Turkish military expansion in northern Syria.

Meanwhile, reports appeared that “Aleppo rebels” have created a united command to fight back the Syrian army’s offensive in Aleppo city, again… The newly created command is allegedly named “Aleppo Army” and will include Jabhat Fatah al-Sham, Ahrar al-Sham, Sham Front, al-Zinki and other militant groups operating in Aleppo city under the banners of Jaish al-Fatah and Fatah Halab coalitions.

However, it looks as a PR move for the mainstream media because on November 15 the same factions announced the creation of the so-called “Aleppo Command Council” with the same goal. The united commad already exists.

The “truce” effort for humanitarian pause again provided rebels time to regroup and hence they attacked in later half of the day. Due to those Russian-Turks “talks” most of the front was in a lull from SAA POV. This should not have happened as remaining part of Aleppo is still full of militants and hardware and would take a lot of time if no matching momentum built-up as the Northern Aleppo. Dividing remaining part in two in direction of citadel would be a possibility. Still surprising that Rebel mobile communication is still ongoing although internet seems to be down. Russian could provide GSM blockers that would break the strategy guidance from outside operation rooms. “Western expert” by now must be sitting in Khan Tuman to “advise”.

I wonder how many Western ‘advisors’ are caught there and getting nervous. Maybe Assad should say something about ‘humanitarian’ workers captured over there getting a fair deal.

Most of those western “advisors” appear to have left (“the mercenaries left in buses” during the cease fire). That was when the US started the first time to lament about the civilians and war crimes and humanitarian calamity. Then Russia decided for unilateral cease fire to let them leave, whereafter the US didn’t care anymore about civilian horrors. Apparently there are still some Turkish and Arabic or Israeli advisors in Aleppo and Turkey now howls war crime in Aleppo and Kerry ran to Lavrov to convince Russia to stop fighting in Aleppo! Also, Obama appears to want to delay the fall of Aleppo until after he left the presidency so that the fall of Aleppo and with it the failure of US foreign policy in Syria falls on Trump, not Obama.

When people talk of humanitarian calamity and so many dead, there is usually some other, political or western military reason behind it.

Yup, common Assad please let these poor terrorists shoot mortars into the free part of Aleppo. Have pity on these murderers and their loved ones.

there was no truce, the SAA and allies would also stop over the various phases of the liberation it’s not that you can steadily advance all the time. Do you have the original plans of the Aleppo operation? because nobody said that they were going to liberate the full city in a single phase. It’s incredible that after the big successes of the SAA somebody still feel the need to bitch about. You gotta let the people on the ground do their job and go back playing call of duty.

I think this is closer to truth, attack, counter-attack and counter-counter attack in 48 hours does not leave much time for a truce…plus the Russians make a distinction between activities of their forces and those of Syria (and Iran), Aleppo is a mostly Native+Iran/Palestine operation, to parse the meaning.

south highway reclaimed is great news! it is hugely important logistical corridor which also makes possible to taxi troops fast from one pocket front to another. pressure is now put on north and south which means that most fighters are concentrated there. this enables the SAA to concentrate it’s superior numbers at police hill and launch an attack towards the citadel. when pocket is split, game over. hopefully it’s gonna happen within a week, troops are badly needed for Al-Bab…

What about Idlib? When Aleppo falls, do you think the SAA should start wiping out the jihadists in Idlib? This seems to be where most of them are in the West. They have been transporting all the surrendered terrorists there. Shouldn’t they take them out there and secure the border? If they go for Al Bab, won’t it leave them vulnerable from Idlib and SW Aleppo?

Idlib , at least the half nearest Aleppo , clearing highway # 4 south , is agreed , the next greatest need . But Deir az Zor , not just for the oil , but because with it and Raqqa (which is already underway) , “plan C” , the creation of “Sunnistan” remains a real achievable goal for those intent upon Syria’s fracturing . Without Deir az Zor , the forces of darkness only have one city Raqqa , hard to build a “nation” out of one city .

Yep, the Deir Azz Zorr garrison need assistance, they have been one of the Syrian government’s rare lucky breaks in this war. Their presence, though surrounded by ISIS, has stopped the GCC/US/UK/France from getting what they really wanted – the terrorist occupation of an eastern and north eastern corridor, that is the exact pipeline path that Qatar wants to Turkey across Syrian territory. The SAA’s Deir Azz Zorr presence means the NATO justification to invade because of ISIS – transferring control of exactly the desired territory – collapses. It’s no coincidence the Pentagon chose to attack there with USAF when scuttling last major ceasefire. But SAA need to secure that situation solidly as soon as possible.

This is a good question. i believe it could go either way, but that it’s more likely that there is first the focus on solving the turkish incursion and capturing Al-Bab. In my opinion, all available resources should be poured there immediately, regardless of weather Aleppo pocket is liberated or not. Al-Bab MUST be captured by the SAA. Here is why: 1. the threat is done by a higher level threat – official national army vs proxy militia. 2. Capturing Al-Bab would contain the turkish army some distance away from imperative Aleppo. 3. otherwise, if SAA ignores it and turkish army takes Al-Bab this would give Turkish Army and “FSA” the time to entrench. 4. Al-Bab will certainly serve as a springboard for any further incursions into Manbij and south towards Raqqah, which will further aggravate the situation in entire north and central Syria. 5. from these entrenched positions of Al-Bab, turkish army will project a “zone of insecurity” via FSA my means of constant threat attacks on SAA supply routes, and also to kurdish-controlled territory. 6. this hostile presence would also permanently tie a large contingent of armed forces to eastern Aleppo, making them useless for further operations. This will make other major operations as taking Latakia more difficult. 7. in the long run, Idlib Al-Quida could then use the opportunity to coordinate attacks with turks and FSA and revert the SAA gains.

Opportunities of immediate response (and this is already done) is that the turkish incursion bring kurds and SAA closer together. the level of SAA/YPG joint offensive is unprecedented. not to mention that newly formed kurdish group operating under SAA.

Today we’ve seen Erdogan withdraw his statement about withing to topple the syrian government. this is good, but it still doesn’t solve the issue. in my opinion, it will take a serious joint operation between SAA and YPG to push the turks out. the main trick will we that SAA retains control over Al-Bab.

Another question is what would we gain by going to Idlib? Al-Quida there is prety badly beaten from failed offensives. secondly, Idlib is a playground for syrian and russian air forces, which have neutralized the terrorists there before. Al-Quida has also lost its experienced commanders and has bled to near death, while icam pretty sure they dont get the recruits they used to (all crazies are going to all-out crazy ISIS now). Thus, there is nowhere neat the level of threat taking Al-Bab would pose to Syrian army. Secondly, Idlib operation would demand large logistical support which has to go through an increasingly insecure supply corridor. even if successful in a short time, the terrorists can simply move their stronghold to Jisr-al-Shigur and attack the supply lines to Idlib. another operation would be needed to thicken the government corridor to Idlib. and even if secure, it would still resault in a long front line to protect, all of which still wouldn’t really change anything in Idlib province.

Thus, investing in Idlib operation is (at the moment) dubiously important military goal.

Thus it is in my opinion clear that Turkish incursion demands immediate and primary focus, even beyond Aleppo pocket itself.

Interesting. Thank you for sharing your insight into this matter.

Yes, I waited for the liberation of that highway on the south with great anticipation, it is finally free for use! It would make transport in the city much easier and faster. Until now they were forced to use some small roads for supplying the city.

Assad should organise ‘the mothers of Syria’ who go through the lines to get all civilians, wounded and willing fighters out. Pretty sure there should be at least 5000 older Syrian Sunni women in Aleppo that are brave enough to do this. And it would show the UN.

Hopefully the Syrian Arab Army can maintain its advances, a piece every day, to liberate all of Aleppo and with it give the war in Syria a “one-way” direction for Assad – i.e. a cleaning up of remaining pockets in Idlib and Deir ez-Zor and the second larger battle in Raqqa. Once western Syria is again under Assad’s control, the east will fall more easily because there won’t be so many reinforcements and supplies coming in anymore. And hopefully by spring, Syria will be ready to start a new beginning rebuilding itself, restoring peace and a new governance so all Syrian groups can be represented in Assad’s government. We wish it for the Syrian people and feel their pain and suffering and wish them a genuine real spring: a new life.