The situation in Debaltsevo direction has stabilized by December 21. The People’s Militia of the Luhansk People’s Republic (LPR) has managed to recapture several heights. 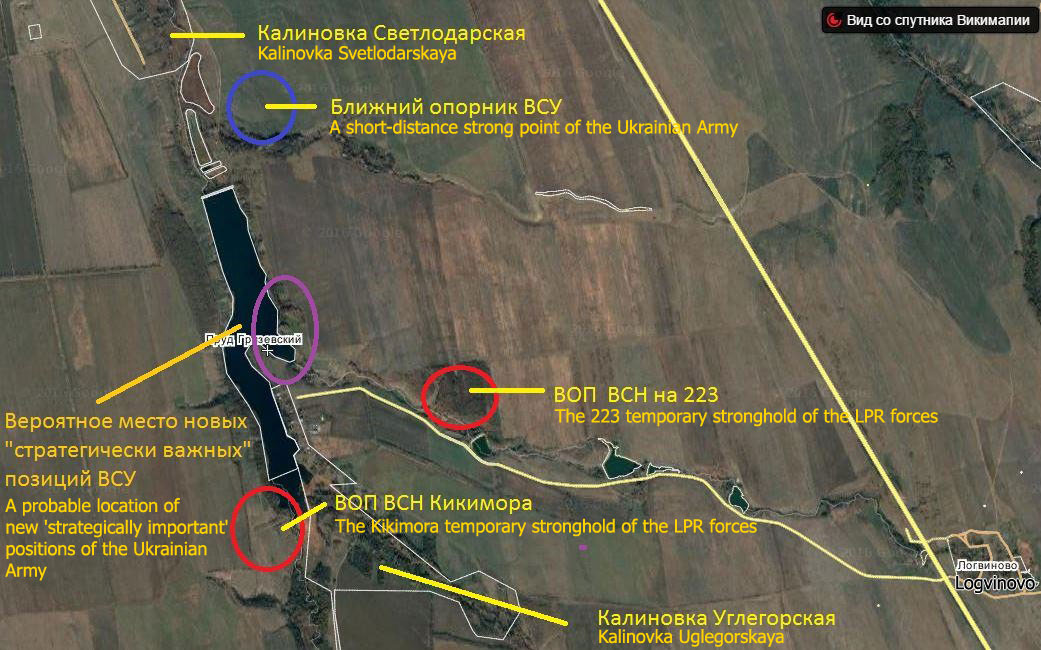 By December 21, the situation in Debaltsevo direction has stabilized, the Colonelcassad blog reported. The Ukrainian Armed Forces did not manage to achieve significant progress in the direction of the villages of Logvinovo and Kalinovka and moved away from the most part of the occupied territory after the suffered losses.

At the moment, the fights have a positional character that is enough typically for episodic escalations, which gradually fade after several days of hostilities and turn into a standard situation for the war in Donbass of 2015-2016.

Using the superior artillery fire, the Donbass People’s Militia tries to oust the enemy from the positions, which are still controlled by Ukrainian troops, and then come into them with the infantry forces and restore the status quo, which existed before the offensive of the Ukrainian Army.

According to the last reports, during the night, fighters of the People’s Militia gained a foothold on the recaptured positions. The Kikimora height was recaptured by the People’s Militia, while the heights of Zvezda and Krest were also left by Ukrainian fighters and are currently controlled by artillery of the Luhansk People’s Republic (LPR).

If the Ukrainian forces had a task to send a message to certain circles in the West or to cover certain processes in Ukraine, then, in terms of losses, the operation proved to be too costly – the Ukrainian hysteria about the large number of dead and wounded soldiers still continues.

According to an official representative of the People’s Militia of the Luhansk People’s Republic (LPR), Andrey Marochko, during the attempts to break through the militia’s blockade in Debaltsevo, 40 soldiers of the Ukrainian Armed Forces were killed, while 50 others were wounded.

Ukrainian media reported about hundreds of dead soldiers near Debaltsevo, however, the Ukrainian military authorities said that only six soldiers were killed and less than two dozens of others were wounded.

As Marochko noted, the Ukrainian Armed Forces hide their losses, as the republic knows about “40 killed and more than 50 wounded Ukrainian fighters from the 54th Brigade and the 11th battalion of the 59th brigade.”

Kiev is willing to suffer losses so that they can claim that they thwarted the ‘Russian invasion’ that they have been predicting for two years.

Its a pointless exercise. Trump won’t buy it and his team will explain to the idiot Eurotrash to STFU and stop blaming Russia over the Ukropistani debacle and get on with demanding that Kiev live up to its obligations. Of course, the Banderite inbreds will respond by fucking everything up even more than they already have, and eventually their whole rotten stinking edifice of a regime will collapse utterly.

Banderite Ukropistan is DOOMED, but these Nazi clowns haven’t received the memo yet….

It’s indeed funny to read the opposit of the real situation on the dutch ” quality ” merdia http://www.volkskrant.nl/buitenland/bellingcat-rusland-beschoot-oost-oekraine-vanaf-eigen-grondgebied~a4438052/ Even though the ukrainian army is attacking , the Russians did it ! Everyone who owns two braincells can understand that Russia will never support an major attack in the dombass as it would trigger retaliations in the form of Russian gas Boycot, which would damage the Russian Economie!

I don’t think the EU is in a position to boycott Russian gas at this particular time. I rather doubt the people of the EU would take freezing in the dark as a positive development.

If Russia simply walked away from The ‘Uranium Enrichment Treaty’ with the U.S. , it would be a cold ‘blackout ‘ in the U.S. and parts of Canada too.

All major dutch “merdia” are sold out idiots. It is like they have all lost their mind or they believe that people are internet social parias who cannot fact-check things.

Although winter incursions is an annual ritual for Ukrainian armed forces but this time its of vital importance to prepare a gift for Trump that he can not refuse.

Same “Russian invasion” ruse has been used successfully earlier and backed by EU and NATO but this time its may be over stretched as Trump administration may not be impressed by “creative” imagination of Ukrainian planners.

Trump is a ‘Trojan horse’ put in place to try to infiltrate fortress Russia. Its a ‘shell game ‘ folks.