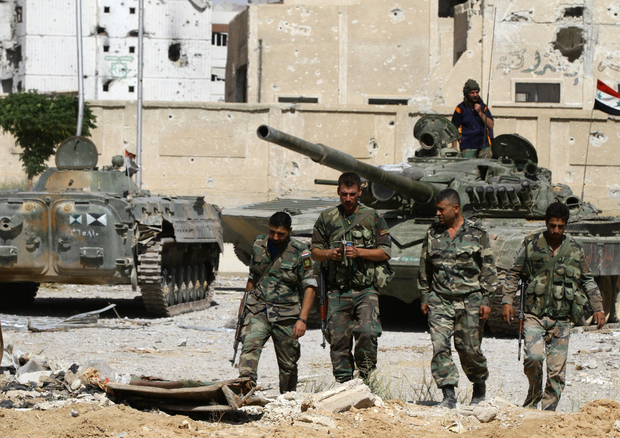 ANNA news correspondent Oleg Blokhin has released additional details about clashes between government forces and ISIS that took place in central Syria between September 28 and October 5.

ISIS launched a large-scale attack in multiple points at the Palmira-Deir ez-Zor road on September 28. During the start of the advance, ISIS terrorists were able to capture the villages of Kabbajb and al-Shulah from the Syrian Arab Army (SAA). Two Russian volunteers were captured by the terrorists in the same area.

ISIS forces pushed SAA units defending these towns to the north of the road, where they couldn’t inform the other checkpoints about what happened. That’s why the road wasn’t closed down imidiatelly and the movement on the road carried on. The two Russian nationals Roman Zabolotny and Grigoriy Tsurkan were captured by ISIS somewen at this moment.

When ISIS captured the villages, there were vehicles left there. Crucially, ISIS forces got their hands on multiple pickup trucks.

Using the SAA trucks as cover by letting them go in the front, ISIS forces moved down the road and caught the people at checkpoints unawares. ISIS forces managed to get closer to Deir ez-Zor and get real close to Al-Sukhnah. They called in reinforcements near Al-Sukhnah and later near Arak. 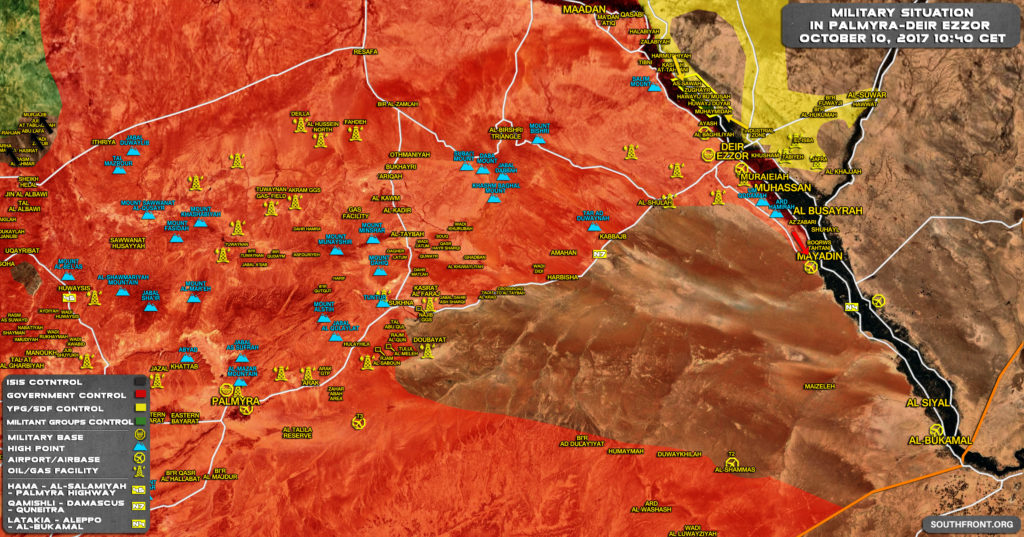 On September 29 the ISIS forces took the southern and eastern heights of Al-Sukhnah. The ISIS-affiliated media reported that ISIS got control of a part of the road between Al-Sukhnah and Arak, which later proved to be false, as the territory was under SAA control.

On September 30 fighting took place in Al-Qaryatayn. The media reported the town being raided by ISIS, but in truth it was a revolt by ISIS-affiliated cells. The revolt was a distraction, which made the SAA disperse a lot of troops over there. SAA had to stop them from trying to attack the Tiyas Military Airbase.

Up until October 4, the fighting took place near the road. ISIS forces captured yet another part of the road between Arak and Al-Sukhnah. Al-Sukhnah, defended by Syrian Republican Guard and Military Intelligence units, was pincered by ISIS from three sides.

The ISIS-affiliated media claimed that a non-existent attack on Tiyas Military Airbase took place, that ISIS captured Al-Sukhnah and that they were one step from capturing Palmyra.  The fighting continued. On the night of October 4, the ISIS forces managed to go around Al-Sukhnah from the north, and push the Saudi forces from the al-Tantura mountain. ISIS fired artillery shots from the mountain at the city. The soldiers in Al-Sukhnah were ordered to hold positions until morning. Palmyra and Deir ez-Zor assault teams were getting prepared to clear the road from the terrorists in the morning. On the morning of October 5 they moved out, and by midday the road between Arak and Al-Sukhnah has been cleared out. The road between Deir ez-Zor and Al-Sukhnah were being cleared the following day.

The SAA are in the process of retaking Mayadin, one of the last ISIS enclaves on the  western bank of the Euphrates. If successful, the SAA will regain control of Iraqi-Syrian border on this side of the river.

The Russians must focus air support for SAA and allies only, this way they can eliminate and secure this region. The SAA needs to better coordinate and time their flanking maneuvers and to provide consistent accurate strikes in support. Russia can’t try to play diplomatically gentle with Turkey they need to learn how to use a firm hand at times and polite diplomacy when both sides are cooperating.

it was all plan by US TO SUPPORT HTS AND ISIL AT SAME TIME TO ATTACK SAA.AND DRAG SAA TROOPS FROM REACHING AND ATTACKING ISIL ON MAYDEEN . BUT IT DIDNT WORK BCUZ TIGER FORCE DINT STOP AND MOVED ON TO MAYDEEN. NOW WHEN ISIL SAW THIS THEY WILL BE TRAPPED INSIDE . THEY STARTED WITHDRAWING AND MOVED BACK TOWARDS MAYDEEN AND ALBUKAMAL JUST LEFT SOME FIGHTERS TO HOLD SAA ON SUKHNA DIERZOR HIGHWAY SO THEY DONT ADVANCE. BUT SOON SAA GOING TO LAUNCH BIG OPERATION FROM SUKHNA AND AL SHOULA MOVING TO WARDS SOUTH