On March 16, the Syrian Arab Army (SAA), the Tiger Forces, the Republican Guard and their allies continued their advance in the Damascus subrub of Eastern Ghouta. Government troops engaged militants in the villages of Saqba and Jisreen and started working to consolidate their gains in Rayhan.

Pro-government sources speculated that militants had already started withdrawing from Saqba. Nonetheless, these reports have not been confirmed yet.

On March 15, Rayhan reportedly came under a full control of the SAA. However, that area still had to be secured. On the same day, government troops liberated the village of Hamuriyah and reportedly evacuated about 12,500 civilians from the area.

Meanwhile, reports are circulating that the SAA and Jaish al-Islam have reached a preliminary reconciliation agreement in the Douma area of Eastern Ghouta. According to the available information, under the agreement, Jaish al-Islam members will hand over all their heavy weapons to the SAA, will release prisoners and will allow SAA units to enter the area.

Jaish al-Islam members will be able to withdraw from the area or to settle their legal status. The SAA will also start providing additional humanitarian aid to the area.

If the SAA and Jaish al-Islam start impleneting the reported agreement, government forces will be able to focus on combating Hayat Tahrir al-Sham, Ahrar al-Sham and Faylaq al-Rahman in the rest of the militant-held area.

Probably…. The idea now is to get the separate pockets to basically give up one at a time, and then turn the tiger forces and other SAA elements against the remaining pockets that refuse to give up..

It would be hard to argue with that plan. It’s solid.

I think they are pressuring the Southern Pocket to close it….. and then focus on the Northern part and close that pocket too… just an estimated guess…

i’ve read about this purported agreement last night on AMN and its terms arent very different than those applied to Aleppo. It’s basically a surrender by the jihadists.

The question is … Besieged by whom? The reality is of course that it is the “terrorists” that are actually besieging the civilians and want to keep them around to be used as “human shields” against the SAA

When you have been lying for so long then when the murky waters clear up you have trouble explaining many things. Yesterday I read a report on the BBC which said that 12000 civilians were fleeing rebel held territory under heavy “regime ” bombardment..but guess what.. they were fleeing towards “regime” controlled areas..or as the BBC put “towards government checkpoints”. If there is one good thing that has come out of the Syrian war is that organizations like the BBC, CNN , Al Jazeera and co have taken a major blow..

I would guess there are two reasons for the media sticking with the 400,000 claim.

1. It sells more. And the truth is that the news is a business and its first goal in life is to make as much money as possible. The truth is not as important s the bank account to these agencies.

2. It’s just easier to stick to the same story/figure. If you read these articles every day, you will notice that most of the article is just the same recycled information. Often times, its literally copy and pasted into each new article each day. Then they add a small bit of new information to the top.

I read both and they are owned by unconnected corporate owners .

Both have a very similar content that suggests it comes from the same independent agency.

I guess that’s pandemic, here in Mexico, the main stream media reports the same old shit that the rest of the west reports, very few are truly independent and relible.

Holland reports COMPLETE B*LLSH*T as Ever……

Only Zombies watch the Six O’ Clock News.. those People are Braindead….you can tell them anything and they’ll believe it….did they find any NATO or Mossad Peoples yet? Great going SAA & Allies….!!

The zombies even believe the weather forecasts on the “Six O’ Clock News” and that is wrong 50% or the time :)

It’s just unbelievable how most of the people can believe just anything they are told without questioning, debating or looking up second opinions or more different versions of the same events.

This is partly because there is a very refined way of manipulating Sheeples from Birth to Death…..It’s like Breeding Dumb People….. Dumb Folks are the easier to control and thus better for the Elite…. them don’t like difficult Questions & Revolutions….these days they are trying to Drug the Population…..with the Poppies from Afghanistan…. and why is it that America all of a sudden Legalised Weed? Which is a very good medicine btw, that’s why they made it illegal in the first place to sell more of their chemical medicines, not because they wanted to…. people are lazy & ignorant too…. they simply don’t want to know because they only care about their own Lives…

Yo! Jaishtards! Green Buses are waiting!

I keep seeing the words “green bus.” What does that mean?

The Syrian local bus fleets are painted green and it is often these busses that are used to transport terrorists who have surrendered, to other terrorist areas in Syria.

This is not as daft as it seems as it prevents densely populated areas being further immersed in war and the areas they are sent to are usually more isolated.

Idlib is the current preferred destination where these US Coalition of Terror gangs often kill each other in ‘turf wars’ similar to gangs in US cities.

Those terrorists who are not so radicalised and often from local areas often joined to ensure their families had food as food supplies are controlled by the gangs.

Only those who fought , dug tunnels or otherwise assisted the gangs got preference for food and medical supplies and many now wish to reconcile with the Syrian government and renew their lost lives in peace.

Only those who have committed heinous crimes are exempted from reconciliation.

It’s a nickname for evacuation buses taking the various terrorist gangs to Idlib. They are not necessarily painted green, the “Green” refers to the map color of green favored by the terrorists. So in the case of ISIS they would be “Grey Buses”….Hope that helps?

You don’t have to pay for your ticket…

Amin is a Persian

Do not believe such non sense. The true is that Russia killed 100 millions civil people in north Gouta. If you believed that why not to believe this. Judgement must be based on evidences, not on rumors.

I thought so as well. The latest from the same site is “President Erdoğan holds phone conversations with NATO Chief Stoltenberg and Ukrainian President Poroshenko ” …….seems a little strange to me.

PeakyBlinder
Reply to  You can call me Al

I have no clue if the numbers are true. But the fact that they killed a lot of people in an airstrike is not news and is true. Sadly, in war, every side hits tons of people with artillery and airstrikes. When it comes to urban areas, its hard to hit your target, and only your target, even with precision guided bombs. Every single side in Syria has hit non targets, and many times. This is a part of why war is so terrible.

The US demolition of 90% of Raqqa and the devastation of Mosul took over 6 months in each case and was totally indiscriminate . They were a re-run of the US assault on Falujah with illegal the use of depleted uranium projectiles in civilian areas.

Civilians are always the first to suffer in any urban warfare but Russia and the Syrian government have striven to mitigate such losses. Not doing so is humane but also sensible as the last thing President Assad or Russia wants is an angry populace that supports a protracted insurrection.

This is what happened to the US in Iraq and caused thousands of US deaths or injuries during their initial occupation of Iraq.

Hope the deal goes through ASAP. All the forces surrounding Duma for years will double the advance on the south. The deal might also include the Yabroud pocket controlled by JAI. As a cherry on top, no one will dare defend the terrorists in control down in the south. That may end the barking and allow the tigers to finish.

Boris the clown Johnson, is a disgrace to the term human being,he is hysterical in his lying about Russia,now he is saying that the fake poisoning was an attack on Europe. Maybe it’s not a bad idea after all to assassinate scumbags ,and he fits the bill.Then they can really have something to mouth off about.

I’m not a LIARRRR….. all these Russian Trolls everywhere 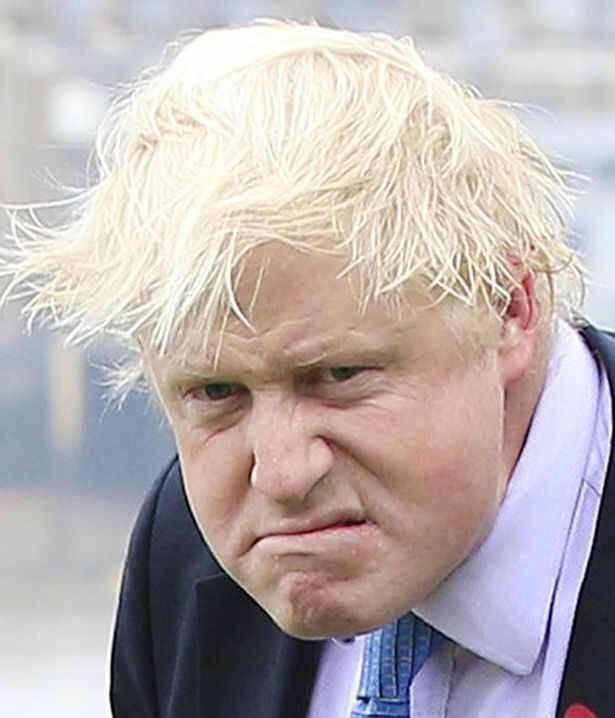 Looks like some snarly troll Trawler being told by his “fishwife” Gavin Williamson he isn’t getting his Tea and crumpet is mad as hell!

A re-post from a couple of days ago. Government and allied forces understood from the get go that Jaysh
al-Islam would be prepared to deal once HTS were no longer part of the
equation; hence, the urgency to split the pocket aqap, which they did. I
would expect Green buses to be arriving tomorrow and a cease-fire to be
announced during the evacuation period 09.00 to 14.00. That will leave
HTS and the al rahman brigade in the Southern rump and the rapidly
shrinking Harasta, latest reports suggest SAA units have overrun the
Al-Amaji area, which is almost 30% of the 0.8sq klms of this dime
pocket. Realise there has been a bit of added resistance by, Jaysh
al-Islam, particularly their refusal to allow civilians out during the
09.00 to 14.00 truce periods. But I really do hold out hope that a cease
fire will be announced shortly after 09.00 and then it is on to HTS and
their sly murdering accomplices al rahman. Kill’em all

This what I like about reading different news sources sooner or later you will find the truth.
I just watched and heard the TRUTH.

The title of the article has the wrong date!