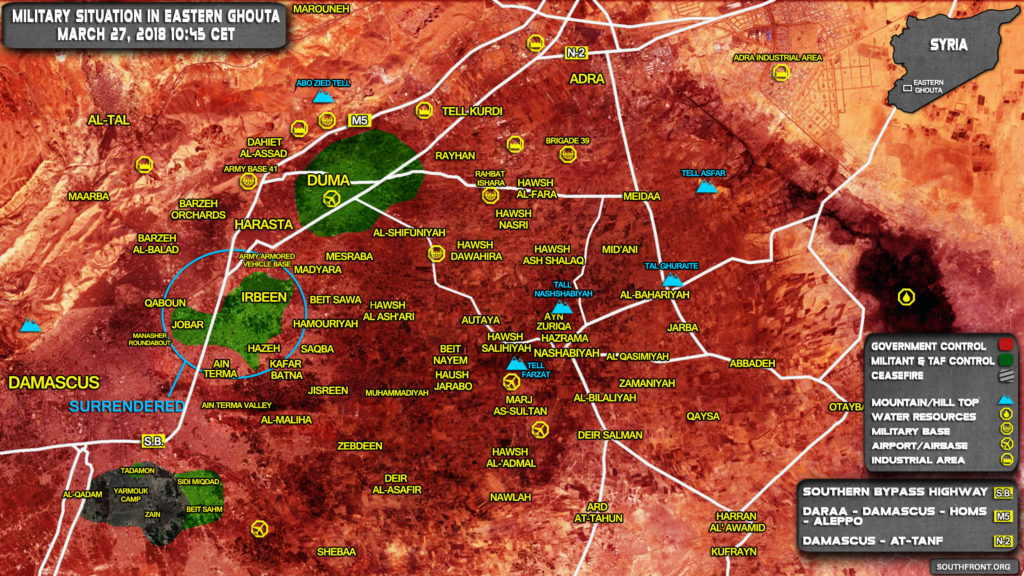 On March 26, 6,749 militants and members of Faylaq al-Rahman and their relatives left the southern part of Eastern Ghouta and were transferred using 110 buses to the militant-held part of Idlib province, according to the Russian Center for Reconciliation of the opposing sides in Syria.

Over the past three days, 13,190 militants and their family members have been evacuated from Eastern Ghouta. Faylaq al-Rahman also released 26 Syrian service members and civilians under the evacuation agreement.

A former membert of Faylaq al-Rahman on the situation in Eastern Ghouta:

On the same day, the Center said that over 114,000 people had left Eastern Ghouta via humanitarian corridors since the introduction of the daily humanitarian pause.

The Syrian Arab Army (SAA) has established full control of the area of Harasta abandoned by members of Ahrar al-Sham and is now preparing to enter the remaining militant-held areas in the southern part of Eastern Ghouta as militants withdraw.

The area of Douma remains the only militant stronghold in the region. Jaish al-Islam’s political leader Mohammed Alloush claimed on March 26 evening that the group is not going to retreat from the town. However, this statement is barely based on the reality as the area of Douma is now  fully besieged by government forces.

Government troops are in the town of Haza:

Syrian troops are in Eastern Ghouta:

You can call me Al
Reply to  TheRedBaronSS

You really are not bright enough to understand what is going on are you ?.

Internet is a source of awareness, due to which Washington and UK regimes have lost many strong partners in Asia and in Africa. The World leaders very clearly knows that Washington and UK regimes are the main conspirators, aggressors and invaders that illegally occupying the lands of many foreign countries for military bases. They have invaded Japan, Vietnam, Iraq, Afghanistan, Syria, Libya and so on and illegally occupying the lands of these countries. Dividing the nations and then combatting them.

Skripol and his daughter assassination attempt was Mossad and CIA conspiracy for typical goals. My question is from world leaders that they are with Russia or with Washington and UK regimes on Skripol spy case.

Most didnt. I didnt see any african south american or asian nations jumping in. Just waiting on sidelines to see if russia cracks or if the transatlantic alliance ruptures.

Half of the Europeans didn’t either, only those seriously pushing the one World government did.

Russia is strong enough and now economy is growing.

And you remain a divide and conquer agent for the Rothschild cabal in its City of London, which is behind all wars and other unrest, by constantly blaming SYMPTOM nations instead of THE ONE TRUE CAUSE which owns those nations. Which is the only possible reason you do not mention Israhell’s role in all of this.

You can call me Al
Reply to  Tony B.

Shut up Tony B, maybe he just made a minor mistake because they all are equivalent.

Tony B.
Reply to  You can call me Al

NO! They are NOT equivalent. That’s the whole point. Divide and conquer thinking insures that NOTHING WILL EVER CHANGE as it keeps the cabal comfortably outside of the thoughts of people who should know better. Such shallow thinking is the end of all of us as the cabal just continues humming along destroying the world and its people while people with your thinking enable them by enjoying your miserable desire to demonize anyone but those causing all the misery. Wake up!

Rob
Reply to  Tony B.

1. There was no real assassination attempt. It’s all fake. No one is allowed to see the “victims” because they are NOT victims. 2. Both Mossad and CIA are Rothschild agentry, THEY SIMPLE DO AS THEY ARE TOLD, just like practically every other financed organization in the world. Which means almost every entity. All the “goals” are Rothschild cabal goals. Always. Kneecappers and other prostitutes are cheap when YOU create all the financing out of nothing. Wake up!

usa politicans will you strike hezbollah, irgc, fatemiyoun, harakat? will you save Douma and help rebels? Haley what the fcuk you fake talked? Haley where are you now? no speak last 20 days, is it some deal with Russia and Turkey about transfer population? get the fcuk american dirty politicans