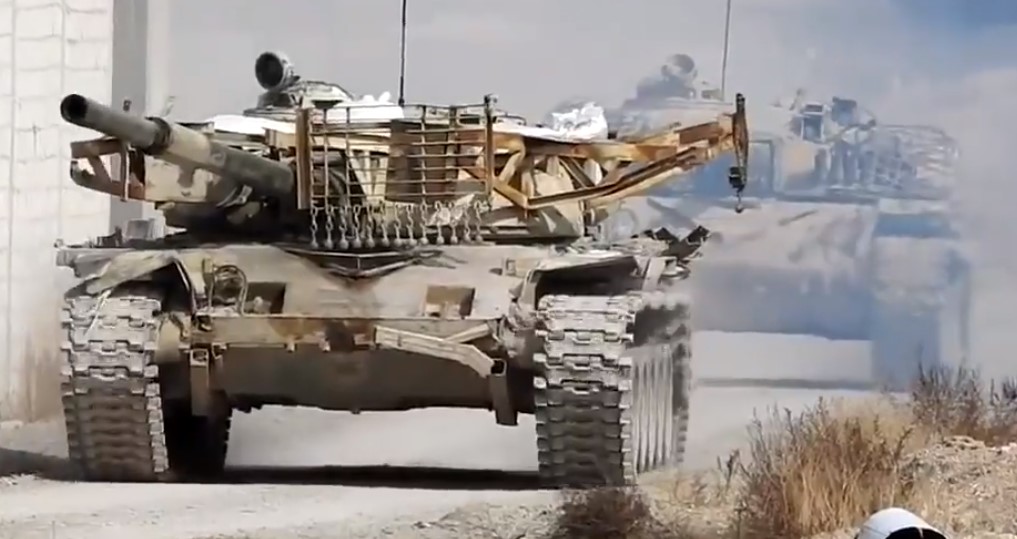 On March 6 and March 7, the Syrian Arab Army (SAA), the Tiger Forces, the National Defense Forces and other pro-government factions made important advancecs in the areas of of Misraba and Beit Sawa capturing the farm areas near these towns. Furthermore, government forces established control of the villages of Hawsh Ashari and Rayhan.

A photo-confirmation of the SAA advance in the farm area near Misraba and Beit Sawa: 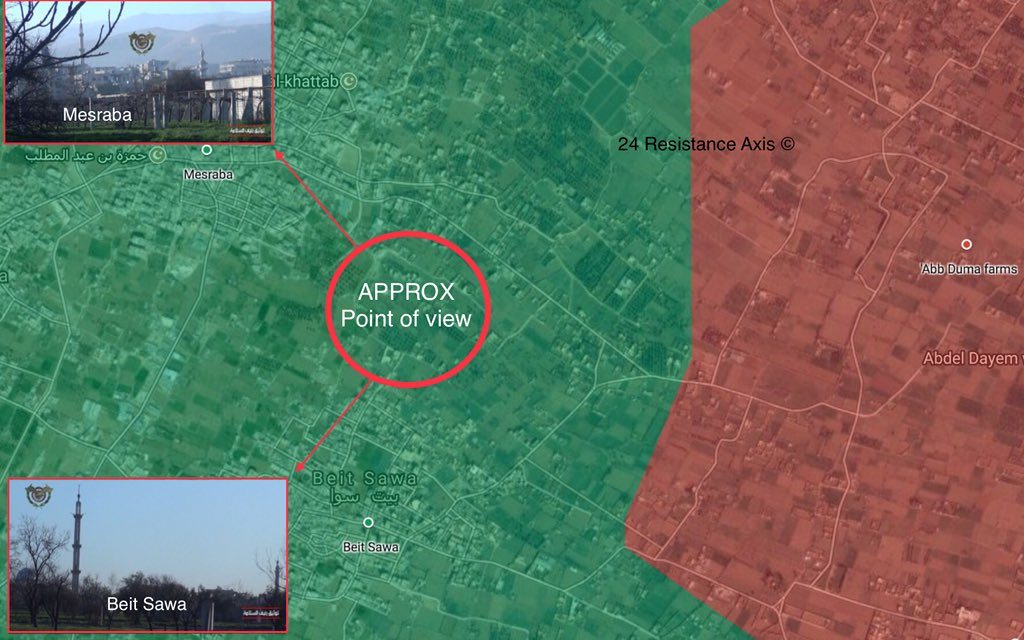 Additionally, the town of Hammouriyah surrendered to the SAA. Government troops started entering it. According to pro-government sources, negotiations are now ongoing in a few others villages across Eastern Ghouta.

On March 6, the White Helments, a notorious organization operating in areas controlled by al-Qaeda-linked militants, reported that “regime forces” had conducted a chlorine gas attack, which had allegedly injured 30 people in Eastern Ghouta.

It’s interesting to note that a new report about alleged chemical attack followed a Washington Post report that US President Donald Trump’s administration had discussed a possibility of a new “military action” against the Syrian government last week. The newspaper added that the “military action” will be a response to alleged chemical attacks conducted by the Assad government.

Earlier on the same day, the Russian Ministry of Defense offered militants a safe passage out of the besieged area via an opened corridor.

“The Russian Reconciliation Center guarantees the immunity of all rebel fighters who take the decision to leave Eastern Ghouta with personal weapons and together with their families,” the ministry said adding that vehicles would “be provided, and the entire route will be guarded.”

However, a spokesman for Faylaq al-Rahman publicly rejected the proposal. In turn, militants work to prevent locals from using the safe corridor to leave the besieged area. According to Major-General Yuri Yevtushenko, Head of the Russian Center for Reconciliation of the Warring Parties, only 17 people have managed to leave Eastern Ghouta via the Al-Wafideen humanitarian corridor by March 6.

A destroyed battle tank in the neighborhood of Harasta:

The last group of terrorists near the syrian capital is about to be finally eliminated. This means that the kikes have basically lost any possibiloty of regime change. Of course, there’s still the us/kurd problem, but they’re in an incredibly shitty position and they will be forced to leave.

Hope you are right regarding Yankee problems the other-side of the Euphrates. Have a strong impression the Yanks are getting ready to do something Big. Whether it is about extracting a big price because all their plans seem to be unravelling or they are plotting to murder the elected President or something else altogether. Hope these fatalistic thoughts of mine belong to me and will never see fruition. However, should something come to pass, I really, really hope the Russian Military meet it square on.

Compared with similar previous engagements in mixed urban areas, SAA is losing astonishingly few tanks and APC while progressing incredibly fast. Most videos show well coordinated combined arms units and accurate rather then intensive but blind artillery fire. Also, a lot of fighting seems to take place at night which indicates Russians finally supplying enough night vision eqp and Russian training and advisor teams doing a superb job. We’ll see how things will progress once they’re engaged in urban combat in places like Douma, but up to now SAA performance was straight A+…

Without proper training in tactics and correct use of weapons and equipment even good individual commanders are left commanding legions of the dead. Compared with 2011 when SAA were racing it’s tanks through Ghouta without support and getting it blown up by SPGs, today their crews show competence and even individual initiative – and the latter is what Arab armies in general and SAA in particular were always desperately short of.

The Syrians have attacked the easier bits first, which gives its units a habit of success, pushes the US head-chopping, heart-eating rapers and slavers into a smaller area as the demobilisation offers create a golden bridge, further to depress head-chopper morale. The US head-chopping, heart-eating rapers and slavers are probably dug in quite deep in the cities so once the hinterland has been occupied and minutely searched for tunnels and booby-traps, I expect that the Syrians will move forward an inch at a time. If they’re careful, they can still limit their casualties as they crush the pocket.

“The Syrians have attacked the easier bits first”

What’s that got to do with Arabs? The British army is full of shit commanders and has performed shittily in the middle east. Back-shooting Irish teenagers is much more its style.

In any army the commander is important. I don’t like to see Arabs being singled out as somehow being “bad”

What are we? Social justice warriors afraid of bad words in our safety zone? Yes, the commander in chief is always important, but a good NCO corps and good junior to middle officer corps is probably way more important. They are the glue that keeps any army together and they are the lubricant that make it work.

In Arab culture knowledge is power. There were stories of Western military trainers who had drilled an Arab tank unit to a decent standard, only to watch on in bewilderment as after the training the unit commander would take away all the training manuals from the lower ranks and collect them for himself. Knowledge is power, and if the commander sits on that knowledge he has the power. And that is why good officer, good unit, bad officer, bad unit is so important for Arab armies. More so then in the West where the failings of a bad unit commander can be compensated by his NCO’s and junior officers.

The last thing I am is an SJW. But I am from Iran and there is a lot of anti Arab feelings there. I know some Arabs such as Saudi have totally failed. But others have done fine. Yes a cultural change is needed to get effective military. But it is not racial.

You’re from Iran? Cool! I’ve been there three times! I love your country. They’ve always been very nice to me every time I was there.

Now, as for your post, I never said it was a racial thing. It’s a cultural thing. After all, Hezbollah turned to be a very effective Arab army. So it can be done.

Its the same in any army really Barba.

Some Commanders of the NDF have money but not all and that is what you are talking about when you mention these commanders of militias and not SAA regular forces helmets are always there some don’t use them. Military equipment depends on hand me downs and from captured equipment for distribution, as with light and heavy arms.

The militants in East Ghouta most be thoroughly demoralized. They know the war was lost long ago, supplies are short, many are surrendering or in negotiations to surrender. To fight and die there now seems utterly pointless.

I think the Syrian army’s key problem is manpower. After so much war many of their best are dead, and they have to rely on groups of local-area partisans who aren’t highly-trained or particularly committed. But they are losing less tanks than in, say, 2016 when their T72s were getting cooked off on a regular basis

blablabla! trump is the obama with a WIG yellow!!!

Placing those cage armor is useless. But yeah i don’t have the experience of rolling in said battleground to judge. Only things is their main anti armor is the wire guided TOW with much bigger warheads than that of stopped by the cage. Their RPG missile may have updated and modernized variant from the eastern Europe MIC that even those cage especially designed to counter will get through like it’s nothing.

the cages are still a very effective mean to stop heat warheads.

heat warheads are very sensitive and will go off when hitting the cage, or if the projectile is slowed (I remember reading an article on a defence review that described how these warheads will set off if they hit a leave on a tree).

going off hitting the cage, the formed jet will expend itself in the air between the cage and the real armor. To add to this, the jet is designed to be efficient in moving through metal, not through air. This means that its efficiency drops even faster, after hitting the cage.

The standard HEAT yes. What about tandem charges ? Their standard anti tank weapons have been upgraded into those of the TOW equivalent so i believe it offers no meaning. Though so yes the standard RPG missile they carried around still possess threat despite they have been used mainly to hit personnel in covers and by the picture it seems the tanks itself lack ERA.

in general, it depends on how the cage is done, since there is no standard design.

Even with tandem warheads, the TOW rockets fly slow, they are subsonic, and they aren’t made of any sturdy materials. So with a cage, their flight is in any case interrupted and or disrupted. That means that even a tandem charge efficiency is reduced, because it still needs to contact the armor inside strict parameters.

That doesn’t mean we are talking of a 100% protection – a tandem charge would surely have more chances than a single one.

But then again, the cage can be doubled as well, putting another layer of it 20cms or so behind the outer cage layer. its cost would be minimal and it would largely decrease the chances any double warhead would enjoy in getting the jet inside the tank.

Not very much info today. Hope if it has been costly, the price was paid in full by the Yankee head chopping proxies, HTS and their affiliates. In days gone bye No news was regarded as good news, hope it still applies.