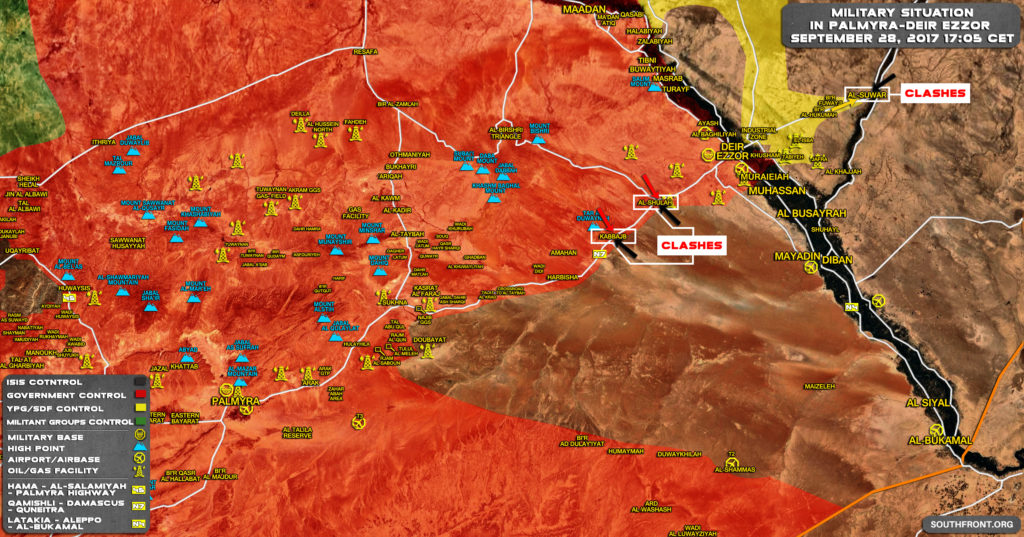 Initial reports of pro-government and oppositions sources claimed that ISIS fighters even captured al-Sukhnah. However, the Syria pro-government Muraselon news website reported that the Syrian Arab Army (SAA) recaptured Bir Ghabaghib, and is now preparing to repulse the ISIS attack.

The Syrian military closed the highway because of the ongoing clashes. The Palmyra-Deir Ezzor highway is a major government supply line to Deir Ezzor city. It’s used to transfer aid, troops and military equipment to the battle zone.

ISIS likely took advantage on a Hay’at Tahrir al-Sham (HTS) attack in the northern Hama countryside on September 19 that pushed the SAA to dedeploy its best units including the Tiger Forces from Deir Ezzor governorate to northern Hama. Furthermore, the Russian Air Force shifted its air campaign focusing on HTS in Idlb during the last week.

Meanwhile, the SAA and its allies advanced north of Deir Ezzor city on the eastern bank of the Euphrates river towards Hatlah Fawqani village. On September 26 the SAA captured Hatlah Tahtani village south of Hatlah Fawqani.

Meanwhile, clashes between ISIS and the US-backed Syrian Democratic Forces (SDF) continued in al-Suwar village northeast of Deir Ezzor city. Amaq claimed that the SDF lost 4 fighters and a vehicle in the clashes there on September 28.

SF reporting HTS and IS indirectly aiding eachother, which, acc to trollyboy Justin, may not be reported.

SAA losing control over a very important supplyroute, which is bad, very bad. Something several commenters over the months warned SAA against : SAA guard your flanks, your supplyroutes.

Meanwhile SDF has finished taking Al Suhwar and starting a southward drive. SDF related tweets indicate the drive on Markadeh (from the north?) has also started.

SDF is expecting the bordercrossings with KRG will soon be fully opened once Turkey, Iraq and Iran start to close their crossings into KRG.

I am looking forward to the map of next weekend. Hope you all will be too.

Aren’t you going to tell us how great your Jew cult SDF partners are, and how they’re going to defeat the Syrian government coalition and further their regime change partition drive for Israel that they’re constantly talking about?

“SAA losing control over a very important supplyroute, which is bad, very bad. Something several commenters over the “months” warned SAA against ”

So the SAA high command is taking advise from commenters here..wow..what an idiotic ISIS sympathizer..And by the way that supply route was opened about 2 weeks ago so commenters couldnt have warned against its cut off months ago..

More fucking stupid pro-terror knob-gobbling from our resident ISIS fanboi. IS raids against the supply line is expected, and the SAA has reserve forces available to react and plug the gaps and repel the foat guckers when they choose to expend their remaining manpower West of the Euphrates.

IS tactics are predictable as its what any competent commander would try to do in the same circumstance. Bottom line however is taht IS light forces conducting hit and run raids is not going to cause SAA to “lose control” over the DeZ-Palymra highway.

So predictable and so “business as usual” that the SAA have to bring the Tiger Forces back from Northern Hama to deal with the situation:

Once they reached DE, the SDF offensive south to the oil fields stalled a week ago. With their Jew world order Isis regime change partners giving them free passage to DE. It looks like Syrian government coalition intel and commando units operating behind enemy lines are preventing the SDF from advancing until the government’s main force moves the front lines on the east side of the river forward. Probably after they finish cleaning out DE. Though with reports of a second bridge going in south of DE. Once it’s complete they may move east into the oil fields from there.

You to dutchnational :”I can’t remember ever having seen any links or other proof in any of your posts” You above: “It looks like Syrian government coalition intel and commando units operating behind enemy lines are preventing the SDF from advancing until the government’s main force moves the front lines on the east side of the river forward.”

You have to make something up don’t you? Otherwise it would be inexplicable that the SDF wasn’t already on the Omar oil and gas fields. Because as we all “know” ISIS isn’t fighting SDF! lol

There are many reports, including on this site, that Isis let the SDF roll into DE unopposed. So I’m not going to post links. You’ve been here enough to see them. Do I have links or inside information about intel and comando operations east of DE? No. I do have USMC, mercenary special forces, private security and private shooting academy training, experience and certification. As well as weapons permits, NBC and other security clearances, and government advisory credentials. And in my opinion, for what it’s worth, there are Syrian government coalition intel and comando units east of DE working the area.

without any evidence your opinion is worthless

The Syrian government forces can’t afford to be delayed by these US/Zionist invasion forces from their vital battle to reclaim Syria’s natural resources and the Iraqi border on the Eastern banks of the Euphrates river especially Al-Bukmal. These are delaying tactics. The Syrian Army should move on full speed ahead towards Al-Bukmal and up towards the precious oil and gas fields. Let the Russian and Syrian air forces decimate these US terror proxies of the SDF now rebranded ISIS for the occation. In the meantime more Russian aircraft and troops are needed on these fronts. It’s obvious that what they have is not enough. As for troops the Americans and Zionists don’t want Iranian troops on Syrian soil is it? So let this be Syria’s response and the Zionsts’ worst nightmare: Ask Iran to send as many as 50,000 of their best troops now to confront the Zionist threat and finish the US/Zionist terror proxies once and for all, Urgently!

SAA and allied army forces should have to handover new liberated towns and villages to new recruiters in the areas and then they should advance for further goals.

Second each month government should have to send new reinforcement to the front.

Reports coming in that IS entered Al Suknah. Seems like whole Palmyra – DeZ support line has collapsed in one day. Somebody was posting about SAA not closing the battles, always running around and never getting the job done. Seems like thats the issue once again. T2 attack stalled the third time in a row. Alleged 15k Republican guard troops “freed” from DeZ City&Airport stalled east of Euphrates… Nothing new from SAA if you ask me. Should have closed east Hama pocket front weeks ago, and reinforce this streched DeZ supply line.

“Reports coming in that IS entered Al Suknah.”

Sounds like a typo, they mean al-Shula. Not true in any case.

This is just IS trying to push against SAA supply lines. defenses will necessarily be thin, but with rapid reaction forces kept available to plug gaps and repel raiders when needed. IS actions are anticipated. Panic is infantile and foolish.

I have recently commented that it’s not a right time to send reinforcements to Idlib frontline. It’s better forget about Idlib for a moment, and concentrate all best forces on the East. And the worst happened: no TF – no success, and SDF is going to Omar fields… As Russian folk saying: “do not chase two heirs simultaneously”…

‘It’s better forget about Idlib for a moment, and concentrate all best forces on the East.’

If they forget about Idlib for a moment, wouldn’t HTS just keep capturing villages/towns, villages/towns and keep on going and going? As you can see, no easy way out.

I did not mean the exposure of Idlib front. But I guess, you would agree, that offense takes much more resources than defense. It’s not possible to advance on many fronts at the same time. That’s why, IMHO, it would be better to attack in the Euphrates valley now, keeping just enough forces for the defence in Idlib.

Yes I agree – pound Idlib from the air and send whatever forces you can spare to the East, easier said then done with US proxies everywhere but all talk of taking back Idlib and Ghouta should cease, finish that Hama pocket and go East.

Twitter reports as of yet unconfirmed state that the bridgehead of SAA on the nort-east side of the Euphrates has almost been thrown back to the bridge, only two small villages remaining.

IS counterattacking in many places, both against SAA and SDF with sometimes surprising success.

A last flare up or a large underestimation of IS capabilities?

Unconfirmed twitter reports coming from a ziotroll like you are worthless hasbara propaganda. I can’t remember ever have seen any links or other proof in any of your posts. It’s just endless anti Syria psyops.

I can’t understand how ISIS have been able to attack the SAA’s main line of communication, the M20 Palmyra- Deir Ezzor Road.

Only a month ago you assured us “With satellite surveillance it’s difficult to move any quantity of people or equipment in the open desert undetected.” You then went on to boast that “the Russians have a multi layered surveillance capability including manned and un manned aircraft, recon and intel teams, local intel, and satellites. Combined they have a pretty good idea of what’s going on where.”

They probably saw Isis coming towards the road with a sizable suicide force. So they closed it for public safety and now they’re resolving the problem. It’s a war, these things happen in wars.

Or perhaps the Russian intelligence and surveillance isn’t as all knowing and all seeing as you make out….if this isn’t a hit and run attack then this would have required planning and coordination, assembling of vehicles and ISIS jihadists, assembling of ammo, food and supplies. The SAA should have been ready to beat back these attacks if forewarned by the Russians.

The fact that the Tiger Forces have been summoned to restore the situation tells you how critical this is. It looks like they were planning a major offensive in northern Hama.

The SAA, in needing the Tigers to counterattack and restore this vital supply line, has surely assessed that it isn’t a hit and run raid.

The Syrian government footprint has expanded steadily. These attacks have had minimal effect and are being dealt with.

Terse reply! I like the way you have avoided any further discussion on Russian surveillance capabilities in Syria. Are they deficient in this case? Also you have neatly side-stepped making any comment on the nature of the ISIS offensive – is it a raid or is it strategic counterattack as I maintain?

Does your immense experience as a USMC, mercenary special forces, private security and private shooting academy training, experience and certification not permit you to form an opinion on these crucial matters?

It’s had minimal effect on the government foot print, which continues to expand, and is being dealt with.