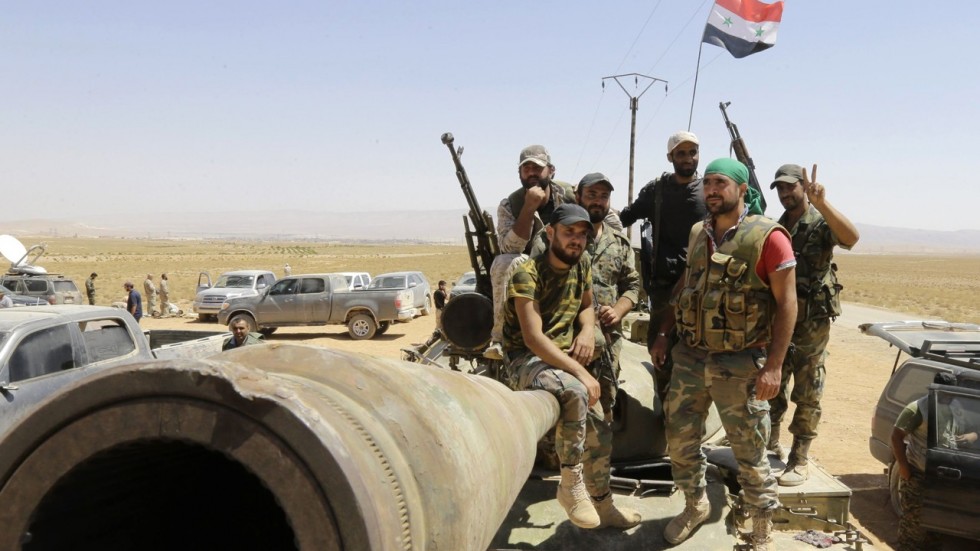 According to pro-government sources, the Syrian Arab Army (SAA) and its allies repelled an ISIS attack on Hatlah Tahtani village north of Dier Ezzor that had been recently seized by government forces.

The control over Hatlah Tahtani plays an important role in the ongoing standoff for Saqr Island east of Deir Ezzor. This island is a key position that government forces are seeking to retake from ISIS in order to tighten siege on ISIS units in the northern part of Deir Ezzor city.

The SAA also attempted to advance against ISIS near Khusham, but failed to achieve any gains. 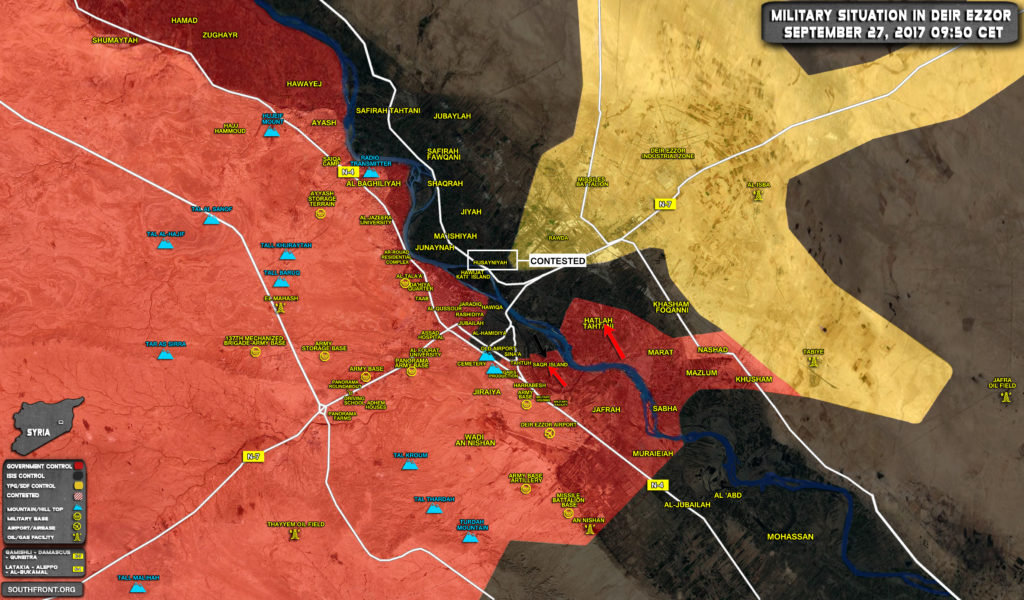 Meanwhile, government forces continued deploying additional military equipment on the eastern bank of the Euphrates River. The Syrian military is using a bridge established between the eastern and western banks by Russian troops.

On September 26, the SDF entered al-Suwar and pro-SDF sources declared it liberated. However, on September 27, the fighting was still ongoing in the area.

Summing up the recent developments, it’s clear that the both Syrian-Iranian-Russian alliance and US-led coalition are working to expand its striking forces in Deir Ezzor province ahead of a large push towards the border with Iraq.

At the same time, the SAA is conducting major efforts to isolate ISIS in the northern part of Deir Ezzor and to liberate the entire city.

Could you make a map showing since 2017, the amount of land taken back from ISIS by Syrian/Russian forces and another showing American coalition’s territory taken from ISIS?

We are going to release a video on this issue after the announced documentary about Hezbollah.

There was no land taken from ISIS by the so called US ilegal colonial imperialist invasion coalition. ISIS are US/NATO/Israeli speial forces under cover. ISIS simply change flag and outfit and become SDF, FSA, or Kurdish YPG according to convenience.

The SAA progress on the eastern side of the Euphrates has been less than brilliantly expansive so far. But that situation, should it improve,and improve against the Zionist [ USA ] intentions, combined with the progress of the thankfully legitimate and notably non-Zionist Iraqi PMU, shall swing the tide noticeably in favor of the anti-Zionist forces.

This isn’t a video game.

The long game is too leave ISIS embedded with the US and the separatists Kurds and create a cauldron as this progresses.While back in Raqqa the US bombs and kills civilians and no not all are out , they intend to wipe out the Arab population in the region and commit genocide of the Majority of the population in the North. The US has been complicit in this in Iraq and Syria and nothing different they did this after defeating Germany in WW2.

Why is SAA going north ? SAA must go south.

They already crossed the river and I don’t see much reason to go the the effort of crossing it twice when you can just push more forces across the current crossing and advance from there, unless cut off too badly by SDF, which so far they are not.

just saw the process of crossing the euphretus,a single pontoon boat,also issam and his men crossing ,a sinle rowing boat. i feel sorry for the syrian army.it is just pathetic, i dont know how they will ever fight the iserelis the saudis and americans, god help them.

SAA has to consolidate and secure its own logistics lines – they have lifted siege on Dier Ezzore city – but ISIS still occupy outer-laying northern positions that remain capable of ambushing SAA supply lines. The SAA advance to Dier Ezzore city cut through hostile ISIS occupied terrain – the front needs a consolidation process after the major strategic aim was achieved. The SDF/US SOF/Marines have merely cynically used the cover of the SAA advance and heavy battles with ISIS to advance southward facing little ISIS resistance – with intent of a Syrian land grab.

I don’t understand why because, they will need to cross the river to go south. When they crossed the river, they will have to make a quick operation to take omar fields. Otherwise, crossing the river at that location is useless.

Bro I saw an important comment here yesterday and I am going to repeat it..Syria has a government which is represented at the UN.A rebel force (even if supported by God) cannot just steal a countries resources. SDF taking the fields is for later negotiations. Syria will get its oil field s back..Whether the US and Kurds like it or not

Nonsense. There will be no negotiations! What for? Why negotiate something you already have? rf has basically lost its air bridge over Iran, Iraq, Syria, as well ability of Sy to finance itself in the future.

USA has successfully counter-attack SAA move and block them. SAA has just cross the river to cross th river but has not create an operation to quickly take Omar fields. USA has planned to block SAA moves way before.

What is really sad in all this is that Russia having been legitimately invited, is helping a legitimate government but is now playing defensive, while the uninvited is on course to partition Syria and is on the offensive and gaining ground. If this is not a typical example of ‘demonstration of might’, what is it!. Since UN is impotent (it never even has testicles to begin with), the other option is war, but is the world ready for that?

No one will be ready. Only few will be rady for Death … Yes it is a demonstration of Might. Russians are not on defensive policy but needs to be on defensive position and are on alert. Russia did not came to beat kurds, turks or arabs but to put it’s balls on the world stenght balance disturbing some others. Patience is the key of success, remember in sept.2015, a lot were waiting for a massive bombardment that would eradicate all form of life in different areas accross Syria. Now , 2 years later after the gains made slowly/softly but surely we can apreciate those victory remembering that Russia used it’s INTELIGENCE rather than its Arsenal.

Russia lost its plot when it retreated most of its aircraft from Syria, but mostly when it saved the Zio/Nazi terrorists from assured defeat by providing them safe heavens called ‘De-Escalation zones’ which became terrorist incubators. Since then the ranks of the terrorists have been replenished with thousands of mercenaries from all over the world through the Turkish border with the US, Turkey, UK and co providing intense training, weapons, tanks and ammunition to their terrorists with the aim of restarting the aggression against the Syrian state anew. All those gains you mentined are now under series threat. Very soon you will hear the chorus once again of Assad must go in gradual crescendo until the US/Zionist proxies launch an all out war against the sole legitimate, democratically elected Syrian government and president.

It is a demonstration of the ability to defend abortion rights in the oil fields.

What the hell are you doing Syria? You are going wrong way! What do you expect to get going to the opposite direction of the oil and gas fields and the crucial Iraq border? Fresh salmon for dinner? Deir Ezzur city has been stripped of its Industrial zone and is being stripped of its vital oil and gas resources by the US/Zionist/SDF/Kurdish/ISIS colonial imperialist coalition. How are the children of Deir Ezzur going to find jobs and feed themselves in the future if their life line is stolen from them and annexed to a US/Zionist artificial vassal state called Rojava? Syria and especially Russia, you are pathetic!

Maybe to secure the Iraqi – Syrian border; just a thought.