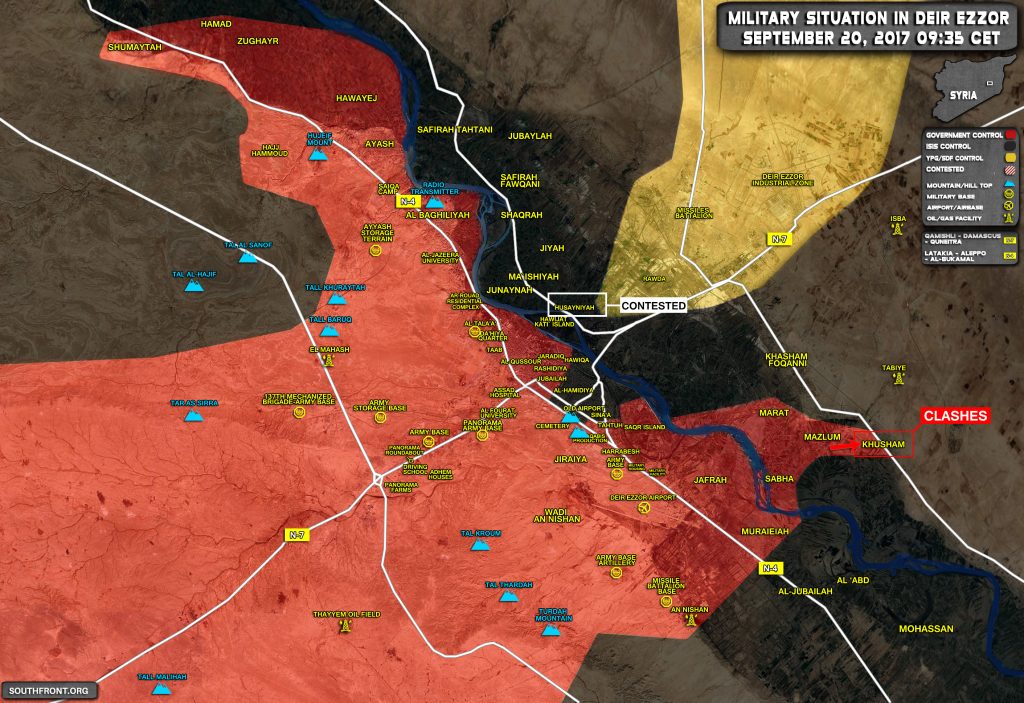 On September 19, Syrian government forces consolidated their gains on the eastern bank of the Euphrates securing Sabha, Mazlum and Marat villages, and stormed ISIS positions in Khusham village northeast of Deir Ezzor.

At the same day, the ISIS-linked news agency Amaq claimed that 3 Russian soldiers have been killed near Khusham. Amaq released graphic photos aiming to confirm the claims. However, photos allow to suggest that the killed fighters were likely private military contractors (PMCs) supporting the SAA advance.

Russia-linked PMCs are actively participating in the operation in Deir Ezzor province. While Russian military servicemen in general play a role of military advisers, Russia-linked PMCs may be involved in a direct combat against ISIS. Some sources link the successfull crossing of the Euphrates by government forces with a deep involvement of this force in the combat.

On September 20, a fighting continued between the  SAA and ISIS in Khusham. Government troops entered the village, but didn’t captured it yet.

If the village is liberated, government forces will be able to expand its control in the both eastern and western directions.

On September 19 and 20, the US-backed Syrian Democratic Forces (SDF) further advanced against ISIS in an attempt to reach the Euphrates from the northern direction. Firefights between the SDF and ISIS were reporrted near Husaniyah, Jiyan and Maishiyah.

Meanwhile, US-backed forces started moving a large number of military equipment to Deir Ezzor frontlines. Photos of at least one military column appeared online. Syrian analysts say the US-led coalition and the SDF will attempt to prevent the SAA advance on the eastern bank of the Euphrates.

Summing up the recent developments, it’s clear that the both Syrian-Iranian-Russian alliance and US-led coalition have notable chances to seize oil and gas infrastructure located east of Deir Ezzor on the eastern bank of the Euphrates. The result of this race will depend on the ability of the sides to concentrate striking forces that could achieve this goal in a relatively short term.

Kill them all, even with US supporters…

Air dropped troops and military hardware in strategic areas behind enemy lines will accelarate the advance. Russia and Syria have the means and trained personnel for it. They need to utilize this asset. After all they are figting for Syria’s survival and freedom from Western colonial rule while the Kurds, SDF aka ISIS to bring back the Western colonial domination of Syria and the looting of its natural resources. So costs what it may, the Syrian government troops and allies need to reclaim those valuable and vital assets for the Syrian state and its people.

Google is paying 97$ per hour,with weekly payouts.You can also avail this. On tuesday I got a great new Land Rover Range Rover from having earned $11752 this last four weeks..with-out any doubt it’s the most-comfortable job I have ever done .. It sounds unbelievable but you wont forgive yourself if you don’t check it !si292d: ➽➽ ➽➽;➽➽ http://GoogleNetJobsTimeWorkFromHome/more/cash… ★✫★★✫★✫★★✫★✫★★✫★✫★★✫★✫★★✫★✫★★✫★✫★★✫★✫★★✫★✫★★✫★✫★★✫★✫:::::!sf262l..,..

Be sure. They have a plan (SAA and all allies) und often these plans were good and surprised us all.

That yellow tongue penetrating from the north must be cut:)

This is the way to deal with Jew world order terrorists: “Syrian Army ambush in Deir Ezzor has deadly results for ISIS” https://cdn.almasdarnews.com/wp-content/uploads/2017/09/995-918×516.jpg

The USA and puppet NATO Elements SDF,FSA,ISIS moderate rat’s are runing out of tunnels.George Bush used to smoked them out.The Russian are digging them out.All the strategy positions in Britain are run by ISIS.From the mayor etcetera.

I have information that in a bid ro release more fighters to fight in Deir Ezzor, US is buying off the ISIS commanders in Raqqa and the battle for the city will soon come to an end maybe in the next few days. Meanwhile, the report coming from the SDF side in Deir Ezzor is that plan is in place to cut the SAA off to the north of Marat and then quickly block them off to the east. They are very sure of themselves and never displayed any lack of courage or uncertainty to their plan. In fact, they are already making good on their plan as they have already made some inroads eastwards aiming above the current SAA position (SouthFront current position map doesn’t appear to be current as events on the ground are developing quickly). If SAA wants to make it difficult for them and consolidate their gains, they must move up up north and not east to cut them off from the shorter point and have them try their luck from further up north. Or even attempt to ‘Air Drop’ somewhere northerly. Things look to get messier within the next several days.