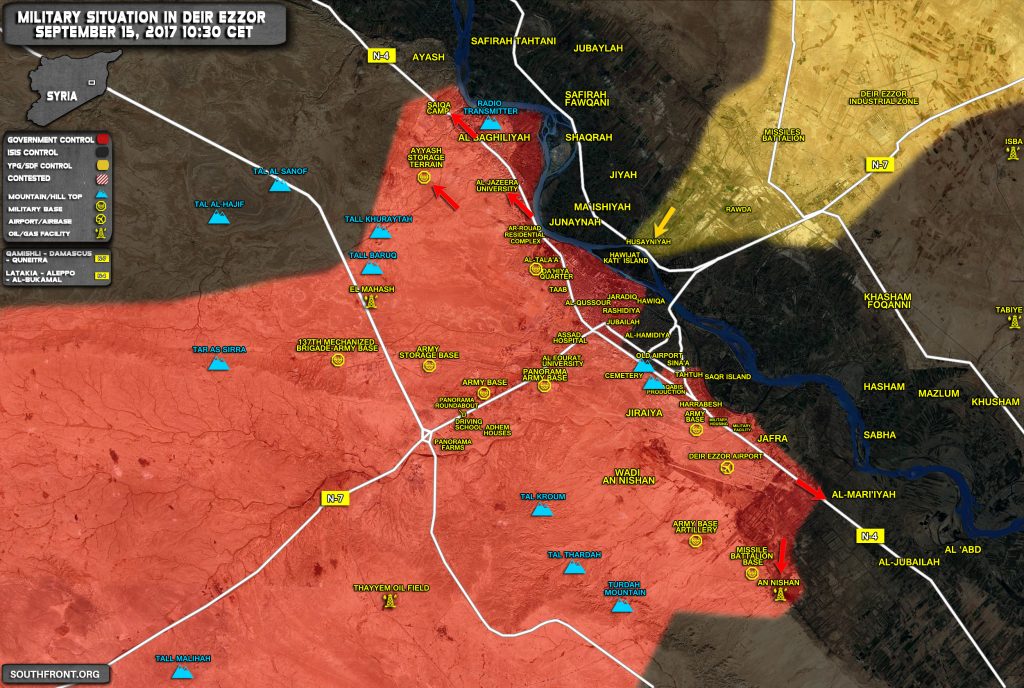 On September 15, the Syrian Arab Army (SAA), the Syrian Republican Guard (SRG), Hezbollah and their allies continued operations against ISIS in the area of Deir Ezzor city.

Troops advanced on Ayash northwest of Deir Ezzor city amid an intense fighting with ISIS units. Some pro-government sources even claimed that the SAA and its allies already entered the village. However, this still has to be confirmed.

Government forces conduct their anti-ISIS operation on the western flank of Deir Ezzor city using their advdantage in free manpower in the area. ISIS units are de-facto encircled in the area between southern Raqqah and western Deir Ezzor that had beeen created as a result of the advance of the US-backed Syrian Democratic Forces in northern Deir Ezzor.

ISIS poses a notable resistance to the advancing government forces but they don’t have enough resources to get a upper hand in this battle.

On September 14, the SAA, the SRG and their allies liberated Baghiliyah, the missiles base, the Hajjanah regiment, the radio transmitter station, the al-Jazeera university, the Saiqa Camp, the Nishan oil field, the Nishan gas station and the water pumping station east of Thurdah mount as well as the Dhamn base and the al-Kurum hill. 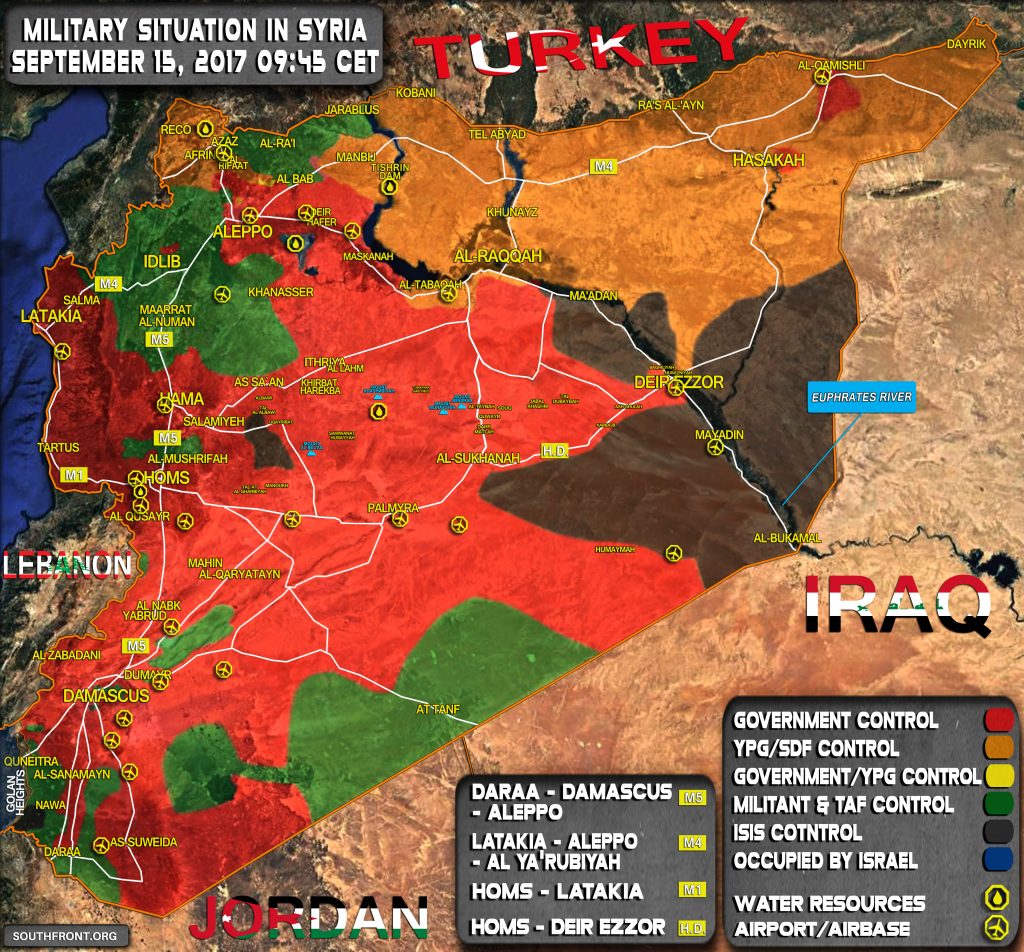 The Russian Aerospace Forces have destroyed over 790 instalations of terrorist groups in Syria over the past week, an official newspaper of the Russian Defense Ministry, Krasnaya Zvezda, reported on Friday.

According to the newspaper, Russian waplanes carried out over 330 sorties while UAVs conducted over 170 reconnaissance flights and found over 520 terrorist facilities.

No need and no rush to fight in the city. Civilians will be moved out and bastards encircled.

They are securing the outskirts before final push.

They generally refuse to be drawn into urban battles if it’s at all avoidable. After Aleppo SAA tactics is to out maneuver Daesh from large areas of territory and commit to battles in places Daesh decides to defend. And then they blast the crap out of it with arty and AF first. This saves time, resources and blood. US on the other hand seems to be using WW2 Soviet military textbooks – encirclements, followed by artillery barrage and frontal infantry attacks. I guess it makes sense if you have 1000s of proxies willing to die for you and nobody to hold you accountable for destruction and “collateral damage”…

Great Map, Thanks so much Dustil schmit

Hey SouthFront, I think there will quite soon be a new front for you to cover. This time in Swedenistan, Europistan. Last night big riots in Trollhättan and Uppsala and many fire department forces around the country being ambushed, and several hospitals under siege as they are filled up from gang wars. Some visitors, some want to “finish the job”. Grenades are now cheaper than hamburgers in Swedenistan. Of course this has been going on for months but no MSM covers it so there is a void to be filled.

Who cares ??? It’s better to cover how the west is killing hundred thousand of Muslims each year. Nobody told you to take them. And they told you to leave their lands.

You’re correct, I didn’t mean it would be prioritized above Middle East fronts. But wanted to point out how it’s ironic how the violence inflicted abroad comes back like a boomerang. I think Hayat Tahrir al-Swedensham will be up and running soon.

The west helps them. The west deserves sharia. I hope one day, Europe will end like Syria.

I don’t think that Sweden has been violent to anybody. And those that make problems there, they are the same material as HTS, ISIS etc hidden under the human rights protection..

Yes, the Swedes have to suffer horridly due to their leaders being cheap slaves for the zionazi Empire.

Did anyone expect something different? Might this be the reason, why H, Cz, Pl and Sk do not want moslims in the countries?